Students can go through AP State Board 7th Class Social Studies Notes Chapter 21 Devotional Paths to the Divine to understand and remember the concept easily.

→ Ramanuja Acharya was a staunch devotee of Vishnu. He propounded the doctrine of Visishtadvaita or qualified monotheism according to which the soul even when united with the Supreme God remained distinct.

→ The Virashaiva movement was initiated by Basavanna. The Virashaivas argued strongly for the equality of all human beings against and scriptural ideas about caste and the treatment of women.

→ Maharashtra saw a great number of saint poets. The most important among them were Jnaneswar, Namdev, Eknath and Tukaram, Sakkubai, and the family of Chokhamela.

→ The saints of Maharashtra rejected all forms of ritualism outward display of piety and social differences based on birth.

→ A number of religious groups such as Nathpanthis, Sidhacharas, and Yogis advocated renunciation of the world.

→ Sufis were Muslim Mystics. They rejected outward religiosity and emphasized love and devotion by God and compassion towards all fellow human beings.

→ Islam propagated strict monotheism or submission to one God. It also rejects Idol worship and considerably simplified rituals of worship into collective prayers.

→ Among the great Sufis of central Asia were Ghazzali, Rumi, and Sadi.

→ During the Delhi sultanate, the Chishti silica developed in the Indian subcontinent. It had teachers like Khwaja Moinuddin Chishti of Ajmer, Qutbuddin Bhaktiar Kaki of Delhi, Baba Farid of Punjab, Khwaja Nijamuddin Auliya of Delhi and Bandanawaz Gisudaraz of Gulbarga.

→ The period of the thirteenth century saw a new wave of the Bhakti movie in north India.

→ Mirabai, a Rajput princess, devoted herself to Krishna and composed innumerable bhajans expressing her intense devotion.

→ A most unique feature of most of the saints is that their works were composed in regional languages and could be sung.

→ Kabir, the most influential saint, openly ridiculed all forms of external worship, of both Hinduism and Islam. The pre-eminence of the priestly classes and caste system.

→ Kabir believed in a formless Supreme God and preached that the only path to salvation was through Bhakti or devotion.

→ Guru Nanak emphasized the importance of the worship of one God. He insisted that caste, creed, or gender was irrelevant for attaining liberation.

→ Yogi Vemana of Andhra Pradesh wrote about the foolishness of the ignorant about aspiring to know God and union with God.

→ Advaita: A Vedantic doctrine that identifies the individual self with the ground of reality.
(Or)
The doctrine of the oneness of the individual soul and the supreme God. It was propagated by Sankaracharya.

→ Salvation: PreservatIon or deliverance from harm, ruin, or loss.
(Or)
The process of saving the soul from sin and its consequences

→ Alvars: The devotees of Lord Vishnu.

→ Nayanars: The devotees of Lord Shiva.

→ Yogasanas: Positions and postures of the body in a systematic way.

→ Bijak: One of the earliest of the major texts in modern Hindi, which Includes the compilations of compositions of Kabir.

→ Abhang: A form of devotional poetry, sung in praise of Hindu God, Vithala. 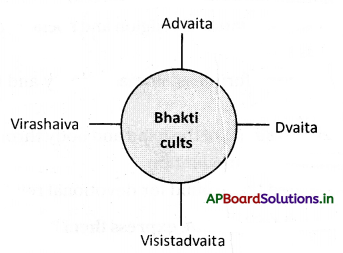 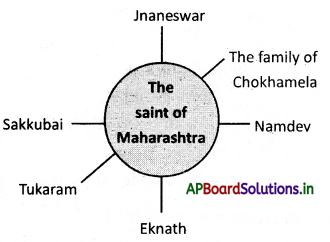 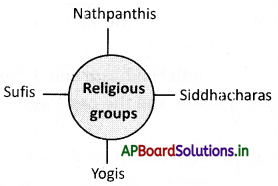 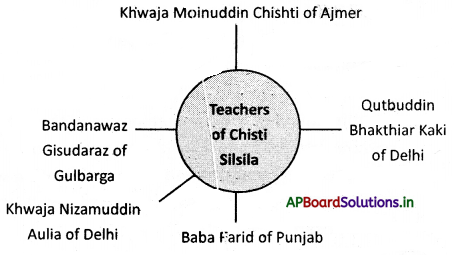 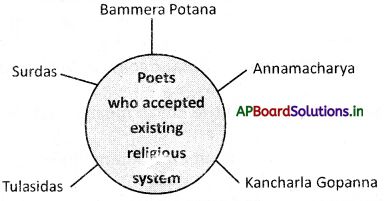 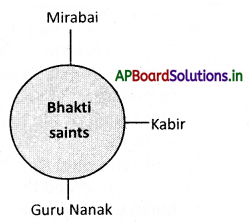