Students can go through AP State Board 8th Class Biology Notes Chapter 3 Story of Microorganisms 1 to understand and remember the concept easily.

→ Microorganisms are very minute living things. We cannot see them with our naked eyes.

→ Microorganisms are present everywhere in our surroundings.

→ They live in water, air, soil, and even in ice-cold climates to hot springs.

→ We can see microorganisms with the help of a Microscope.

→ Microbes are present everywhere in our surroundings.

→ Bacteria, Fungi, Protozoa, and Algae are major groups of microorganisms. Which lie between living and non-living organisms. They can reproduce only in host living cells.

→ Viruses are special types of microorganisms, which lie between living and non-living organisms. They can reproduce only in host living cells.

→ Microorganism: An organism that can be seen only with the help of a microscope and that typically consists of only a single cell.

→ Microscope: An instrument that makes very small objects able to be seen magnifying them greatly.

→ Bacteria: Organisms not able to be seen except under a microscope, found in rotting matter in the air, in soil, and in living bodies.

→ Fungi: A single-celled or multi-celled organism without chlorophyll that reproduces by spores and lives by absorbing nutrients from organic matter.

→ Protozoa: Any of a large group of single-celled, usually microscopic, eukaryotic organisms such as amoebas, ciliates, flagellates, and sporozoans.

→ Micro Arthropods: Micro arthropod is an invertebrate microscopic animal having an exoskeleton (external skeleton), a segmented body, and jointed appendages.

→ Virus: A virus is the smallest infectious agent that can replicate only inside the living cells of an organism.

→ Discovery: Be find, find out about show, reveal.

→ Invention: The creation of something new, origination.

→ Staining: A dye used to color organic tissue so as to make the structure visible for microscopic examination.

→ Typhoid: Typhoid fever ¡s an acute illness associated with fever that ¡s most often caused by the Salmonella typhi bacteria.

→ Bread Mold: A dense cottony growth of fungus of Rhizopus on bread and other foods.

→ Hay: Grass that has been mown and dried for use as fodder.

→ Decoction: Extracting the flavor or desired substances by boiling.

→ Decompose: Broken down of organic matter physically and chemically by bacterial or fungal action or rot.

→ Scabies: To scratch; Scabies is an easily spread skin disease caused by a very small species of mite.

→ Symptoms: Itching, especially at night; Rashes, especially between the fingers; Sores (abrasions) on the skin from scratching and digging.

→ Polio: Poliomyelitis (Polio) is a viral disease that can affect nerves and can lead to partial or full paralysis.

→ Smallpox: Smallpox is a disease caused by a poxvirus that is transmitted from person to person that causes high fever, characteristic rash, and may kill about one-third of infected.

→ Chickenpox: Chickenpox ¡s a highly infectious disease characterized by a fever and rash.

→ AIDS: AIDS (acquired immunodeficiency syndrome) is the final stage of HIV disease, which causes severe damage to the immune system.

→ Tuberculosis: It is a contagious bacterial infection that involves the lungs, but may spread to other organs.

→ Septicemia: Septicemia is bacteria in the blood (bacteremia) that often occurs with severe infections.

→ Malaria: Malaria is a parasitic disease that involves high fevers, shaking chills, flu-like symptoms, and anemia. Transmitted by a mosquito.

→ Smear: A mark or streak of a greasy or sticky substance. 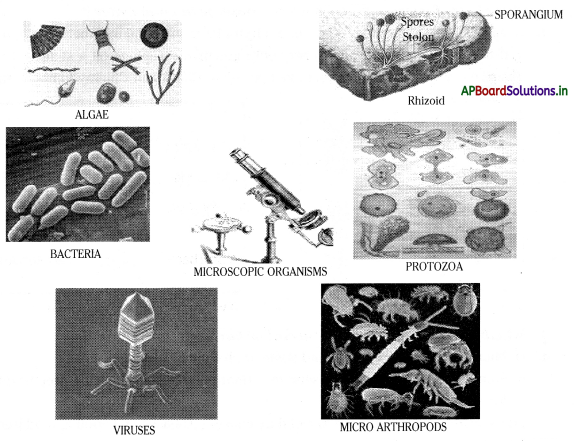 → There are several bacteria growing on our skin. Many of the disease-causing ones live in some symbiotic relations with other Bacteria. There are different kinds of bacteria in our intestine which are useful for indigestion. Bacteria are found everywhere in lacks in soil, water, air, etc. (Recently two types of bacteria in 1997 Heide N. Schulz discovered. The biggest bacteria Thiomargarita Namibiensis found in coastal waters of Namibia (0.75 mm), which can be seen with the unaided eye).

→ Micro arthropods:
Some microarthropods are very important for the soil. They help in increasing soil fertility by decomposing the biomass through digestion which converts the big¬ger compounds into smaller compounds. These are to be found on our skin, eyelids, beddings, rugs, etc.

Some microarthropods cause diseases like scabies e.g.: scabies mites. Actually, these are not microorganisms like bacteria, but they are minute arthropods and also called joint-legged organisms.

→ Soil is highly rich in microorganisms such a bacteria, fungi, protozoa, microarthropods. The top eight inches of the soil of a one-acre area may contain as much as five and a half tons of fungi and bacteria. This is very much useful for growing crops. But excess use of pesticides kills these micro-organisms. We can see them through a mi¬croscope or by growing them in different media.

Electron Microscopic view of some Viruses

→ They can only be seen through a very powerful electron microscope. Diseases like polio, swine flu, conjunctivitis, smallpox, chickenpox, and AIDS are caused by viruses.

→ Bacterial Staining?
Bacteria are very small/ tiny micro-organisms. We must stain before seeing Bacteria under a Microscope. Smear bacteria on a slide and slightly heat the slide. Then put drops of crystal violet on the slide. After 30 to 60 seconds gently wash the slide. Dry the slide and now watch the slide under the microscope in 25 X or 40 X.

→ Dr. Yellapreggada Subba Rao:
Dr. Yellapreggada Subba Rao was born in the West Goda vañ district of Andhra Pradesh state in India. He was a renowned biochemist arid received several awards for his contributions to the field of medicine. He developed methods for the production of several drugs such as folic acid, tetracycline, and anti-cancer drugs. Tetracycline is used in curing the plague. Dr. Y Subba Roo was considered the Wizard of the wonder drugs.