Students can go through AP State Board 8th Class Social Studies Notes Chapter 15 Law and Justice: A Case Study to understand and remember the concept easily.

→ If you have to make a complaint to the police, it is necessary to file an FIR at the police station.

→ A copy of the FIR should be given free of charge to the person making the report.

→ One important function of the police is to investigate any complaint about the crime.

→ It is not the job of the police to punish the accused.

→ Civil cases are related to people’s rights over land, property, income and people’s relationships with one another.

→ The police take charge of the criminal case because it is a violation of law made by the government.

→ Bail is a right of the accused.

→ A criminal offence is registered as a public wrong.

→ The judge is like an umpire in a game and conducts the trial impartially and in an open court.

→ One of the central features of the Constitution is to separate the powers of Executive, Judiciary and Legislative.

→ Each state has a High Court which is the highest court of that state.

→ Accused: The person who has done something wrong.

→ Offence: A breach of law or rule; an illegal act.

→ Arrest: To seize a person by legal authority or warrant.

→ Summons: An order to appear before a judge or magistrate.

→ Witness: One who furnishes evidence.

→ Fair Trial: A trial by a neutral and fair court.

→ Judgement: The legal document stating the reasons for a judicial decision.

→ Appeal: To make a serious or urgent request to the public.

→ Breach of contract: Failure to do something that is required in a contract.

→ Public Prosecutor: A law officer who conducts criminal proceedings on behalf of the government or in the public interest.

→ Bail: The temporary release of an accused person awaiting trial.

→ ‘Magistrate: A civil officer or judge who administers the law, especially who conducts a court that deals with minor offences. 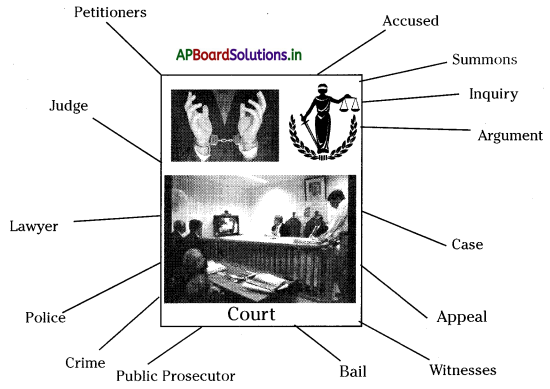