Students can go through AP State Board 9th Class Social Studies Notes Chapter 6 Agriculture in India to understand and remember the concept easily.

→ Agriculture is an age-old economic activity in our country. Farming varies from subsistence to commercial type.

→ Commercial farming: The main characteristic of this type of farming is the use of higher doses of modern inputs, chemical fertilizers, insecticides, and pesticides in order to obtain higher productivity. The plantation is also a type of commercial farming.

→ Agriculture crops depend on seasons and natural resources such as soil, water, and sunshine for cultivation. India has three cropping seasons.

→ Major Crops: A variety of food and non-food crops are grown in different parts of the country.

Major crops grown in India are:

→ Millets, Pulses, Sugarcane, Oilseeds, Tea are some other important crops.

→ Horticulture Crops: India is the largest producer of fruits and vegetables in the world

→ Environmental Effects of New-Agricultural Technologies: The Green Revolution has brought in several environmental imbalances: In Punjab, Haryana, and parts of Uttar Pradesh, most farmers have shifted to the cultivation of HYVs of rice and wheat, which require plenty of water.

→ The food security of a nation depends on agriculture. A variety of raw materials required for industries are cultivated on farms. Agriculture is also a major source of livelihood for millions.

→ Two kinds of people are engaged in farming – agricultural laborers and cultivators.

→ A variety of crops are cultivated by farmers in India. They are food grains and non-food grains.

→ There are two challenges for the country

→ Agriculture crops depend on seasons and natural resources such as soil and water and sunshine for cultivation. Temperature and humidity conditions are important

(b) The Second Phase – Green Revolution and its Spread: The government introduced a new kind of seeds to the Indian soil It was also accompanied by the use of chemical fertilizers, machinery such as tractors, and others besides irrigation facilities. High Yielding Varieties of seeds and fertilizers were the key elements of new agricultural technologies.

→ Effects of Green Revolution: The spread ofHYVs to large parts of the country and to newer crops have led to a significant increase in crop production in the country. As a result of the import of food- grains from other countries were reduced. Today farmer is able to produce nearly 800 kilograms of foodgrains per acre of cultivable land

→ The Green Revolution has brought in several environmental imbalances.

→ Green Revolution: It is a specific program introduced to increase the productivity of agriculture by using a high-yielding variety of seeds.

→ Organic Material: The material obtained from degrading all the biological waste in the compost pit can be termed as organic material.

→ Dryland Agriculture: The agriculture carried on the lands which cannot easily be irrigated is known as dryland agriculture.

→ Modern Farming Practices: The use of High Yielding Varieties of seeds, fertilizers, and use of machinery, etc., are modern farming practices.

→ Bio-chemical: Bio-chemical fertilizers are prepared by using biological materials. often they are used to enrich the soil.

→ Tropical climate: The hot climate which can be experienced within the tropics.

→ Environmental imbalances: Any disturbance created to our natural surroundings in which we live or exist. e.g.: Reduction in groundwater levels etc. 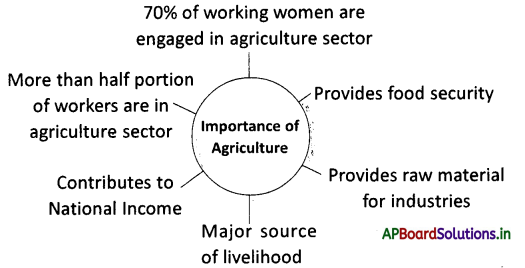 → High Yielding Varieties: High Yielding Varieties of seeds and fertilizers were the key elements of new agriculture technologies. The HYV5 seeds grew well when fertilizers and water were used; they had larger amounts of grain and shorter stalks and a short period of maturity in most cases. The short period of maturity also enables double cropping-farmers can to use their lands more than once a year.

→ This policy was initially implemented in Punjab, Haryana, Western Uttar Pradesh, and in some districts of Andhra Pradesh and Tamilnadu. The HYV seeds required a lot of water and these areas were already irrigated. The new variety of wheat was grown in Punjab, Haryana, and Western Uttar Pradesh, while the rice was grown in Andhra Pradesh and Tamilnadu.

→ Organic Farming – The experience of a farmer in Odisha: In order to overcome the ill effects of the Green Revolution, farmers in India have begun to adopt different farming practices. Let us look at an example. Aged 80, Natwarbhai is a resident of Narishu village, near Niali in Cuttack district, Odisha. A retired school teacher, he has been practicing organic farming for the last decade or so, and swears by its potential to feed India’s population. He says some of the varieties he grows yield over 20 quintals per acre, higher than the so-called ‘high yielding varieties that farmers around him get after using chemical fertilizers and pesticides. And he spends much less since his main inputs are gobar, natural pesticides when occasionally needed, and family labor.

→ Natwarbhai was earlier a ‘modern’ farmer. One day, while watching a laborer spray Carbofuran (a highly toxic pesticide), he was horrified to see him stagger and collapse. Rushed for treatment, the worker survived, but not Natwarbhai’s faith in the new agriculture. Especially after the laborer told him: “I could not breathe, my head was reeling”; and especially after, having buried the remaining stock of Carbofuran in a pit in his fields, Natwarbhai “saw dead snails, snakes, and frogs floating in the water that had accumulated there. “I immediately wondered what would be happening to the earthworms and micro-organisms that I knew kept the soil alive.” Natwarbhai switched to organic inputs, but with the high yielding varieties that them all, noting down their names, characteristics, and productivity.

→ What is fertile soil?
To be fertile, the soil has to provide the roots of plants with the right amounts of water, minerals, and air. To do this, it must have the correct texture and the correct composition. Soil is composed of mineral particles (which come from the breakdown of rocks) as well as organic components (which are or have come from living organisms). To be available to roots, the minerals must be dissolved in the water.

→ Why Government buys and stores some grain?
A lot of grain comes into the market at harvest time. One problem farmers faced was the low price of grain during this time. This means farmers were not able to sell grain at a high enough price to be able to repay their loans and continue using the new farming methods. They need to be protected from traders who might try to purchase the grains at low prices. Therefore, the government decided to set a Minimum Support Price (MSP). A Minimum Support Price is a price at which the farmers can sell their grain, if they want, to the government. The government sets the MSP so as to cover the cost of cultivation and allow a little bit of profit to the farmer. Because of the MSP, farmers are not forced to sell their grains at cheaper prices to the traders.

→ The Food Corporation of India (FCI) was formed by the government to purchase food grains from the farmers and store them. It keeps stockpiles and supplies grain to ration shops and other government schemes (e.g. for midday meals in schools).