→ Many Christian missionaries came to India along with the European companies to preach Christianity in India.

→ The Europeans introduced the printing press in India.

→ The suppression of the revolt of 1857 had created a lot of bitterness between Muslims and the British.

→ Sir Syed Ahmed Khan started the Aligarh Movement for the spread of modern education and social reforms among Muslims.

→ Kandukuri Veeresalingam was a social reformer of the Andhra Region.

→ Savitribai Phule along with her husband Jyothiba Phule played an important role in improving women’s rights in Maharashtra.

→ Jyothiba Phule founded Satya Shodhak Samaj to build a new society based on truth and equality.

→ Narayana Guru was a religious leader who preached the idea of “One Jathi, One God and One Religion for all”.

→ Some of the reformers called Dalits of Andhra Pradesh ‘Adi Andhras’.

→ Gandhiji encouraged women to participate in the Non-Cooperation Movement and Satyagrahas.

→ Ambedkar founded an Independent Labour Party to represent the interests of the Dalits.

→ Reforms: A change in any pattern.

→ Sati: In some parts of the country, upper-caste women were burnt along with the bodies of their dead husbands. This was called ‘Sati’.

→ Purdah: There ¡s a system for women covering their faces with some clothes or sarees. This is known as the Purdah system.

→ Widow marriages: In the olden days the widows were suffered a lot in their families. So some reformists worked on this and introduced remarriages to them.

→ Untouchability: It was a sin in society. Some castes in the society were treated as lower castes. And the higher caste people wouldn’t touch them. These were called untouchability. 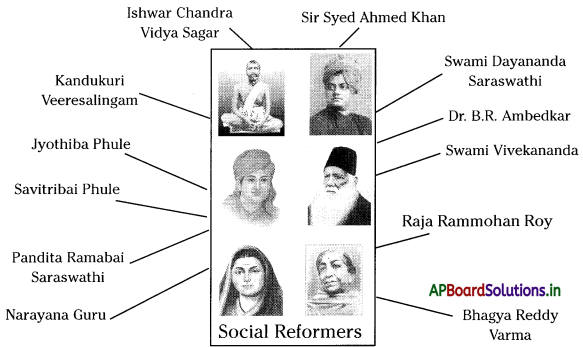