Students can go through AP State Board 9th Class Biology Notes Chapter 1 Cell its Structure and Functions to understand and remember the concept easily.

→ We can see the cell wall cytoplasm, nucleus, chloroplast and mitochondria with \ a compound microscope.

→ Under the electron microscope, a few other structures became visible.

→ Chloroplasts occur only in the ceils of green plant parts like the leaf and tender I stem.

→ The fundamental organizational unit of life is the cell.

→ Cells are enclosed by a plasma membrane composed of lipids and proteins.

→ A plasma membrane is a selectively permeable membrane.

→ The cell wall is a tough, flexible porous layer.

→ During growth and development, the cell wall continuously exchanges information with other cells.

→ The plant cells can withstand much greater changes in surroundings medium than animal cells.

→ In-plant cells, a cell wall composed of cellulose is located outside the cell membrane. % Nucleus was named by Robert Brown in 1831.

→ The nucleus is the most important organelle of the cell

→ Schleiden called it the cytoblast

→ The nucleus regulates and controls all the functions and determines the characteris¬tics of the organism.

→ It is the bearer of genetic information and is closely involved in cell division.

→ Eucaryotic cells have a nucleus except for Red blood cells, phloem sieve tubes in plants.

→ The nuclear membrane separates the nucleus from the cytoplasm.

→ On the basis of the presence of nuclear membrane, cells are categorized into two types, i.e., Prokaryotic and Eucaryotic cells.

→ The cytoplasm is the fluid content, contains cell organelles.

→ RER is the site of protein manufacture.

→ SER helps in the manufacture of fat molecules and lipids.

→ Camillo Golgi had observed Golgi body or Golgi apparatus in 1898.

→ It is made up of several membranes.

→ Its function is to package various substances.

→ The number of Golgi bodies is large in those cells that secrete hormones and enzymes.

→ They are small, spherical or cylindrical in shape and 150 times smaller than the nucleus.

→ It is made of a double-membrane wall

→ Plastids are of two types:

→ In Algae plastids are found as ladders, stars, spirals or reticulate.

→ Chloroplasts trap the energy of sunlight and transform it into chemical energy in photosynthesis.

→ The large empty spaces visible in the cells are vacuoles.

→ In mature plant cells, they might occupy almost the entire cell space.

→ All living beings are made of cells.

→ Rudolf Carl Virchow (1855) first explained that new cells can be formed from the preexisting cells.

→ All living organisms are composed of cells and products of cell

→ All cells arise from pre-existing cells.

→ Plasma membrane: The outermost layer of the cell that separates cytoplasm from the external environment.

→ Cell wall: It is an extra layer outside the cell membrane in plant cells.

→ Prokaryotic cell: Cell that does not have a nuclear membrane-bound nuclear material or cell without a distinct nucleus.

→ Chromo plants: These are the coloured plastids present ¡n only in plant cells.

→ Chlora plants: Chloroplasts are a type of plastids in green colour. They are of different shapes disc, oval, etc.

→ Leucoplasts: These are colourless plastids present only ¡n plant cells.

→ Cisternae: Enclosed spaces ¡n the cytoplasm of a cell, which gets separated from the ground substance by the cytoplasmic membrane.

→ Vesicles: Used for a cavity within the cytoplasm which is surrounded by a membrane.

→ Cristae: These are the folds of the inner membrane of mitochondria

→ Matrix: It is the space between cristae.

→ Unicellular: Organism made of a single cell.

→ Multicellular organism: Organism made up of many cells.

→ Cytoplasm: Used for the part of protoplasm excluding the nucleus.

→ Nucleus: It ¡s the control room of a cell having genetic information.

→ Mitochondria: Cell powerhouse and is a seat for cellular respiration.

→ Proteins: They are synthesized from amino acids and form one of the main constituents of protoplasm.

→ Cytoplasm: Schlelden called the nucleus a cytoplasm he thought that new cells were created from the nucleus.

→ Suicide bags: Lysosomes cause the destruction of cells hence they are called suicide bags.

→ Succulent plants: A xerophyte that stores water in the tissue giving it a fleshy appearance.

→ Unique: Being the only one of its kind.

→ Flexible: Able to change to new conditions or situations.

→ Hormone: An organic substance produced in small amounts at one site ¡n an organism and transported to another site where it acts.

→ Enzyme: An organic catalyst that catalyses a reaction within a cell. 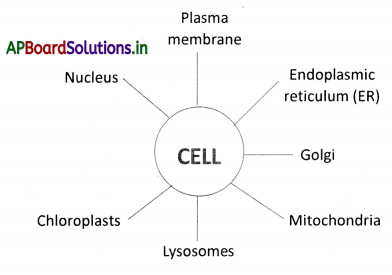 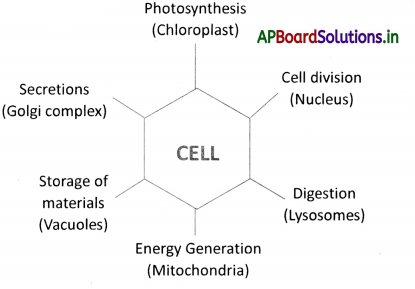 → Certain organelles are present in large numbers in the cell for example cells involved in photosynthesis may contain around 50 to 200 chloroplasts.

→ The Father of Cell Biology: