Students can go through AP State Board 8th Class Biology Notes Chapter 1 What is Science? to understand and remember the concept easily.

→ The word Science comes from the Latin word “Scientia”. It means knowledge.

→ Science is an organized study of knowledge that is based on experimentation.

→ Science is a tool for searching truths of nature.

→ Science is the way of exploring the world.

→ Questioning is the primary or fundamental step in scientific thinking.

→ Many scientists find their greatest joy in a previously unknown fact that explains something problem, previously not explained, or that overturns some previously accepted idea.

→ Scientists observe nature and its laws. Scientists follow a specific way for their innovations. The way they follow is called Scientific Method.

→ In the words of Karl Popper,” Science is a history of corrected mistakes”.

→ Primitive: Of early times, of long ago, original, first of kind.

→ Concerted: Planned or carried out by two or more people working together or with the same aim.

→ Phenomena: Facts, (or) circumstances that can be observed

→ Exploring: Searching (or) investigating, to make a careful investigation (or) study of something.

→ Territorial: To land and water owned or claimed by an entity especially a government.

→ Perspective: The art of picturing objects on a flat surface so as to give the appearance of distance or depth.

→ Investigation: Into something especially a detailed one that is undertaken officially (or) an examination (or) inquiry.

→ Hypothesis: A tentative explanation for a phenomenon used as a basis for further investigation.

→ Predict: To announce or tell before head, forecast, prophesy, foretell.

→ Variables: Apt to change, changeable, uncertain, that can be varied.

→ Vocabulary: A list of words usually in alphabetical order with their meaning (or) grammar, glossary (or) dictionary.

→ Narrative: A story or an account of a sequence of events in the order in which they happened, narration, account.

→ Informative: To communicate information or knowledge to somebody.

→ Interpreting: To establish or explain the meaning or significance of something.

→ Analysis: A detailed examination of the elements or structure of something. 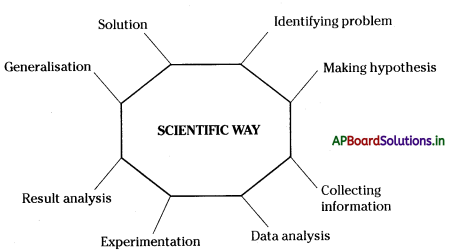 → There are over 1000 organisms living on our skin. In the chapter on microorganisms, you have already seen the pictures of some of them. The biotic community consists of bacteria, fungi, and small arthropods, etc. The abiotic factors are dead skin cells, water, salts, and oil of our sweat, air, etc.

→ Albert Einstein:
Albert Einstein was born in 1879 in Germany. He was famous for his Theory of Relativity. He proved that light travels in, the form of particles called “Photons”. In 1921 he was awarded Nobel Prize in Physics E = MC2 is his famous equation. He died in 1955.

→ Isaac Newton:
Sir Isaac Newton was born on 25 – 12 – 1642 in Lincolnshire. He was the discoverer of Laws of Gravitation. He worked as a professor of Mathematics at the age of 27 in Trinity College. He invented many things which are helpful to mankind. He died on 20 -3 -1727 in London.