→ The eye, nose, ear, tongue and skin are the five sensory organs in human beings.

→ Stimuli from the environment around are received by the body through sense organs.

→ All sense organs work together for a particular sensation.

→ The brain is the centre of all sensitive activities.

→ The brain receives information from sense organs through sensory nerves and after interpretation sends signals to the parts through motor nerves.

→ Aristotle and Plato mentioned the five senses of humans. Touch was the most important

→ Eyelids, eyelashes, eyebrows, lachrymal glands, eyeballs, conjunctiva are some of the parts of an eye.

→ The eye is covered by three layers called the sclerotic layer or sclera, choroid layer and retina.

→ The biconvex lens is present immediately behind the pupil

→ Lens divides the inner eyeball into an aqueous chamber and a vitreous chamber.

→ The retina contains rods for near dark vision while cones help in bright colour light, vision.

→ Blindspot is the area of no vision where the optic nerve leaves the eye.

→ Fovea or yellow spot is the area of best vision.

→ The eye forms an image in the retina.

→ The lens turns the image left to right and upside down.

→ In nearsightedness or Myopia images are formed in front of the retina.

→ In farsightedness or Hypermetropia, images are formed behind the retina.

→ Ms patterns are different for different individuals and can be used for identification.

→ The main diseases and defects of the eye are night blindness, xeropthalmia, myopia (near sightedness], Hypermetropia (farsightedness], glaucoma, cataract and colour blindness.

→ Ear helps in hearing and in maintaining the equilibrium of our body.

→ The tympanum or eardrum is present at the end of the ear canal or Auditory Meatus.

→ The chain of three bones malleus, incus and stapes are present in the middle ear which helps in amplifying sound

→ The internal ear consists of a bony labyrinth enclosing the membranous labyrinth.

→ Olfactory receptors or smell receptors are present in the mucus membrane of the nasal cavity.

→ 10 thousand taste buds are located in the walls of the papillae of the tongue.

→ Umami is one of the five basic tastes together with sweet, sour, bitter and salty.

→ On the tongue, a specialised nerve hotline carries nothing but taste messages to specialised regions of the brain.

→ The skin has cutaneous receptors for touch.

→ Skin is the largest organ of human beings contains the outer epidermis and the inner dermis.

→ Sweat glands, sebaceous glands, hair follicles, blood vessels and fats are present in the dermis of the skin.

→ Sense organs are the gateway of knowledge.

→ The visually impaired students can read the Braille script merely by touching.

→ Sensory receptors: Receptors present in sense organs that respond to a stimulus in the external or internal environment of an organism.

→ Lachrymal glands: Present in eye. They secrete lubricant for the eye aiding in the movement of the eye.

→ Stimulus: Something external that influences an activity.

→ Conjunctiva: It ¡s the layer that covers the front portion of the eye.

→ Sclera: One of the three layers that cover the eye. It is the outermost thick, tough, fibrous, non – elastic and white coloured layer.

→ Iris: It ¡s the part formed by the choroid layer around the pupil.

→ Pupil: The small black round area in the middle of the eye.

→ Choroid layer: It ¡s the second layer that covers the eye. It is black ¡n colour and contains a lot of blood vessels.

→ Pinna: External ear; visible part of the ear on either side of our head.

→ Auditory meatus: The canal in the ear.

→ Malleus: The first bone of the three bones present in the middle ear.

→ Incus: The second bone of the three bones present in the middle ear.

→ Stapes: The last one of the three bones present in the middle ear. All these three bones amplify vibrations received on the tympanum membrane.

→ Tympanum: Also called the eardrum. A thin layer is present at the end of the auditory meatus.

→ Vestibule: It is the first part of the membranous labyrinth present in the internal ear.

→ SnlIunar canals: It is the second part of the membranous labyrinth present in the internal ear connected with the vestibule and filled with endolymph.

→ Cochlea: It ¡s the third part of the membranous labyrinth. It is spiral-shaped.

→ Auditory nerve: It is formed by the union of vestibular and cochlear nenes.

→ Vitreous chamber: It is the part of the inner ball divided by a lens. It is filled with jelly-like fluid.

→ Aqueous chamber: It is another part of the inner ball divided by a lens. It is filled with water like fluid.

→ Vitreous chamber: It is the part of the inner ball divided by a lens. It is filled with jelly-like fluid.

→ Aqueous chamber: It is another part of the inner ball divided by a lens. It is filled with water like fluid.

→ Retina: Image formation site in eye. It contains cells called rods and cones. Yellow spots and blind spots are present in it.

→ Blindspot: The area of no vision In Retina

→ Fovea or Macula or yellow spot: The area of the best vision in the Retina.

→ Optic nerve: It ¡s formed by the nerve cells bundled together. It transports visual information from the eye to the brain.

→ Night blindness: Type of eye disease. The person cannot see the objects in dim light and in the night.

→ Myopia: Also called nearsightedness. Images are formed in front of the retina. Type of eye disease. Can’t see objects at a distance.

→ Cataract: Type of eye disease. A thin layer is formed over the conjunctiva. The lens becomes white instead of clear.

→ Colour blindness: Type of eye disease. Unable to see the difference between all or some colours.

→ Chemoreceptors: These are specialised nerve cells designed to respond to chemical stimuli.

→ Foliate papillae: These are the bump-like structures present on the sides of the tongue.

→ Filiform papillae: Small prominences or Flakes on the tongue. They are thin, ‘V’ shaped but do not contain taste buds. Numerous in number not involved in gestation. Mechanical in function.

→ Vallarta papillae: These are dome-shaped structures on the tongue. Their number varies from eight to twelve. They get afferent taste nerves from the cranial nerve, glass pharyngeal.

→ Fungiform papillae: The roundish structures on the tongue.

→ Melanin: It Is a pigment, responsible for the colouration of the skin.

→ Cutaneous receptors: Receptors present in the skin for touch.

→ Tactile receptors: Separate Receptors for touch in the skin.

→ Nociceptors: Receptors for temperature in the skin.

→ Leucoderma: Disease due to the deficiency of melanin.

→ Pella gro: Disease due to the deficiency of Vitamins.

→ Umami: It is the savoury flavour found in protein-rich foods such as meat, seafood and cheese. It is one of the five basic tastes together with sweet, sour, bitter and salty. 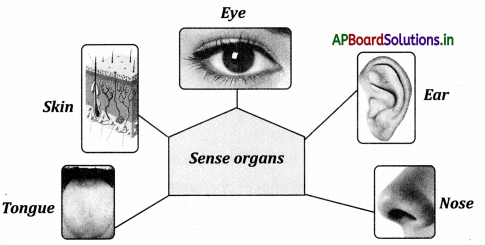 → While issuing identity cards like AADHAR. They take photographs of your eyes. Do you know why did they take a photo of your eye? Iris patterns are individual specific and can be used for identification just as our fingerprints.

→Each taste bud has a cavity with a pore. The pore is called the taste pore. The epithelial cells, surrounding the taste buds form taste cells or the receptors. The receptor cells and the cells supporting them are situated in the cavity. Each receptor cell connects to a nerve fibre. All the nerve fibres connect to the main nerves that carry messages to the brain and spinal cord for further processing.