Observe Figure I and II. Find the area of both. Are the areas equal?
Trace these figures on a sheet of paper, cut them. Cover fig. 1 with fig. II. Do they cover each other completely? Are they congruent?
Observe fig. Ill and IV. Find the areas of both. What do you notice?
Are they congruent?
Now, trace these figures on sheet of paper. Cut them let us cover fig. Ill by fig. IV by coinciding their bases (length of same side).
As shown in figure V are they covered completely?
We conclude that Figures I and II are congruent and equal in area. But figures III and IV are equal in area but they are not congruent 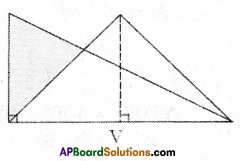 Question
Which of the following figures lie on the same base and between the same parallels? In such cases, write the common base and two parallels. [Page No. 249]

Question
Take a graph sheet and draw two par-allelograms ABCD and PQCD on it as show in the Figure, [Page No. 250] 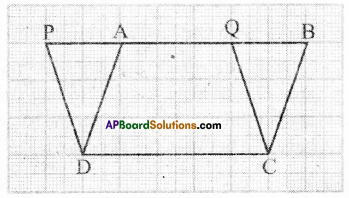 The parallelograms are on the same base DC and between the same parallels PB and DC. Clearly the part DCQA is common between the two parallelo-grams. So if we can show that ΔDAP and ΔCBQ have the same area then we can say ar(PQCD) = ar(ABCD)

Draw two triangles ABC and DBC on the same base and between the same parallels as shown in the figure with P as the point of intersection of AC and BD. Draw CE//BA and BF//CD such that E and F lie on line AD.
Can you show ar(ΔPAB) = ar(ΔPDQ) ?[Page No. 254] 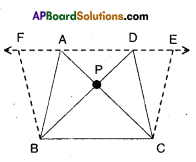