Students can go through AP State Board 9th Class Physical Science Notes Chapter 5 What is inside the Atom? to understand and remember the concept easily.

AP State Board Syllabus 9th Class Physical Science Notes Chapter 5 What is inside the Atom?

→ The matter is made up of atoms.

→ According to Dalton, the atom is indivisible. Later experiments proved that an atom is divisible.

→ Some small particles which are smaller than atoms are present inside the atom, called subatomic particles.

→ Thomson discovered electrons. These are the negatively charged particles whose mass is negligible.

→ Protons are positively charged particles whose mass is 2000 times that of electrons.

→ Chadwick discovered neutrons, which have no charge and mass nearly equal to that of protons.

→ Thomson developed a model of the atom that shows electrons embedded throughout the mass of positively charged material.

→ Rutherford’s alpha-particle scattering experiment led to the discovery of the atomic nucleus.

→ Rutherford’s model of the atom has a large empty space with a small dense, positively charged nucleus in the center.

→ According to Rutherford, electrons are revolving around the nucleus.

→ Rutherford’s model of the atom could not justify the stability of the atom.

→ Neils Bohr modified Rutherford’s model of the atom by stating that electrons move in specific energy levels around the nucleus.

→ Neils Bohr’s model of atoms could not predict the spectra of heavier atoms.

→ Bohr – Bury proposed some rules for the distribution of electrons in various shells.

→ A maximum number of electrons present in a shell is given by the formula 2n2, where ‘n’ is the shell number.

→ The number of electrons present in the outermost orbit of an atom is called its valency.

→ An outermost shell that has 8 electrons is said to possess an octet.

→ An atom with 8 electrons or an octet in its outermost shell is chemically stable.

→ The atomic number is the number of protons in the nucleus of an atom, denoted by ‘Z’.

→ The atoms of the same element which have the same number of protons but have different numbers of neutrons are called isotopes.

→ Some isotopes are used for solving chemical and medical mysteries.

→ Atom: An atom is the smallest particle of an element that can participate in a chemical reaction and retain all its properties.

→ Proton: Proton is a positively charged sub-atomic particle that is part of every atomic nucleus. The mass of a proton is 2000 times that of the electron.

→ Neutron: A neutron is an uncharged particle that is part of almost every nucleus. The mass of the neutron is nearly equal to the mass of a proton.

→ Nucleus: All the positively charged material in an atom formed a small dense center, called the nucleus of the atom. The nucleus consists of protons and neutrons.

→ Atomic mass: The mass of an atom of a chemical element expressed in atomic mass units. It is approximately equivalent to the number of protons and neutrons in the atom (the mass number) or to the average number allowing for the relative abundances of different isotopes.

→ Formula unit mass: The formula mass of a molecule is the sum of the atomic weights of the atoms in the empirical formula of the compound.

→ Valency: The number of electrons present in the outermost orbit of an atom is called its valency. (OR) The combining capacity of one atom with another atom is known as its valency.

→ Isotopes: Isotopes are atoms that have the same number of protons but a different number of neutrons.

→ Stable atom: An atom with 8 electrons or an octet in its outermost shell is chemically stable and does not combine with other atoms.

→ Octet: An outermost shell that has 8 electrons is said to possess an octet. 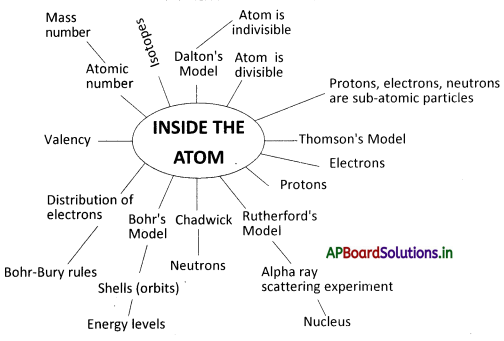