Students can go through AP State Board 10th Class Biology Notes Chapter 5 Coordination to understand and remember the concept easily.

→ Living organisms respond and react to their environment.

→ All our functions are carried out by an effort of several systems working together.

→ The nervous system and endocrine system are the two systems that control and coordinate various functions in the body.

→ The responses of the nervous system can be classified as a reflex, voluntary and involuntary actions.

→ Responses are brought about by rapid changes in some muscles.

→ Galen concluded that nerves are of two kinds

→ The neuron is the structural and functional unit of the nervous system.

→ Each nerve cell consists of a cell body, dendrites, and axon.

→ Synapse is the functional region of contact between two neurons.

→ Basing on the pathways followed nerves are classified mainly into three different types.

→ Afferent or sensory nerves carry information from the sense organs to the central nervous system.

→ Efferent or motor nerves carry messages from the central nervous system to parts that or the effector organs.

→ Responses on which we may not have control are called reflexes.

→ The existence of the knee jerk was first noted in 1875.

→ The pathway of reflex action is called a reflex arc.

→ The central nervous system includes the brain and spinal cord.

→ The brain is the highest coordinating center in the body.

→ The brain is protected by the cranium.

→ The brain is covered by three membranes called meninges.

→ The space between the membrane is filled with cerebrospinal fluid.

→ The brain has three divisions:

→ The forebrain consists of the cerebrum, diencephalon.

→ The spinal cord is a cylindrical structure enclosed within the vertebral column.

→ There are 12 pairs of cranial nerves that arise from the brain and 31 pairs of spinal nerves.

→ The peripheral nervous system is the network of spinal and cranial nerves that are linked to the brain and spinal cord.

→ Many activities of the internal organs like the heart, blood vessels, and glands are controlled by the autonomous nervous system.

→ Neurons present in our digestive tract is named as small brain and the system is called the enteric nervous system.

→ ‘sugar diabetes is a condition in which the amount of free sugar in the blood and urine is called of the pancreas.

→ The chemical substances produced by endocrine glands are known as hormones.

→ The feedback mechanism regulates the timing and amount of hormones released.

→ Plant hormones or growth substances coordinate the activities of the plant.

→ Auxins are responsible for cell elongation and differentiation of shoots and roots.

→ Gibberellins help in the germination of seeds and sprouting of buds; elongation of stems and breaking the dormancy in seeds and buds.

→ Abscisic acid helps in the closing stomata and seed dormancy.

→ Cytokinins promote cell division; the promotion of sprouting of lateral buds, delay the aging in leaves, the opening of stomata.

→ Ethylene is useful in ripening fruit.

→ The bending of plants towards light is phototropism.

→ The downward movement of a plant in response to gravitational force is called geotropism.

→ The movement due to chemical stimulus is seen during the pollen tube growth is called chemotropism.

→ Response: Reaction, a reaction to something.

→ Neuron: The structural and functional unit of the nervous system.

→ Schwann cell: A cell that forms spiral layers around a myelinated nerve fiber between two nodes of Ranvier and forms the myelin sheath consisting of the Inner spiral layers from which the protoplasm has been squeezed out.

→ Axon: The long projection from the cell body that extends to different parts of our body. The axon is to transmits information to different neurons, muscles, and glands.

→ Synapse: It ¡s the functional Junction between the two neurons through which information is transmitted or relayed to another neuron.

→ Afferent or Sensory nerves: Carry information from the receptor to the association neurons in the spinal cord.

→ Efferent or motor nerves: Carry information from the spinal cord or brain to the effector organs.

→ Central nervous system: It includes the brain and spinal cord. It coordinates all neural functions.

→ Brain: An organ of soft nervous tissue contained in the skull of vertebrates. It coordinates the center of sensation and intellectual and nervous activity.

→ Spinal cord: Part of the central nervous system that acts as a relay station. It plays a major role in reflex actions.

→ Cerebrospinal fluid: Fluid present between the inner and middle layers. Protects the brain from mechanical shocks.

→ Insulin: It Is the hormone produced by islets of Langerhans of the pancreas. It regulates sugar levels in the blood. Its deficiency results in diabetes mellitus.

→ Endocrine glands: These are also known as ductless glands. Their secretion is directly released into the blood (Hormone). They bring about chemical coordination in living organisms. e.g.: Pituitary, Thyroid, Parathyroid, Pancreas, and Adrenal gland.

→ Hormones: The secretion of endocrine glands is a hormone. Chemical coordination is brought out by hormones.

→ Feedback mechanism: It helps the organism to maintain homeostasis or dynamic equilibrium. Homeostasis is the maintenance of a stable internal state within an organism. It regulates the action of hormones.

→ Tropic movements: When the fixed part of a stationary plant moves in response to a stimulus the reaction is known as a tropic movement.

→ PhototropIsm: Bending of the plant towards the light is called phototropism.

→ Reflex arc: The path followed by a nerve impulse starting from the receptor and finally reaching the effector is called reflex arc; a Structural and functional unit that carries reflex action.

→ Vasomotor: It refers to actions upon a blood vessel that alters its diameter.

→ Goosebumps: A roughness of the skin produced by the erection of its papillae especially from cold, fear, or a sudden feeling of excitement.

→ Stumps: The bottom part of a tree left projecting from the ground after most of the trunk has fallen or been cut down.

→ Hydrotropism: Roots of a plant growing towards the water in the soil.

→ Thigmotroplsm: Tendrils of a plant growing towards support and wind around them.

→ Voluntary actIon: It occurs without the conscious choice of an organism. If it occurs specifically in response to a stimulus, it will be known as a reflex.

→ Involuntary actIon: It occurs because of choice. It may or may not occur with the awareness of the organism performing it.

→ Lumbar region: It refers to the lower back, where the spine curves inwards towards the abdomen. 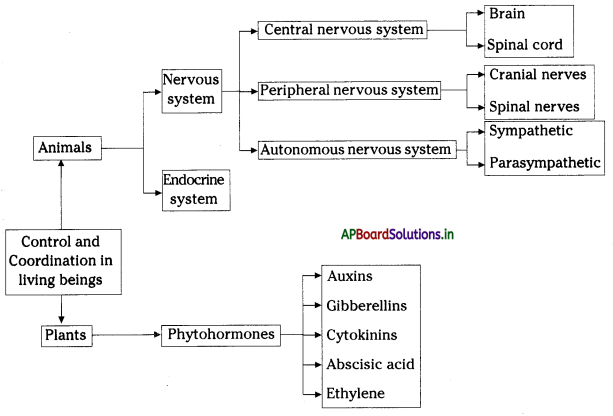