→ From the ancient period till about 400 CE, Europe was dominated by the Roman Empire. The Romans carried out trade with distant countries like India.

→ They also influenced our art to a large extent, especially in northwest India.

→ Christianity, which had emerged during the first century-around 100 CE, had become the dominant religion in Europe replacing the older religions followed in the Roman Empire.

→ Feudalism grew stronger in Europe, the great cultural achievements of the ancient period were slowly forgotten and lost.

→ In Arabia, Persia, Iraq, and Northern Africa, the new religion of Islam were spreading and new political powers had emerged.

→ Turkish rule had been established in northern India around the beginning of the thirteenth century.

→ The Arabs established their empire in a region which was an intersection of several great cultures like China, India, Iran, Africa, and Europe.

→ There was a great revolt of peasants in England in 1381 which ended serfdom in England. Among the European countries, Italy was the first to benefit from urbanization and trade. Petrarch is considered one of the early Humanists of Italy.

→ During the middle ages, the culture of people came to be dominated by the Roman Catholic Church. In 1453, Constantinople was overthrown, Ottoman Empire took the place of the Eastern Roman Empire. Many of the educated men who spoke Greek fled to Italy for safety. They brought their books and ancient Greek literature was revived. This was called renais¬sance or rebirth.

→ Humanism started in Italy and soon spread to France, England, and the Netherlands.

→ Artists observed nature, the people, and places around them and sought to represent them as they were. Anatomy, Geometry, Physics, as well as a strong sense of what was beautiful, gave a new quality to Italian art, which was to be called “Realism” and which continued till the nineteenth century.

→ In Architecture, people studied the old Roman buildings to revive the old Roman style. Artists were known individually by name, not as members of a group as earlier. Michelangelo – immortalized by the ceiling he painted for the Pope in the Sistine Chapel, the sculpture called “The Pieta “and his design of the dome of St. Peter’s Church, all in Rome. Printing of the Bible led to the Reformation movement which questioned the corruption of the priesthood and laid foundations for the Protestant churches.

→ People started investigating the world in which they lived. Scientists like Bacon, Copernicus, Galileo, Harvey, Vesalius contributed a lot to the development of modern science. During the Renaissance, Europeans extended their limited knowledge of geography. The compass was invented. Constantinople was overthrown. Trade with Eastern countries was closed. So sailors like Bartholomew Diaz, Vasco-da-Gama, Columbus, Magellan discovered sea routes. These voyages were landmarks in human history.

→ Culture has been changing constantly in all ages. Even today, we can observe rapid changes in our cultural life.

→ During the medieval period, three great empires-Ottomans in Turkey, the Safavids in Iran, and the Mughals in India had emerged before 1550.

→ When Renaissance, Humanism, and Reformation were sweeping across Europe, in India styles of painting were refined as Mughal miniature painting and wall paintings of Vijaya Nagara.

→ Feudalism: It is a social system under which the political power was with large warrior-landlords who controlled the villages and peasants.

→ Serfs: Serfs were a class of people (during the Medieval period) who had to work on the land of the landlord, work in their workshops and also fight for them in wars.

→ Renaissance: Renaissance means “rebirth”. It was a period in Europe, especially Italy when there was a new interest in art, literature, science, and learning flourished.

→ Humanism: Humanism is the belief that people can achieve happiness and live well without religion.

→ Realism: Realism is a situation or the belief in which people recognize and accept the true nature of the situation.

→ Reformation: The reformation is the movement to reform the Catholic Church in the sixteenth century, which led to the Protestant Church is set up.

→ Protestant: A Protestant is a Christian who was separated from Roman Catholic Church in the sixteenth century.

→ Culture: It relates to aspects of human activity such as literature; music; dance; painting; sculpture; architecture; religious beliefs and even science.

→ “Art” is embedded in nature; he who can extract it has it… The more closely your work abides by life in its form, so much the better will it appear… No man shall ever be able to make a beautiful figure out of his own imagination unless he has well stored his mind by much copying from life.’ – Albrecht Durer (1471 – 1528)

→ This sketch by Durer (Praying Hands) gives us a sense of Italian culture in the six¬teenth century, when people were deeply religious, but also had a sense of confidence in man’s ability to achieve near-perfection and to unravel the mysteries of the world and the universe.

→ Leonardo da Vinci (1452-1519) had an amazing range of interests from botany and anatomy to mathematics and art. He painted the Mona Lisa (on left) and The Last Supper. One of his dreams was to be able to fly. He spent years observing birds in flight and designed a flying machine. He signed his name as ‘Leonardo da Vinci, a disciple of experiment’. 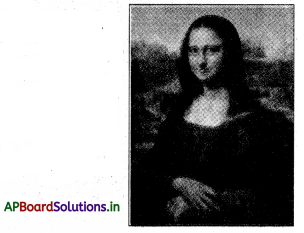