→ India with its vast population and unique geophysical characteristics is one of the world’s most “Disaster-prone” countries.

→ The East and South-East parts of India are frequently affected by cyclones.

→ The damage caused due to a hazard increases when people are not adequately prepared to face the disaster.

→ Disasters can be categorized into various types based on speed and origin/cause.

→ The term ‘Tsunami’ has been coined from Japanese words – ‘Tsu’ and ‘name’.

→ Coastal tidal gauges can stop tsunamis close to the shore, but they are useless in deep oceans.

→ Drought is basically a disaster situation caused by a lack of rainfall.

→ Excess or deficient rainfall is determined by the percent variation from the average rainfall of 70-100 years.

→ Certain regions due to their geographical location are more likely to receive less rainfall. These are called ‘drought-prone areas’.

→ Unlike sudden disasters drought being a slow-onset disaster, gives us ample time for preparedness, response, and mitigation.

→ In urban areas, all rainwater as it falls over roofs of houses should be harvested.

→ Famine: A disaster situation caused by lack of rains.

→ Pest Infection: Sometimes there may be attacks of pests on fields and the fluids get infected. This is called pest infection.

→ Environmental Degradation: Deterioration of the environment through depletion of resources such as air, water, and soil, the destruction of the ecosystem.

→ Drought: Drought ¡s basically a disaster situation caused by a lack of rainfall. 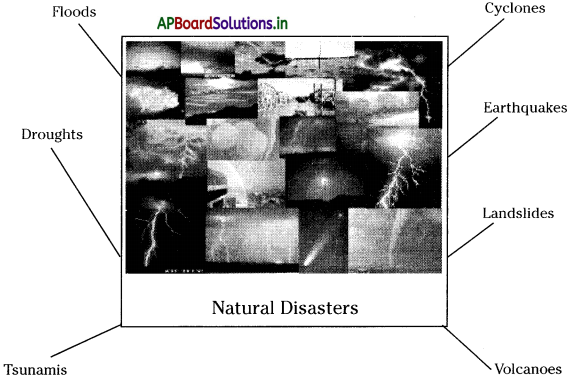