Students can go through AP State Board 9th Class Social Studies Notes Chapter 19 Expansion of Democracy to understand and remember the concept easily.

→ Libya was a poor country. It was colonized by Italy and became free in 1951.

→ Later power was transferred to King Idris. In 1959 vast resources of petroleum were found in Libya.

→ The king and a few powerful families cornered most of this (sale of oil) new wealth.

→ In the year 1969, Gaddafi and a group of 70 young army officers took over the control of Libya.

→ Monarchy was abolished. “Socialist Libyan Arab Republic” was established under the leadership of “Revolutionary Command Council.”

→ Libya developed in all aspects.

→ Though it was a republic everything was controlled by Gaddafi and the RCC.

→ People revolted; UNO gave support; USA, USSR, and Britain extended their help, and finally, Gaddafi regime was overthrown and a new democratic government was sworn in on 14th Nov. 2012.

→ Myanmar got independence from British rule.

→ Aung San, a leader of the Burman ethnic group was assassinated.

→ The army generals have been ruling the country since then.

→ Unlike Libya, Burma did not see any development and became an impoverished country.

→ Nation League for Democracy (NLD) led by “Suu Kyi” won a majority (80%) of the seats though she was in prison.

→ There was also international pressure created through sanctions.

→ An election was held in 2010. Suu Kyi was banned from contesting the 2010 election and was released from her house arrest only after the elections.

→ In 2011 Suu Kyi’s National League of Democracy contested and have won 43 out of 45 parliamentary seats that were vacant. This is considered the beginning of democracy in Burma.

→ In the 20th century, democracy became the slogan of anti-colonial struggles in Asia.

→ Some of the countries were able to attain independence but many of them could not build stable democracies, e.g.: Libya, Burma, and Myanmar.

→ In some countries, communism gained popularity and was broken also. Example – USSR which was disintegrated and CIS formed.

→ Thus we can conclude that a democracy that respects the freedom and rights of all people may be the best way to solve the complete problems the countries face today.

→ Nomadic animal herders: People who wander from place to place in search of livelihood along with animals like, sheep, goats, etc.

→ Urbanization: 1) Migration of people from villages to cities.
2) Increase in the number of cities.

→ Political corruption: Making money through illegal ways or cheating others by the political leaders.

→ House arrest: Basing on the judicial judgment if a person is forbidden or prohibited to come out of his house and no other person is allowed to meet him, can be termed as house arrest.

→ Dictatorship: If sovereignty vests in the hands of one single person, it is called “Dictatorship”.

→ Monarchy: It is a political system ¡n which a king or a queen, instead of an elected person rules the country.

→ Feudalism: It is a social system under which the political power was with large warrior landlords who controlled the villages and peasants. 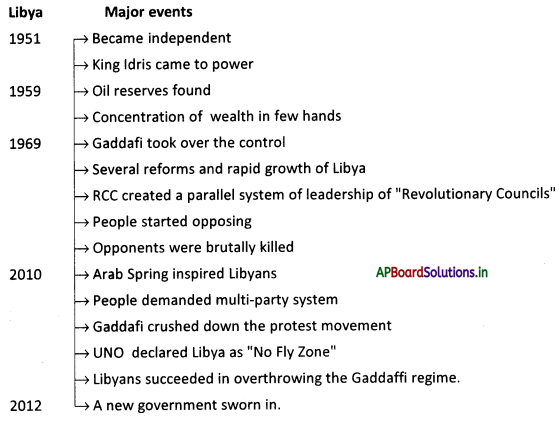 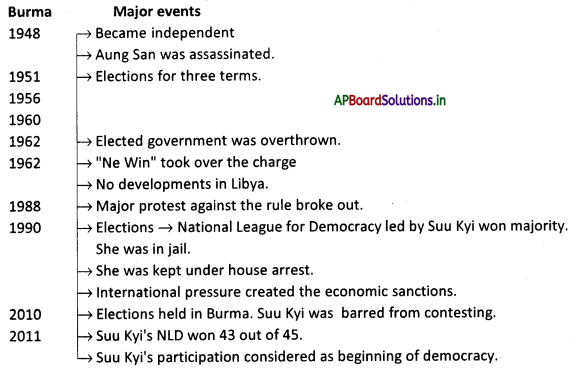 → Nobel Prize Acceptance
Suu Kyi was awarded Nobel Prize for Peace in 1991, while still under house arrest. It was her son who delivered the speech. Let us read an extract from the speech:

“… she would begin by saying that she accepts the Nobel Prize for Peace not in her own name but in the name of all the people of Burma.
Theirs is the prize and theirs will be the eventual victory in Burma’s long struggle for peace, freedom, and democracy.

… I personally believe that by her own dedication and personal sacrifice she has come to be a worthy symbol through whom the plight of all the people of Burma may be recognized. The plight of those in the countryside and towns, living in poverty and destitution, those in prison, battered and tortured; the plight of the young people, the hope of Burma, dying of malaria in the jungles to which they have fled; that of the Buddhist monks, beaten and dishonored.”

…. Aung San Suu Kyi says, “The quest for democracy in Burma is the struggle of people to live whole, meaningful lives as free and equal members of the world community. It is part of the unceasing human endeavor to prove that the spirit of man can transcend the flaws of his nature.”