Students can go through AP State Board 9th Class Social Studies Notes Chapter 2 The Natural Realms of the Earth to understand and remember the concept easily.

→ There are four natural realms of the Earth.
They are (a) Lithosphere,
(b) Hydrosphere,
(c) Atmosphere, and
(d) Biosphere.

→ The solid crust or the hard top part of the earth which is made up of rocks and minerals and covered with a thick layer of soil is called the lithosphere.

→ The realm of water which comprises various sources of water and different types of water bodies is called the hydrosphere.

→ The thin layer of air that surrounds the earth is the atmosphere.

→ The realm of life including bacteria is called the biosphere.

→ The primary divisions of the earth’s crust are oceans and continents. These are called first-order landforms.

→ The landforms like mountains, plains, and plateau are called second-order landforms.

→ All the continents and even the oceans are actually situated on a massive base of rocks called ‘plates’.

→ The plates are constantly being pushed very slowly. This movement of plates is called plate tectonics. This process causes earthquakes, etc.

→ Mid-ocean ridges or ranges are formed by lava rising up from the mantle and these create a new ocean floor.

→ The plates move and push. The incoming plate dips under the stable plate.

→ The Himalayas mountains were formed by the process of Indian plate pushing into the Eurasian plate.

→ Many of the plate boundaries are characterized by volcanic eruptions and earthquakes.

→ The lava that pours out on the surface from volcanoes and fissures form the extrusive landforms. This occurred many times on the Deccan and led to the formation of the Deccan plateau.

→ The constructive and destructive forces of water and air give rise to the great diversity of landforms.

→ Processes like weathering, erosion, transportation, and deposition are largely responsible for the formation of carved mountains, valleys, deltas, and sand dunes, etc.

→ As it descends the steep slopes the river flows swiftly exerting a great force, cuts the mountains vertically, and forms V-shaped valleys.

→ The swift flow and force of the river lead to the formation of gorges and canyons.

→ When the river is in flood it cuts the soil and when it is not in flood it deposits silt This is how the Ganga plain or Krishna, Godavari plains were made.

→ Glaciers through their processes of plucking and abrasion create U-shaped valleys.

→ The erosion and deposition of sea waves give rise to coastal landforms such as ‘sea arches, stacks, capes, and bays.’

→ The wind is the dominant agent in hot deserts. In deserts, the wind action creates a number of erosional and depositional features such as sand dunes, mushroom rock, Inselberg.

→ Loess is the fine dust bloom beyond the desert limit and is deposited on the neighboring lands.

→ The plains formed by the deposition of loess are called Loess Plains.

→ Igneous rocks: The hard rocks formed after the cooling of the molten material from volcanoes.

→ Sedimentary rocks: The debris is transported by rivers to the sea, where layer after layer is accumulated in the bottom and over time get transformed into sedimentary rocks.

→ ‘U’ shaped valley: The valley formed through the processes of plucking and abrasion by glaciers is called U shaped valley.

→ Lithosphere: The solid crust or the hard top part of the Earth.

→ Hydrosphere: The realm of water that comprises various sources of water and different types of water bodies like rivers, lakes, seas, and oceans, etc.

→ Atmosphere: The thin layer of air that surrounds the earth is the Atmosphere.

→ Biosphere: The realm of life including bacteria.

→ First-order landforms: The primary division of the earth’s crust into oceans and continents.

→ Seafloor spreading: The mid-ocean ridges or ranges formed by lava rise up from the mantle. This fresh crust slowly pushes the plate away which is called seafloor spreading.

→ Third-order Landforms: The shaping of the landforms such as valleys, deltas, sand dunes, etc. by wind and water are called third-order landforms.

→ Weathering: The process by which the rocks are weakened and broken is called ‘weathering’.

→ Erosion: The active wearing away of the earth’s surface by the moving agents such as water and wind is called erosion.

→ Gorge: A narrow valley with very steep slopes that are cut of hard rocks by the rivers is called a Gorge.

→ Canyon: A narrow chasm with steep, cliff walls cut into the earth by running water.

→ Meanders: Gentle turns like a snake made by the river in its flood plain are called meanders.

→ Glacier: Slow-moving of mass of ice is called Glacier.

→ Canyon: A narrow chasm with steep, cliff walls cut into the earth by running water.

→ Meanders: Gentle turns like a snake made by the river in its flood plain are called meanders.

→ Glacier: Slow-moving of mass of ice is called Glacier.

→ Plucking: Lifting pieces of rock and transporting them by glaciers is called plucking.

→ Sand Dunes: The unstable hills of sand formed due to weathering and persistent wind action are called sand dunes.

→ Inselberg: The isolated residual hills rising abruptly from the ground are called inselberg or Island Mountain.

→ Loess: The fertile deposits of fine dust beyond the desert limit is called Loess. 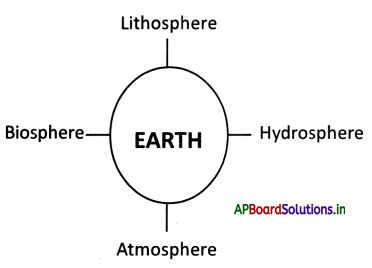 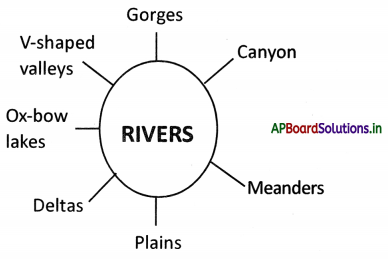 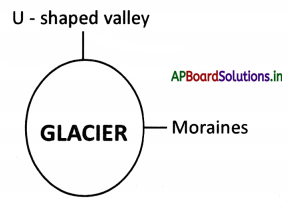 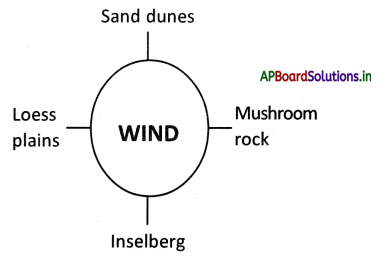 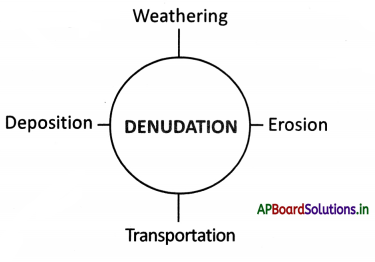 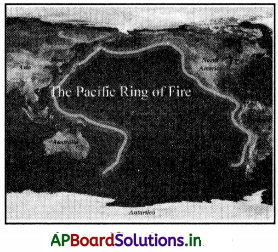 The Pacific Ring of Fire

→ The largest delta in the world is Sunderbans. It is formed at the mouths of rivers Ganga and Brahmaputra. The rivers Krishna and Godavari together make two large deltas in Andhra Pradesh.

→ Mushroom Rock: Winds erode the lower section of the rocks more than the upper part. Therefore such rocks have narrower bottoms and wider tops. They look like mushrooms. So it is called mushroom rocks.

→ Inselberg: The isolated residual hills rising abruptly from the ground are called inselberg or Island Mountain. They are characterized by their very steep slopes and rather rounded tops.