Students can go through AP State Board 8th Class Physical Science Notes Chapter 10 Reflection of Light at Plane Surfaces to understand and remember the concept easily.

→ If In the reflection of the light angle of the incident (i), angle of reflection (r) are always equal.

→ Incident ray reflected ray and normal lie in the same plane. This plane is called the plane of reflection.

→ The image formed by the plane mirror is virtually erect and the same size as the object.

→ The object distance and image distance are the same in the case of the plane mirrors.

→ In the plane mirror, the image is laterally inverted.

→ Reflection: The bouncing back of the light is called reflection.

→ Incident ray: The ray which is incident on a surface is catted incident ray

→Normal: The line perpendicular tå the surface is catted normal

→ The angle of incidence: The angÍe between the incident ray and normal is called angle (∠i) of incidence

→ Lateral inversion: The image of an object reverses its direction on reflection is a lateral inversion (This means that objects that are on the right side, appear on the left side in the mirror.)

→ Real image: The image formed due to the converging of light rays is real.

→ Plane mirror: A plane mirror is that which has a planar reflective surface.

→ Ray diagram: A diagram showing the paths of selected rays through an optical system. 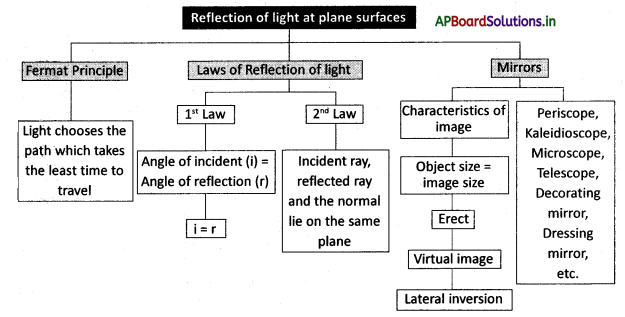