Question 1.
How do you appreciate the Cavours role in unification of Italy? (SA-II : 2017-18)
Answer:
Cavour’s work in the Unification of Italy is appreciable.
He unify the regions of Italy through a tactful diplomatic alliance with France and he worked neither a revolutionary nor a democrat.

Question 2.
Who formed ‘Young Italy’? Why? (SA-I : 2019-20)
Answer:
Young Italy was formed by Joseph Mazzini.
The main reason is to unified Italy and would touch off a European wide revolutionary movement. 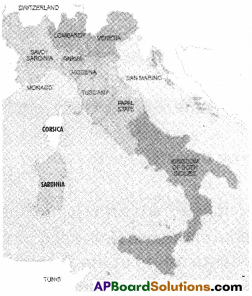 Question 2.
What were the political, social, and economic ideas supported by the liberals in France in the beginning of 19th century? (SA-I : 2018-19)
Answer:
Political, social, and economic ideas supported by liberals.
→ Freedom for the individual.
→ Equality of all before the law.
→ Concept of government by consent.
→ End of autocracy and privileges of the church.
→ Constitution and representative government through parliament.
→ Inviolability of private property.

ii) With what 3 countries did Bismarck go to war to achieve German unification?
Answer:
Denmark, Austria, and France.

Question 1.
The French women fought for which rights ? in the context of India, were the women given all these rights? Write your analysis. (SA-I : 2018-19)
Answer:
French women fought for Right to vote, Right ot contest to Legislature, and Right to capture political power.
Then in the context of India all Indian women who are eligible, get all the above rights. Even though in the issue of gaining above the rights some negligence is there in India.

Question 2.
Describe the process of Italian Unification in 19th Century. (SA-II : 2018-19)
Answer:
Unification of Italy :
I Stage :
In 1830s Guiseppe Mazzini had sought to put together a coherent programme for a Unitary Italian Republic.
He had also formed a secret society called Young Italy for the dissemination of his goals.

Question 2.
How did nationalism and the idea of the nation-state emerge?
Answer:

All these ideals led to the formation of the nation-states.

Question 3.
Discuss the importance of language and popular traditions in the creation of national identity.
Answer:

Question 4.
In what ways do you think could the French revolutionaries help the other people of Europe to become nations?
Answer:

Question 5.
Do you think the anti-Nizam movement was a nationalist movement like French revolution? Compare the similarities and differences between the two movements.
Answer:

Question 6.
Why do you think liberal democracy was reluctant to give right to vote to women and propertyless men?
Answer:

Question 8.
Why do you think were defeated by the conservatives?
Answer:

Question 9.
Read the following passage and answer the questions given below.

3) Who was the dictator that ruled over France during early 19th century?
Answer:
Napoleon.

4) When were the revolutions occurred in France in the early 19th century?
Answer:
In 1830 and 1848, the France experienced revolutions.

Question 10.
Read the following passage and answer the questions given below.

3) What were the Italian speaking provinces of the Habsburg Empire?
Answer:
Lombardy and Venetia were Italian provinces.

Question 11.
Why do you think conservatism needs to curb freedom to express one’s opinion and criticise?
Answer:

Question 12.
Read the following information and answer the questions given below.

Question 13.
Do you think our country has a liberal democratic political system? Give your reasons.
Answer:

Hence we can say India has liberal democratic political system.

Question 14.
Point out the following on the Europe map. 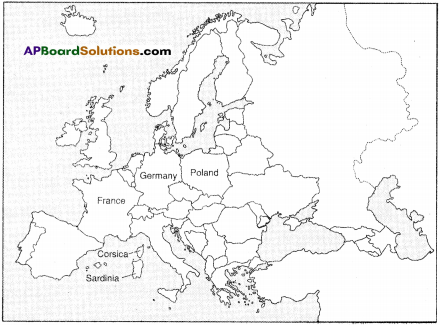 Question 15.
Locate the following on the Europe map. 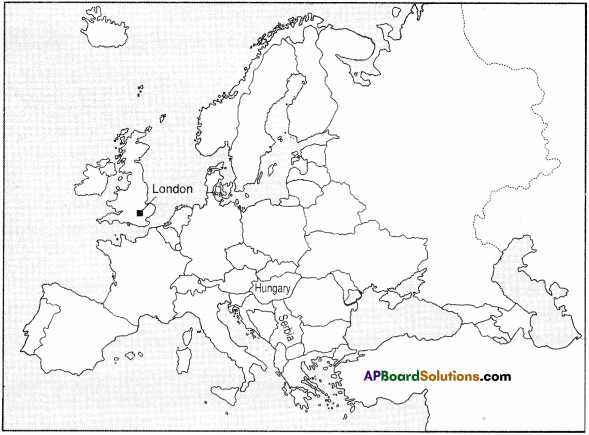 Question 16.
What is the caricature? What does it represent?
Answer: