Question 4.
Why is it difficult to study the formation of the earth and its structure?
Answer:
Earth formed around 4.54 billion years ago by accretion from the solar nebula. Nearly all branches of natural science have contributed to the understanding of the main events of the earth’s past. The age of the earth is approximately one-third of the age of the universe. Biological and geographical change has been constantly occurring on our planet since the time of its formation. The process of plate tectonics has played a major role in the shaping of earth’s oceans and continents as well as the life on it.

It took us years of scientific investigation and analysis of data to form an understanding of the interiors of the earth. The main reason for this is that even the deepest mines we have dug do not go beyond a few kilometers under the surface while the radius or the distance to the centre of the earth is over 6000 kilometers.

Thus it is very difficult to study the formation of the earth and its structure.

Question 5.
Read the paragraph under the heading of “Internal structure of the earth” and answer the question.

How can you say the earth is still very active?
Answer:

Uses of grid:
1. Network of latitudes and longitudes is called a Grid.

b) Differences between Equator and Prime meridian : 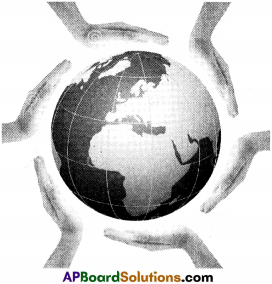 Question 1.
Tick the factors which cause the formation of seasons on the earth : (Text Book Page No. 3)
a) Daily rotation of the earth on its axis.
b) Monthly movement of the Moon around the Earth.
c) Rotation of the Sun on its axis.
d) Revolution of the Earth around the Sun.
e) Tilt of Earth’s axis of rotation to its orbital plane.
f) Spherical shape of the Earth.
g) Earth’s distance from Sun during the annual revolution.
Answer:
d) (✓)
e) (✓)
g) (✓)

Question 5.
Swathi works for a call centre in Hyderabad. Her clients are in the U.S.A. She answers clients’ questions about the computer problems. She always works during the night. Why is this? Use geography to find out! (Text Book Page No. 12)
Answer:
Indian Standard Time is the time observed in India. Its time offset is UTC + 5.30.
United Standard Time is the Central Standard Time. Its time is GMT – 6.00. Thus there is a difference of 11½ hours between Indian Standard Time and American Standard Time. Thus if it is day time in America, in India it is night time. If an American client asks Swathi a question at 11 am in America, Swathi has to answer the same at 10.30 p.m the same day. Thus Swathi should always work at night to answer his clients from the U.S.A.

Question 6.
In earlier classes we have studied about hemisphere. Let us revise it in the image below. (Text Book Page No. 8) 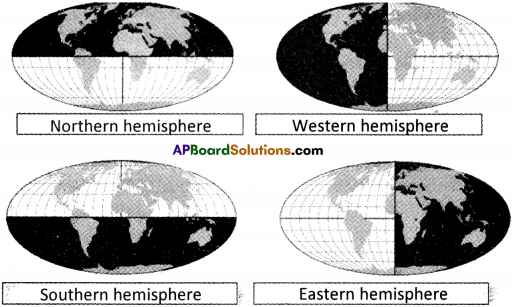 With the help of the above maps complete the following table.

Question 7.
Look at the following pictures. (Text Book Page No. 6) 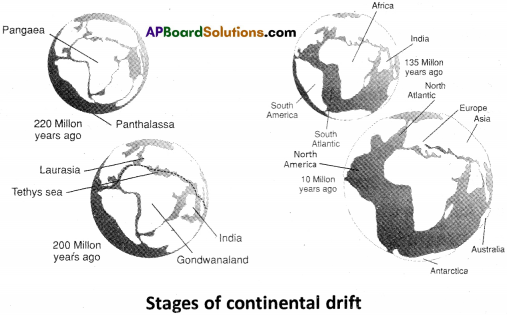 Now answer the following questions.
1. Look carefully at the map of the world, do you find some continents looking as if they are two pieces of a jigsaw puzzle? Name those continents. (Text Book Page No. 7)
Answer:
By observing the maps of the world from 220 million years ago up to the present world, we can find the following continents look as if they are two pieces of jigsaw puzzle. They are :
1) North America and North West Africa.
2) South America and Western Africa.
3) Nothern Africa and Eurasia.
4) Eastern Africa and India.
5) South Eastern Africa and Antarctica.
6) Antarctica and Australia. 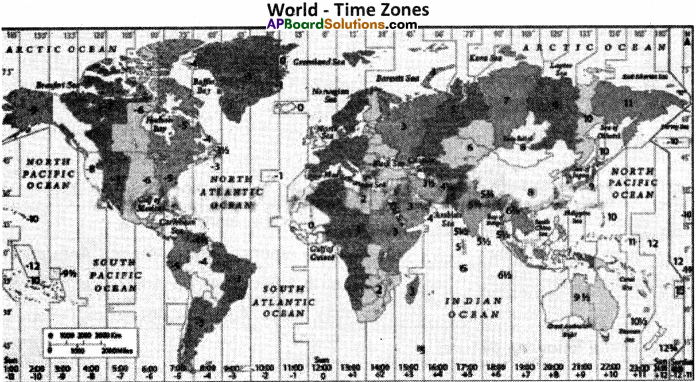 Question 9.
Initially people thought that the earth was in the centre of the universe and human beings the most important creation. What difference does it make to us to know that we are a small insignificant speck in this vast universe? (Text Book Page No. 2)
Answer:
The earth we live on seems big and very important to us. But in the universe as a whole, it is tiny and very insignificant speck of rock. To put things into perspective earth is just a small planet in the solar system, part of a family of bodies that circle round the sun. The sun is just one of billions of stars that makes up our galaxy, and this galaxy is just one of billions that make up a universe bigger than most of us can imagine.

Question 10.
Do you think the Earth was created suddenly or do you think it was formed by long drawn and complex processes? (Text Book Page No. 4)
Answer:
The Earth began to form around four and a half billion years ago. The earth has reached its present form through several phases but not created suddenly.

Question 11.
Some people believe that our being on this earth is the result of a series of fortuitous accidents – it is quite possible that there may not have been any life on the earth. Do you agree? Give your reasons. (Text Book Page No 4)
Answer:
Yes, the earth’s creatures have evolved through a series of contingent and fortuitous events.
1. Our earth is just the right distance from the sun to have a stable orbit. Our orbit keeps us from getting too hot or too cold to survive. Any closer we’d burn up, any farther away we’d freeze to death.

2. Our earth is perfect in both size and mass. Mass is critically important to the formation of an atmosphere. If the earth’s mass were less dense, an atmosphere could not have formed and remained. If it were more dense, the atmosphere would have been uninhabitable.

3. Our earth has just the right mix of the 27 elements needed for life, including carbon, oxygen, nitrogen, phosphorous, potassium, iron, sodium, and copper.

4. Our earth has just right amount of water in the proper ratios of liquid, solid, and gas.

Thus we can say that our being on this earth is the result of fortuitous accidents.