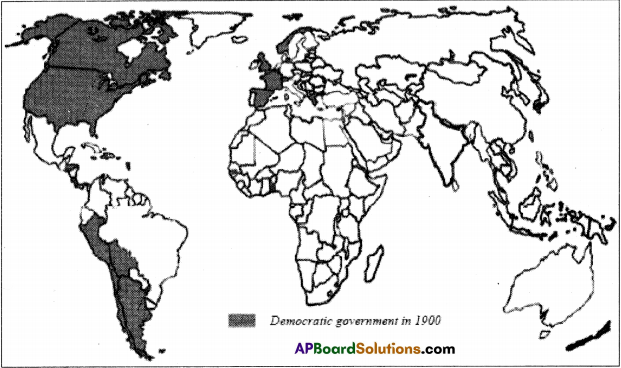 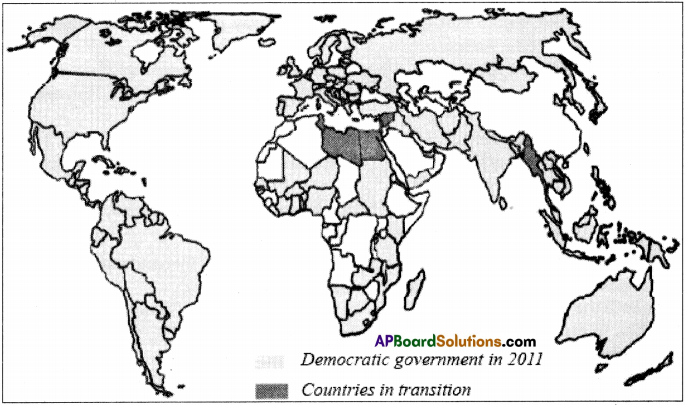 a) On the basis of these maps, identify up to three countries (in some cases you won’t find three countries) that were democratic in these continents for the given years and make a table as given.

b) identify some African countries with democracy in 2011.
Answer:
Egypt, Libya, Tunisia are countries which got independence in and around 2011.

The above countries were not democratic in 2011.

Question 2.
Read the maps again and think about the following points.
a) Based on the maps, can we say that the Twentieth century was a significant era for the spread of democracy?
Answer:

b) During the early 20 century, democracy was mostly in the continents like Europe and Americas. While in certain continents like Africa and Asia there were almost no democratic countries.

c) Even today there are certain areas that have not established democratic governments such as Saudi Arabia and Ethiopia.

Question 3.
Most countries often claim themselves to be democratic by conducting elections. How did this occur in the context of Myanmar and Libya?
Answer:

Both the countries did not have any conditions for a democracy to flourish. Hence they cannot claim themselves to be democratic by conducting elections.

Question 4.
Why do you think the rulers try to control the media? Do you know how is media controlled in your area?
Answer:

Question 5.
Write an imaginary dialogue between a person from Libya and Myanmar comparing the events and struggle for democracy in their respective countries.
Answer:
Person from Libya : Hai, I am xxxx, as I have already told you the monarchy is over thrown in our country.
Person from Myanmar : Yes, I came to know about that who is ruling your country now.
Libya : Gaddafi has taken control of our country. What about your country.
Myanmar : In 1962, the government was overthrown and ‘Ne Win’ military rule is going on.
Libya : First of all we thought he could rule us. He laid foundation for development. What is your country’s position?
Myanmar : Under military rule, our country did not make any progress.
Libya : UNO is supporting our people’s to demands.
Myanmar : Other countries are also showing sympathy us.
Libya : We protested against.
Myanmar : Suu Kyi is in house arrest she played good role.
Libya : Gaddafi is overthrown in 2012. O.K. Bye.
Myanmar : We got new government in 2012. Bye.

Question 8.
What is the role played by Aung San Suu Kyi in fighting for democracy in Myanmar?
Answer:

Question 9.
Read the last paragraph of this chapter and answer the question.

Today, it is increasingly becoming clear to the people that democracy which respects the freedom and rights of all people may be the best way to solve some of the complex problems the countries face. Today, a new kind of democracy is being forged across the world in which even the poorest and the most vulnerable people will have a voice and will be able to influence policies and ensure justice and peace for all.

What is a new kind of democracy?
Answer:

Question 10.
Read the newspapers and note down any news regarding struggle for democracy in Libya or Egypt or any other country. Prepare a file of such news clippings and display in the classroom.
Answer:
Struggle for democracy in Libya :
A few months ago the National Transitional Council (NTC), which has governed Libya since the first few weeks of the revolt in 2011, announced that the assembly would not draft the constitution itself but instead appoint a 60-member committee to draft it. The members of this committee were supposed to be chosen from outside the assembly and represent the country’s three geographic regions of Libya – Tripolitania, Cyrenaica, and Fezzan — in equal numbers. Yet, a few weeks ago, the NTC changed policy again at the last moment, declaring that the members of the constitutional committee would not be appointed by the assembly but directly elected by the people, though it’s not clear when. Confused? So are Libyans.

There are rumors in Libya that most members of the NTC are not happy about the idea of dissolving the institution and going back home. It’s just a rumor, but the group’s decision to revoke constitution-writing powers from the new assembly is making people suspicious, and that’s the point. The NTC likely fears too much power going to Islamists, who are notoriously less friendly toward the NTC than are other groups. We can’t know the NTC’s motivations for sure, but their recent moves diminished the power of the new assembly, which they may have feared would be dominated by Islamists, who swept national elections in neighboring Tunisia and Egypt. A more democratic Libya would re¬ject the NTC’s odd rule-changing and reinstate the elected assembly’s power to write the constitution. After all, this is what Libyans voted for. So should the same Western powers that supported the Libyan revolt.

Libya has come a long way since Gaddafi’s fall, but it still hasn’t been able to solve two major security problems: the armed militias that still roam the country and the state’s deteriorating control of its national borders. Fortunately, this is where new assembly can step in, finding agreement among the various parties and militias and forming a govern-ment, one that is as inclusive as possible, to administer and rebuild Libya. The interna-tional community can help, including by training and equipping the police and security forces, both of which were devastated by the recent conflict.

A successful election is just the start of dealing with one of Libya’s most important challenges right now: national unity. Regional and local claims and jockeying for power threaten to undermine the legitimacy of and support for the national government. A few thousand inhabitants of the eastern provinces care calling for a federalist state, if not of outward secession. While this is definitely a minority position, it is a very dangerous one because it could easily, at the administration’s first real difficulty, split the government and the people, thus slowing or even reversing Libya’s progress toward stability. Most Libyans, as well as the interested Western nations, are rightly happy with Libya’s progress toward becoming a stable, unified, democratic state. But if they want that progress to continue, they’ll all have to work together.

Question 1.
What kind of problems do you think these pose for establishing democratic government? (Text Book Page No. 235)
Answer:

Question 2.
Even though the people had benefited much from the Gaddafi government, why do you think they rose in rebellion against it? (Text Book Page No. 237)
Answer:

Aspects of democracy present in the government of Gaddafi :

Question 4.
Why are civil liberties important for democracy? Explain in the context of Libyan experience. (Text Book Page No. 237)
Answer:

Question 5.
Why do you think democracy was not able to establish itself in Burma after its independence? (Text Book Page No. 240)
Answer:

Question 6.
Why do you think democracy was not able to establish itself in Libya after its independence? (Text Book Page No. 240)
Answer:

Question 7.
How did students and youth play an important role in bringing democracy to both Libya and Burma? (Text Book Page No. 240)
Answer:

Question 8.
What similarities of events do you find in the description of events in Libya and Burma? (Text Book Page No. 240)
Answer:

Question 9.
Underline the statements that are related to political party and voting in both Libya and Burma. (Text Book Page No. 240)
Answer:
a) Libya

Question 10.
Track the changes that you may have heard about Libya and Burma during the year 2012 and write it. (Text Book Page No. 240)
Changes in Libya :

Changes in Burma :
Burma’s Pro-democracy leader Aung San Suu Kyi greeted supporters from her vehicle during her election campaign in Aung Pan in the southern Shan State of Burma (Myanmar) on March 1, 2012.

Question 11.
Dictators try to control press and TV media. Do you know other ways of sharing information and ideas between people? (Text Book Page No. 237)
Answer:

Question 12.
The Tunisian struggle began with the death of one trader. The struggle gained strength largely through the use of social networking websites like Facebook. Why do you think it is not easy for governments to control them? (Text Book Page No. 237)
Answer:

Question 13.
Locate “Libya” and “Myanmar” in the world map. Which continents are they located on? (Text Book Page No. 234)
Answer:
Libya is in Africa continent.
Myanmar is in Asia continent. 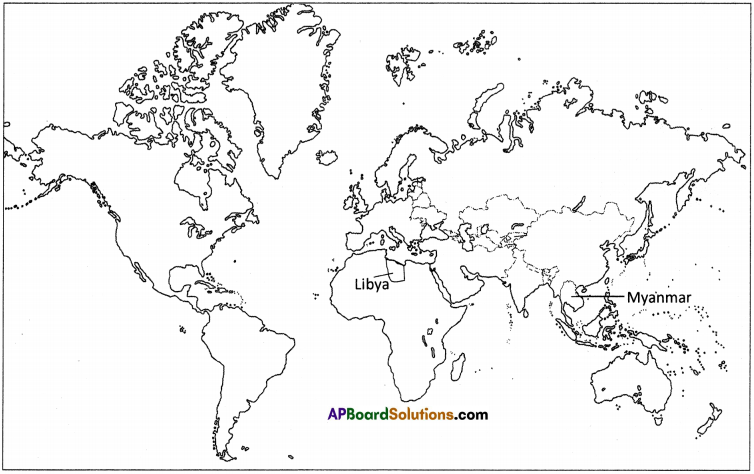