Question 2.
After readingabout mid-eighteenth century Europe, what similarities or differences amongst people existed in the context of: language, ethnicity, trade practices.
Answer:

Question 3.
Do you agree with the statement: “when the emergence of nation states, the dominance of Aristocracy declined and middle class increased”. Give reasons.
Answer:

Question 6.
Draw a table to show the differences and similarities in the nation building process of France, Germany and Italy.
Answer:

Question 7.
Explain what is meant by 1848 revolution of liberals. What were the political, social and economic ideas supported by the liberals?
Answer:
1848 revolt occurred duringthe period of Louis Philippe. Ideas of Socialism, Liberalism and Nationalism were increasing and finally resulted as Revolution of 1848. This revolution was led by liberal nationalists belonging to the educated middle-class and members of the commercial middle classes.
The ideas supported by the liberals were –

Question 8.
Briefly trace the process of Germany unification.
(OR)
Describe the unification of Germany.
Answer:

Question 9.
Locate some changes on Europe map drawn up by the Vienna Congress.
Answer: 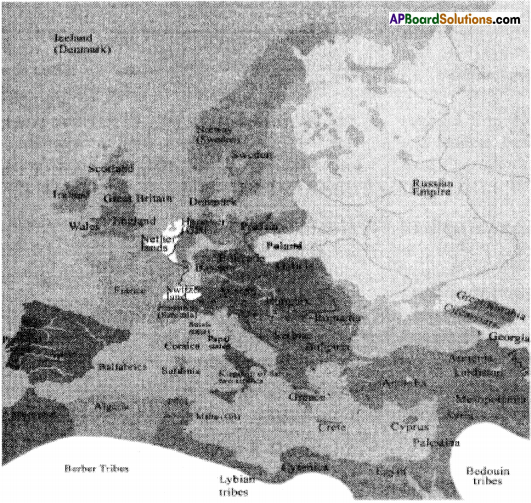 Question 11.
Compare the map of Europe of mid 18th century (1815) with that of the present map of Europe and note down the changes you find, in a note book.
Answer: 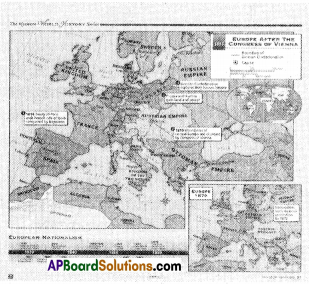 The Congress of Vienna was held in order to draw up a plan to alter Europe politically and territorially so as to prevent the extensive expansion of any one great power, such as that Napoleon had brought about. To main¬tain the balance of power and establish a old regimes and to pacify the situations Vienna congress divided the different regions of Europe were brought under the power of different strongholds of Europe.

Later on, when the nations like Italy and Germany took up the ideas of Nationalism and moved for unification, they defeated those powers, which were being ruled by the other European powers. As a result of this, the structure of Europe, established by the congress of Vienna, got redrawn, and the present day Europe is established. 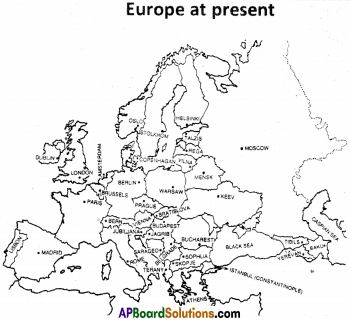 Question 1.
In what ways do you think Napoleon’s conquests would have helped in the emergence of nationalism in those countries? (Text Book Page No. 174)
Answer:

Question 2.
How did nationalism and the idea of the nation-state emerge? (Text Book Page No. 174)
Answer:

Question 3.
Discuss the importance of language and popular traditions in the creation of national identity. (Text Book Page No. 174)
Answer:

Question 5.
Describe the caricature. How does it represent the relationship between Bismarck and the elected deputies of parliament? What interpretation of democratic processes is the artist trying to convey? (Text Book Page No. 181) 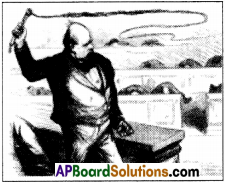 Answer:
Bismarck’s dominance over the elected deputies of the Parliament is shown in the caricature. He followed ‘Blood and iron’ policy. He firmly believed that this policy only could achieve the unification of Germany but not the songs, speeches and festivals.

Question 6.
In what ways do you think the old kingdoms prevented the growth of trade and industry? (Text Book Page No. 176)
Answer:

Question 7.
In what ways would liberal democracy have helped to develop trade and industry in those countries? (Text Book Page No. 176)
Answer:

Question 8.
Do you think our country has a liberal democratic political system ? Give your reasons. (Text Book Page No. 176)
Answer:

Question 9.
Why do you think conservatism needs to curb freedom to express ones opinion and criticise? (Text Book Page No. 176)
Answer:

Question 10.
What is the caricaturist trying to depict? (Text Book Page No. 177)

Answer:
The caricaturist is trying to depict the thoughts of Jacobin clubs and the discontentment among people on the freedom of speech.

Question 11.
Indian nationalists also sought to revive and give importance to folk arts in India. Why do you think they thought this was important?
Answer:

Question 10.
Do you think Italy became a true nation state with its unification under King Emmanuel II? Give your reasons.
Answer:
No, because the unification of Italy was only made territorially. The much of the Italian population was illiterate. They had no idea of nationalist ideology. The peasant masses in Southern Italy had never heard of Italia. Hence, we can say that Italy did not become a true nation state.

Question 11.
Hold a debate in the class between those who agree with conservatism and those who agree with liberal democracy on what is best for the welfare and development of people in Europe or in India.
Answer:
Conservatism means supporting monarchy. The conservatives wanted to protect traditional institutions of state and society like the monarchy, the church, social hierarchies, property and family. They supported the modernisation initiated by Napoleon.

In monarchy, the king is the final. It he is good administrator, the people under him will be benefited. Otherwise they will suffer a lot.

Liberal democracy means the representative of the people rules the country for the will and wish of the people only. Without the concern of the people, he may not have whole right to take any action. The people have the power to remove him from the power when he goes wrong. Hence the government itself is people’s. Thus, democracy is the best form of government.