Fill in the blanks with correct options :
Question 1.
Britain did not depend on different parts of the world for ________ and ________ (labourers; raw material; capital; inventions)
Answer:
labourers, capital

Question 3.
Write two sentences each on following aspects in the context of Industrial revolution:
a) Technology
b) Financing and money
c) Agriculture revolution
d) Transport systems
Answer:
a) Technology :
The commencement of industrial revolution is closely linked to a small number of innovations, beginning in the second half of the 18th century. By the 1830s the following gains had been made in important technologies, e.g. : Textiles, steam power and iron making.

b) Financing and money:
The whole industrial revolution got founded by a few people who held power to issue essentially infinite credit. Most new industries were financed by small investors, merchants, shopkeepers and farmers.

d) Transport Systems :
The growth of industrial revolution developed on the ability to transport raw materials and finished goods over long distances. These facilities were of three main types – Water ways, Roadways and Rail roads.
Out of these three, water transportation was the cheapest.

Question 4.
What do you think is special about inventions happening during the industrial revolution ?
Answer:

Question 6.
What were the relative advantages of canal and railway transportation?
Answer:

Question 7.
Locate the places where iron and textile Industries are mainly concentrated in England during Industrial revolution.
Answer: 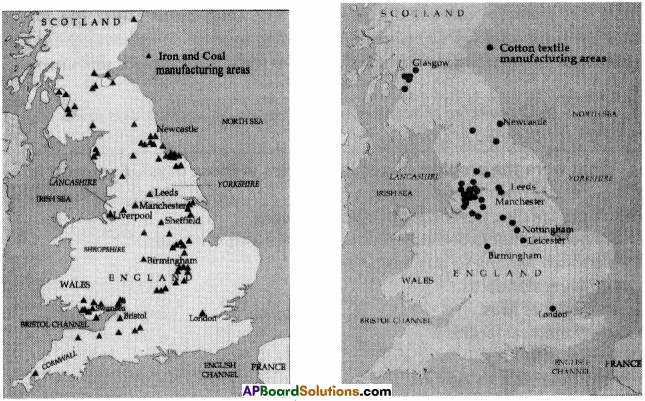 Question 8.
Prepare a table on invention during the time of Industrial Revolution.
Answer:

Question 9.
Read the para under the title “The workers” of Page No. 192 and comment on it.

Q: “What were the problem faced by workers in those days”. Comment it.
Answer:

Question 10.
Mention the consequences of the Industrial Revoltuion in the Economic field. Write a report and present in your class.
Answer:
Some 20th century historians argued that the process of economic change took place gradually.

Question 4.
Discuss the developments in Britain and in other parts of the world in 18th entury that encouraged British Industrialisation. (Text Book Page No. 187)
Answer:

Question 5.
Discuss the effects of early industrialisation on British towns and villagesandcompare these with similar situation in India. (Text Book Page No. 194)
Answer:
New technology and techniques in agriculture paved the way for change. As surplus of cheap agriculture labour led to serve unemployment and rising poverty in many rural areas. As a result, many people left the countryside to find work in towns and cities. So the scene was set for a large scale labour intensive factory system. It led to urbanization.

Question 7.
Why is high quality steel and iron necessary for industrialisation? Discuss in the class. (Text Book Page No. 188)
Answer:
Throughout the 18 and 19 centuries the English steel and iron makers produced blister and crucible steel and iron. In the 18th century innovations like steam boats, rail road and guns increased the demand for fine iron and steel.

Question 10.
Why do you think France lagged behind in industrial development? (Text Book Page No. 195)
Answer:
France was slow in industrialising. Even by the end of 19th century she remained a rural country with a large majority of people cultivating small plots of land. Manufacturers found it more profitable to give out work to rural workers who worked at home rather than to set up factories in towns. Such rural domestic production began to decline after 1850 resulting in economic adversity for the people. Machines in towns began to take over much of the work and only delicate hand work was given out to rural workers. Much of French industrialisation was a result of the spread of railway and road networks after 1860 which created a wide market for its industrial goods.

France also did not develop Banks which could mobilise large amount of capital and lend them to industrialists. As a result most of French manufacturers depended upon family resources. They remained small companies as a result. It also made them slow in adopting new ideas and technologies.

Heavy industry based on iron and coal was slow to develop in France as she did not have good reserves of coal and depended upon expensive imports. Thus French industrialisation remained focused on consumer products like textiles, which were basically small scale enterprises. This was in contrast to the German and British Industrial situation where heavy industries predominated.

So France lagged behind industrial development.

My reaction :
This is very cruel and inhuman treatment. If it is there now-a-days the factory owners should be punished by govt severely.