Question 1.
Name one important beverage crop and specify the geographical conditions required for its growth.
Answer:

Question 2.
The land under cultivation has got reduced day by day. Can you imagine its consequences?
Answer: 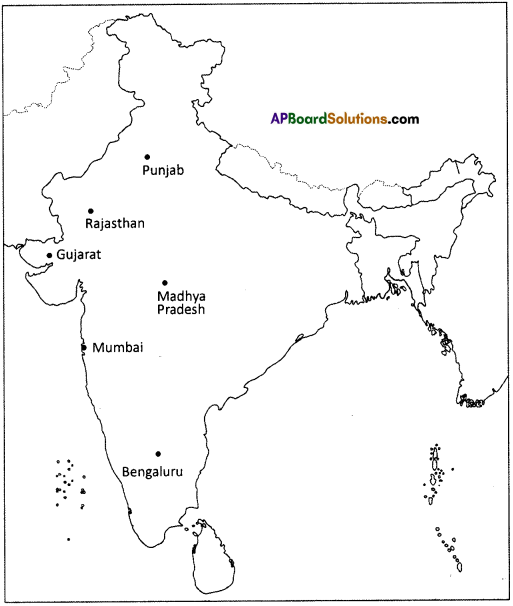 Question 4.
What is a Minimum Support Price (MSP)? Why is a MSP needed?
Answer:
1) A Minimum Support Price is a price at which the farmers can sell their grain, if they want, to the Government.
2) The Government sets the MSP so as to cover the cost of cultivation and allow a little bit of profit to the farmer.
3) Thus the farmer, produced far markets within the country.
4) The farmers are not forced to sell their grains at cheaper prices to the traders.

Question 5.
Explain all the ways the Indian government supported the Green Revolution.
Answer:

Question 6.
Do you think it is important for India to be self-sufficient in food grain production? Discuss.
Answer:

Question 7.
How is dry land agriculture different from agriculture in other areas?
Answer:

Question 8.
Can you recall the incidents such as pesticides being found in soft drinks? How is this related to the use of pesticides? Discuss.
Answer:

Question 9.
Why is chemical fertilizer used in new farming methods? How could use of fertilizers make soil less fertile ? What are the alternative ways of enriching soil?
Answer:

Question 10.
How has the Green Revolution in some areas resulted in short-term gains but longterm losses to farmers?
Answer:

Question 11.
What could be the effects of foreign trade on farmers’ income?
Answer:

Question 12.
In earlier classes we have studied about land distribution. How does the following image reflect this idea? Write a paragraph about this in the context of Indian agriculture.

Answer:
In India more than 70% of the farmers are having only small and marginal holdings,
i. e., Less than 2 hectares and hence most of these farms are not viable. The small farmers cannot produce enough to meet even their basic requirements of their families. They can invest more in agriculture to increase production. They are unable to get financial assistances.
Caption : “A man of sixty acres :
A group of six feet”.

Question 13.
Read the para under the title ‘Fertilizer Problems’ on page 70 and comment on it.

Question 14.
Observe the map given in the page 74 and locate the States where paddy is grown in the India outline map. 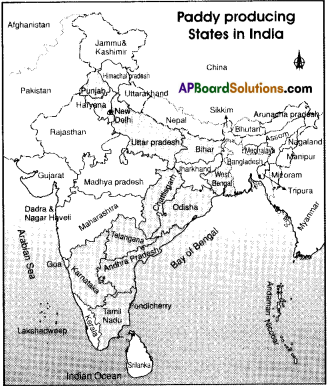 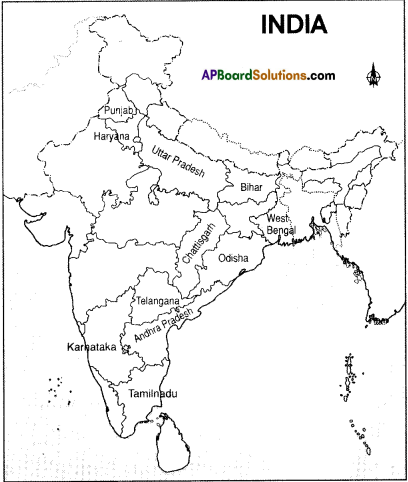 Question 16.
Conduct a Debate : Make the students two teams. One team should support chemical fertilizers and another should support organic farming.
Answer:
Teacher conducts this Debate.
Example : In agriculture it is better to be followed organic fertilizers.
Reasons :
Pesticides can enter the human body.
There is a chance of groundwater damage.
The use of fertilizers can reduce the natural nutrients on the soil surface, etc.

Question 1.
Name some of the states of India where such farming is practised? (Text Book Page No. 59)
Answer:
Punjab, Haryana, Odisha, Karnataka, Telangana, Andhra Pradesh, Madhya Pradesh, Uttar
Pradesh and some parts of Rajasthan.

Question 4.
Complete the bar diagram given on P.65 in Textbook and find out the percentage of cultivators and agricultural labourers in 1971 and 2001 respectively. (Text Book Page No. 65)
Answer:

Complete the data in the table and the explanation in the following passage below.
Majority of farmers operate only small plots of lands. A typical Indian marginal farmer has only aboutacres to cultivate. There are 924 lakh farmers so that ..(2)..% of all farmers are marginal. If we add up the number of small and marginal farmers they form …(3)..% of all farmers. However, even though in percentage terms medium and large farmers is small, the number in absolute terms is large. ..(4)…lakh farmers can be together considered to be in this group. They have a powerful voice in rural areas. This group of large and medium farmers together operate …(5)…% of the land. Each large farmer for example on an average operates ..(6)..acres of land. Compare this with each marginal farmer who operates on an average ..(7)..acres of land. This inequality in distribution of land explains the inequalities in opportunities that they experience, the pov¬erty or growth opportunity that they face.
Answer:

Question 9.
Discuss the differences between self employment and looking for work using examples from your region. (Text Book Page No. 65)
Answer:
1. In self employment, people create their own employment and earn their livelihood. They do not depend either on government or an any other persons for their livelihood.
e.g.: Working in their own farms, opening a shop or public telephone booth or establishing a small organization like manufacturing of candles, matchboxes, etc.

2. On the other hand, some people cannot create their own employment. They generally depend either on government or on any other organization or a person for earning their livelihood.
e.g.: Working in the fields or others, or in a shop or working as government servant, etc.

Question 10.
Do you think that some families who were earlier cultivators are becoming agricultural labourers now? Discuss. (Text Book Page No. 65)
Answer:
Reasons:

Question 11.
In which areas were the new methods of agriculture first tried? Why was the whole country not covered? (Text Book Page No. 68)
Answer:
1. The new methods were initially implemented in Punjab, Haryana, western Uttar Pradesh and in some districts of Telangana, Andhra Pradesh and Tamilnadu.

2. The HYV seeds required a lot of water and these areas were already irrigated.
Hence the new methods were introduced in these areas.

Question 13.
How increase in buffer stock would help to avoid situations of drought and famines? (Text Book Page No. 69)
Answer:

Question 16.
Why should government ban exports /import ? How does this policy help Indian farmers? (Text Book Page No. 71)
Answer:
Foreign trade could cause farmers income to fluctuate a lot. In some years farmers could lose because of cheap imports and fall in prices of farm products. So the exports ad imports should be banned.

Small farmers will not be able to bear this loss. They will get caught in debt trap and become poorer. So this ban helps the Indian farmers in preventing them from debts and heavy losses.

Question 17.
Use an atlas of India to find the locations of the below mentioned dams and mark them on a map of India. Also label the names of the major rivers on which these dams were built. (Text Book Page No. 67)
Answer: 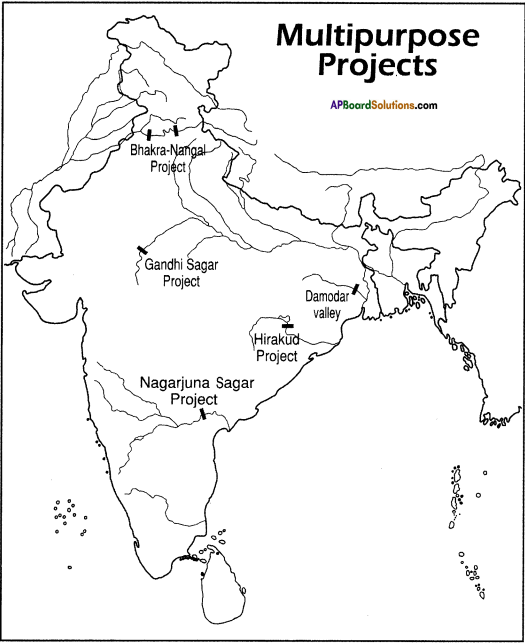