Question 2.
State Ohm’s law and write its mathematical form.
Answer:
At constant temperature, the strength of the current (I) in a conductor is directly proportional to the potential difference (V) between its ends.
∴ I ∝ V ⇒ I = \(\frac{\mathrm{V}}{\mathrm{R}}\) ⇒ V = IR (Mathematical form)
where R is constant, it is called the resistance of the conductor.

Question 7.
Why is manganin used for making standard resistors ?
Answer:
Due to high resistivity and low temperature coefficient of resistance, manganin wire (Cu – 84% + Mn – 12% + Ni – 4%) is used in the preparation of standard resistances. 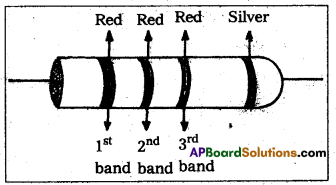 Question 1.
A battery of emf 10V and internal resistance 3Ω is connected to a resistor R.

Question 7.
Two cells of emfs 4.5V and 6.0V and infernal resistance 6Ω and 3Ω respectively have their negative terminals joined by a wire of 18Ω and positive terminals by a wire of 12Ω resistance. A third resistance wire of 24Ω connects middle points of these wires. Using Kirchhoffs laws, find the potential difference at the ends of this third wire.
Answer:

Question 9.
State Kirchhoffs law for an elêctrical network. Using these laws deduce the condition for balance in a Wheatstone bridge. (Ã.P. Mar. 19, ‘16 & Mar. 14)
Answer:
1) Kirchhoff s first law (Junction rule or KCL) : The algebraic sum of the currents at any junction is zero. ∴ ΣI = 0
(or)
The sum of the currents flowing towards a junction is equal to the sum of currents away from the junction.

2) Kirchhoffs second law (Loop rule or KVL): The algebraic sum of potential around any closed loop is zero.
∴ Σ(IR) + ΣE = 0
Wheatstone bridge : Wheatstone’s bridge circuit consists of four resistances R1, R2, R3 and R4 are connected to form a closed path. A cell of emf e is connected between the point A and C and a galvanometer is connected between the points B and D as shown in fig. The current through the various branches are indicated in the figure. The current through the galvanometer is Ig and the resistance of the galvanometer is G.
Applying Kirchhoffs first law at the junction D, I1 – I3 – Ig = 0 —— (1)
at the junction B, I2 + Ig – I4 = 0 —— (2)
Applying Kirchhoffs second law to the closed path ADBA,
-I1R1 + I2R2 = 0
or
⇒ I1R1 + IgG = I2R2 —– (3)
applying kirchhoffs second law to the closed path DCBD,
-I3R3 + I4R4 + IgG = 0
⇒ I3R3 – IgG = I4R4 —– (4)
When the galvanometer shows zero deflection the points D and B are at the same potential. So Ig = 0. 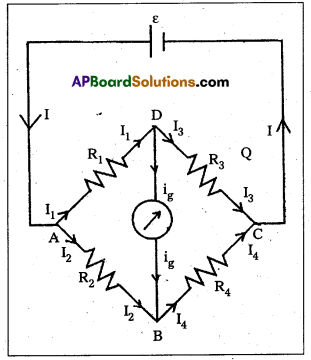 Question 12.
Show the variation of current versus voltage graph for GaAs and mark the
(i) Non-linear region
(ii) Negative resistance region.
Answer:
The relation between V and I is not unique. That is, there is more than one value of V for the same current I. material exhibiting such behaviour is GaAs (i.e., a light emitting diode). 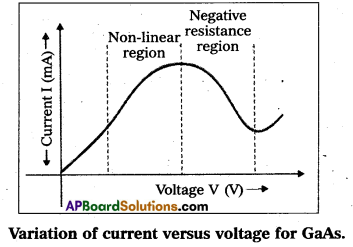 Question 13.
A student has two wires of iron and copper of equal length and diameter. He first joins two wires in series and passes an electric current through the combination which increases gradually. After that he joins two wires in parallel and repeats the process of passing current. Which wire will glow first in each case ?
Answer:
1) In series combination, there will be same current through Iron and as well as copper wire. Since the rate of heat production, P = I2 R or P ∝ R (for the given value of I). The resistance of Iron wire is more than that of copper for the given length and diameter. Hence in Iron wire, the rate of heat production increases gradually. In series combination Iron will glow first.

2) In parallel combination of Iron and copper wire, there will be same P.D (V) across them.
Since the rate of heat production, P = \(\frac{\mathrm{V}^2}{\mathrm{R}}\) or P ∝ \(\frac{1}{R}\) (for the given value of V). The resistance of Iron is more than that of copper for the given length and diameter. Hence in copper wire, the rate of heat production is more.
In parallel combination copper will glow first. 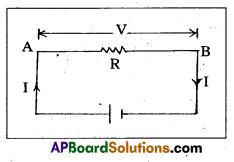 Let V = P.D applied across the ends of AB.
I = current flowing through AB.
t = time for which the current is flowing.
∴ Total charge flowing from A to B in time t is q = It. By definition of P.D, work done is carrying unit charge from A to B = V
Total work done in carrying a charge q from A to B is
W = V × q = V It = I2 Rt
(∵ V = IR)
This work done is called electric work done. If this electric work done appears as heat, then amount of heat produced (H) is given by H = W = I2 Rt Joule.
This is a statement of Joule’s law of heating.
a) If same current flows through an electric circuit, heat is developed.
i.e., H ∝ R.

4) The ratio of the total resistance parallel combination to resistance of wire A, is given by

Question 4.
Three resistors of 4 ohms, 6 ohms and 12 ohms are connected in parallel. The combination of above resistors is connected in series to a resistance of 2 ohms and then to a battery of 6 volts. Draw a circuit diagram and calculate.
a) Current in main circuit.
b) Current flowing through each of the resistors in parallel.
c) p.d and the power used by the 2 ohm resistor.
Answer:
Circuit diagram for the given data is

Since R1 and R2 are connected in parallel effective resistance 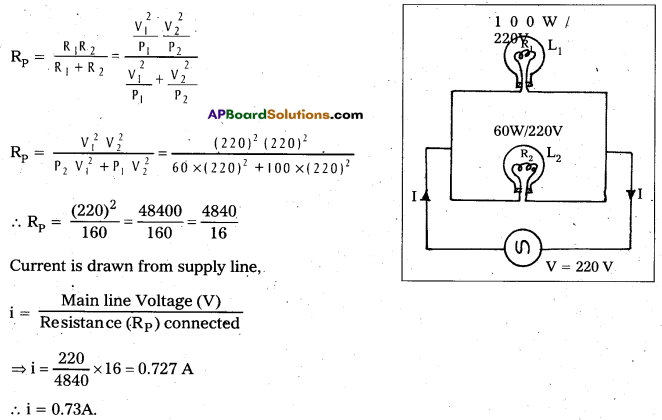 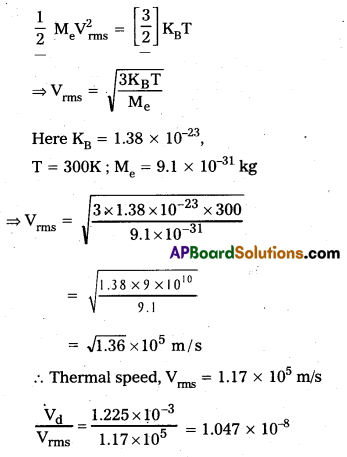 Question 1.
A 10Ω thick wire is stretched so that its length becomes three times. Assuming that there Is no change in its density on stretching, calculate the resistance of the stretched wire.
Solution:
Given R1 = 10Ω,
l1 = 1
l2 = 3l, R2 ? 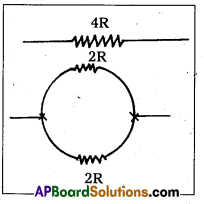 Question 5.
You are given 8Ω resistor. What length of wire of resistivity 120 Ωm should be joined in parallel with it to get a value of 6Ω ?
Solution:
Given, Resistance of resistor R = 8Ω 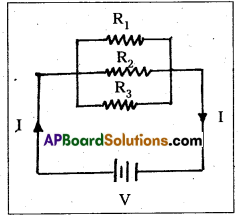 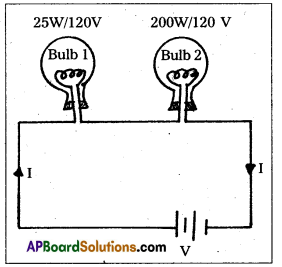 Question 14.
A battery of emf 2.5 V and internal resistance r is connected in series with a resistor of 45 ohm through an ammeter of resistance 1 ohm. The ammeter reads a current of 50 mA. Draw the circuit diagram and calculate the value of r.
Solution:
Circuit diagram for the given data is shown below. 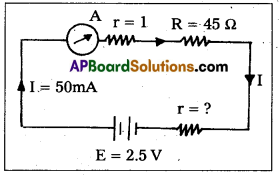 Question 8.
A heating element using nichrome connected to a 230 V supply draws an initial current of 3.2 A which settles after a few seconds to a steady value of 2.8 A. What is the steady temperature of the heating element if the room temperature is 27.0°C ? Temperature coefficient of resistance of nichrome averaged over the temperature range involved is 1.70 × 10-4°C-1.
Solution: 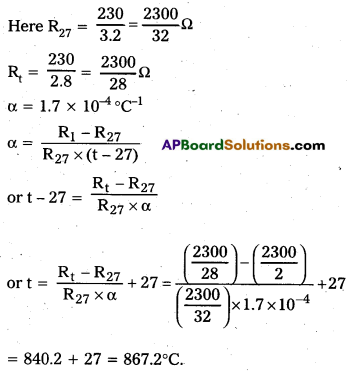 Question 9.
Determine the current in each branch of the network shown in Fig. 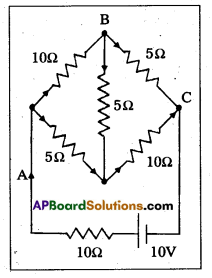 Question 10.
a) In a metre bridge the balance point is found to be at 39.5 cm from the end A, when the resistor Y is of 12.5 Ω. Determine the resistance of X. Why are the connections between resistors in a Wheatstone or meter bridge made of thick copper strips ? 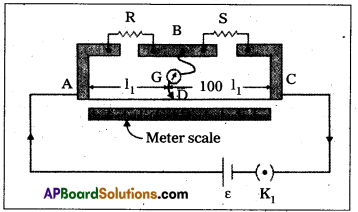 Question 4.
What conclusion can you draw from the following observations on a resistor made of alloy manganin ? 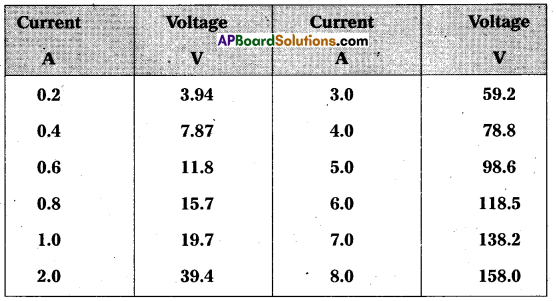 Answer:
Since the ratio of voltage and current for different readings is same so ohm’s law is valid to high accuracy. The resistivity of the alloy manganin is nearly independent of temperature.

b) Is Ohm’s law.universally applicable for all conducting elements ? If not, give examples of elements which do not obey Ohm’s law.
Solution:
Ohm’s law is not applicable for non-ohmic elements. For example, vaccum tubes, semi-conducting diode, liquid electrolyte etc.

Question 6.
Choose the correct alternative :
a) Alloys of metals usually have (greater/less) resistivity than that of their constituent metals.
b) Alloys usually have much (lower/higher) temperature coefficients of resistance than pure metals.
c) The resistivity of the alloy manganin is nearly independent of/increases rapidly with increase of temperature.
d) The resistivity of a typical insulator (e.g., amber) is greater than that of a metal by a factor of the order of (1022/1023).
Solution:
a) Greater
b) Lower
c) Nearly independent
d) 1022

c) Determine the equivalent resistance of networks shown in Fig.

b) Total resistances each of value R are connected in series. Their effective resistance = 5R.

Question 8.
Determine the current drawn from a 12 V supply with internal resistance 0.5Ω by the Infinite network shown in Fig. Each resistor has 1Ω resistance. 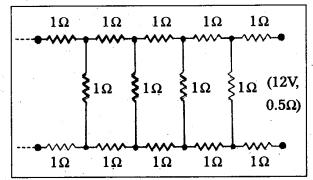 Solution:
Let x be the equivalent résistance of infinite network. Since the net work is infinite, therefore, the addition of one more unit of three resistances each of value of 1Ω across the terminals will not alter the total resistance of network i.e. it should remain x. 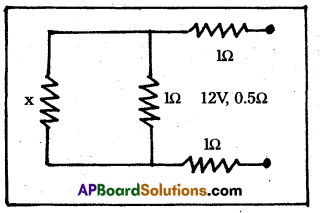 Question 9.
Figure shows a potentiometer with a cell of 2.0’V and internal resistance 0.40 Ω maintaining a potential drop across the resistor wire AB. A standard cell which maintains a constant emf of 1.02 V (for very moderate currents upto a few mA) gives a balance point at 67.3 cm length of the wire. To ensure very low currents drawn from the standard cell, a very high resistance of 600 kΩ is put in series with it, which is shorted close to the balance point. The standard cell is then replaced by a cell of unknown emf ε and the balance point found similarly, turns out to be at 82.3 cm length of the wire. 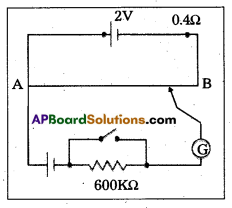 Question 10.
Figure shows a potentiometer circuit for comparison of two resistances. The balance point with a standard resistor R = 10.0 Ω is found to be 58.3 cm, while that with the unknown resistance X is 68.5 cm. Determine the value of X. What might you do if you failed to find a balance point with the given cell of emf ε ? 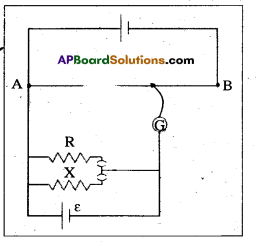 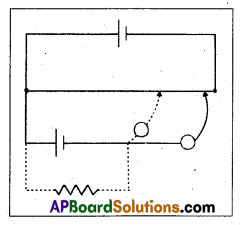 b) i) At a temperature T, the thermal speed of a copper atom of mass M is obtained from
[<(1/2) Mυ2 > = (3/2) KBT] and is thus typically of the order of \(\sqrt{\mathrm{k}_{\mathrm{B}} \mathrm{T} / \mathrm{M}}\), where KB is the Boltzmann constant. For copper at 300 K, this is about 2 × 102 m/s. This figure indicates the random vibrational speeds of copper atoms in a conductor. Note that the drift speed of electrons is much smaller, about 10-5 times the typical thermal speed at ordinary temperatures,

ii) An electric field travelling along the conductor has a speed of an electromagnetic wave, namely equal to 3.0 × 108 m s-1. The drift speed is, in comparison, extremely small, smaller by a factor of 10-11.

Question 5.
A network of resistors is connected to a 16 V battery with internal resistance of 1Ω, a shown in Fig.
a) Compute the equivalent resistance of the network.
b) Obtain the current in each resistor.
c) Obtain the voltage drops VAB, VBC and VCD. 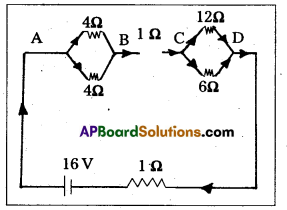 Question 6.
A battery of 10 V and negligible internal resistance is connected across the diagonally opposite corners of a cubical network consisting of 12 resistors each of resistance 1Ω Fig. Determine the equivalent resistance of the network and the current along each edge of the cube.
Solution: 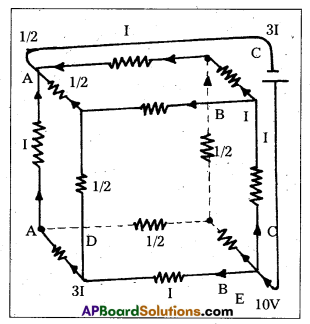 The network is not reducible to a simple series and parallel combinations of resistors. There is, however, a clear symmetry in the problem which we can exploit to obtain the equivalent resistance of the network.

Question 7.
Determine the current in each branch of the network shown in Fig. 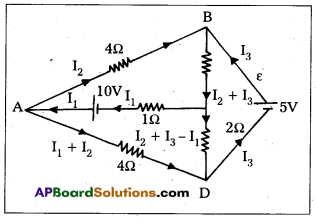 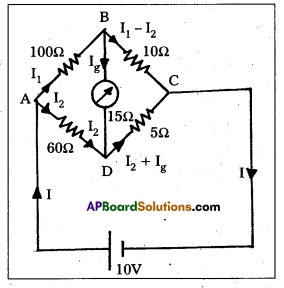 Question 9.
In a metre bridge (Fig.), the null point is found at a distance of 36.7 cm from A. If now a resistance of 12Ω is connected in parallel with S, the null point occurs at 51.9 cm. Determine the values of R and S. 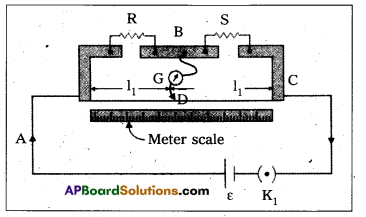 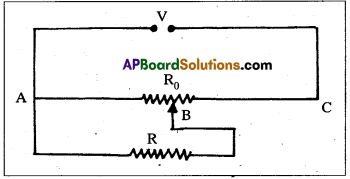 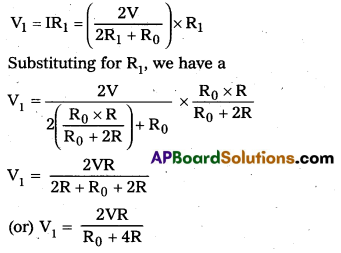