Question 4.
Show the formation of HC/ molecule with Lewis dot structures using the information given below. (TS March 2017)

Question 10.
What is ‘Octet rule’?
Answer:
Octet rule :
Presence of 8 electrons in the outermost shell of an atom or a molecule is called ‘octet rule’.

Question 11.
What is ‘Bond length’?
Answer:
Bond length :
It is the inner-nucleus distance between the two atoms in a molecule. It is measured in Angstrom, 1 Å = 10-8 cm.

Question 12.
How is a cation formed?
Answer:
A cation is formed when an atom loses electrons.

Question 13.
How is an anion formed?
Answer:
An anion is formed when an atom gains electrons.

Question 18.
What is ionic linkage?
Answer:
When two oppositely charged ions are engaged in a bond, it is known as ionic linkage.

Question 19.
On which factors do anions depend?
Answer:

Question 20.
How do you know the valence of a metal?
Answer:
The number of electrons lost from a metal atom is the valence of its element which is equal to its group number.
Ex : Na and Mg have valence 1 and 2 respectively.

Question 21.
How do you know the valence of a non-metal?
Answer:
The number of electrons gained by a non-metal element for its atom is its valency, which is equal to 8 – its group number. Ex : The valency of chlorine is (8 – 7) = 1.

Question 22.
What is Tonic bond’?
Answer:
The electrostatic attractive force that keeps cation and anion together to form a new electrically neutral compounds is called ionic bond.

Question 24.
What is ‘orbital concept of bond formation’?
Answer:
Atoms with half-filled or vacant orbitals try to get paired electrons in those orbitals by bond formation, i.e. by losing, gaining or sharing of electrons.

Question 28.
What is crystal lattice’?
Answer:
In a crystal of an ionic compound, each ion is surrounded by oppositely charged ions. The ions arrange themselves at an optimum distance with regular periodicity in a well-defined three-dimensional network called crystal lattice.

Question 29.
What is Lattice energy’?
Answer:
The energy released when gaseous positive and negative ions are brought together from infinity to form one mole ionic crystals is called lattice energy.

Question 30.
How is a σ (sigma) bond formed?
Answer:
By the axial or head on overlap of pure orbitals or hybrid orbitals of two atoms.

Question 31.
How is a π (pi) bond formed?
Answer:
By the lateral or parallel overlap of only pure atomic orbitals after the a bond formation.

Question 32.
Which type of atoms easily enter ionic bonding?
Answer:
An atom with low ionization potential and another with high electron affinity.

Question 33.
What is a polar bond?
Answer:
A covalent bond in a heteroatomic molecule.
Eg : HCl.

Question 34.
What is meant by inter-nuclear axis?
Answer:
The hypothetical line joining the centre of nuclei of two atoms in a molecule.

Question 41.
What are the forces present in an ionic bond?
Answer:
Electrostatic forces of attraction are present in ionic bonds.

Question 42.
Which forces are weaker forces and where are they operative?
Answer:

Question 50.
Write a short note on bond angles.
Answer:
It is the average angle between two adjacent atoms bonded to the central atom in a molecule. Molecules with larger bond angles are more stable than those with smaller angles.

Question 52.
What is an ion?
Answer:
An ion is an electrically charged atom (or group of atoms).

Question 54.
What factors affect or which factors influence the formation cation or anion?
Answer:
Factors affecting formation of anion or cation are :

Question 60.
How many a and n bonds are there in acetylene molecule?
Answer:
The structure of acetylene is given by
\(\mathrm{H}-\mathrm{C} \equiv-\mathrm{H}\)
So they are 3a and 2n bonds.

Question 64.
Which of the following solutions are conductors of electricity?
a) Sugar solution,
b) Alcohol solution,
c) Glucose solution,
d) Salt solution.
Answer:
Salt solution is good conductor of electricity because common salt (NaCl) is an ionic compound and the rest are covalent compounds.

Question 2.
Between a neutral atom and its cations which has bigger size? Why? (TS June 2016)
Answer: 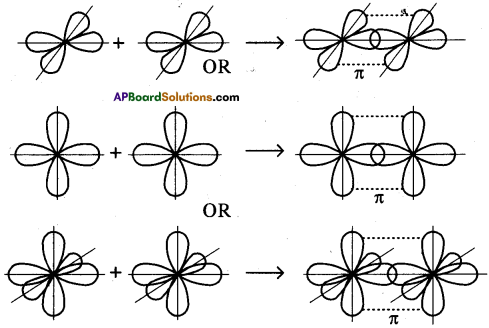 Question 6.
Distinguish between a sigma and a pi bond.
Answer:

Question 8.
Bring out the difference between ionic and covalent bonds.
Answer:

Question 9.
What is hybridisation?
Answer:
In the formation of molecules, the atomic orbitals of the atoms may hybridise.

Question 10.
What is ionisation? Give one example.
Answer:
1) The process of removal of electron (s) from an atom or molecule is termed as ionisation.
Eg : Na → Na+ + e–

2) Dissociation of an ionic solid into constituent ions upon its dissolution in a suitable solvent, is also called ionisation.
Eg : NaCl(aq) → Na+(aq) + Cl–(aq)

Question 11.
Write a short note on octet rule with example.
Answer:
Atoms try to get 8 electrons in their outermost shell (inert gas structure) by combining with other atoms. In order to get 8 outer electrons, atoms may lose to, gain from or share electrons with other atoms.

Question 12.
What are the important characteristic features of hybridisation?
Answer:

Orbitals which are fully-filled are very stable, so need large amount of energy to remove an electron from them.

2) This theory fails to explain the shapes of molecules.

If bond dissociation energy of reactants is less than bond energy of products, then energy is released in the chemical reaction.

Question 18.
Identify the following whether they are either oxidation or reduction reactions.

b) The formula of compound formed between elements Calcium and Fluorine is CaF2.

Question 20.
In the formation of the compound XY2, an atom X gives one electron to each Y atom. What is the nature of bond in XY2? Give two properties of XY2.
Answer:
Two electrons are transferred from X to Y. X forms positive ion and Y forms a negative ion. So the bond formed is ionic in nature.
Properties of ionic compounds :
a) They are hard crystals.
b) They have high boiling point and melting point.
c) They are soluble in water.

Question 22.
What are the differences between sodium atom and sodium ion?
Answer:

Question 26.
The electronic configurations of three elements.
X is 2, 6; Y is 2, 8, 7; Z is 2, 8,1.
In each ease given below state whether the bonding is ionic or covalent and give the formula of molecules of the compound formed,
a) Between two atoms of X.
Answer:
As we move from left to right in a period non-metallic character increases. So Z is a metal and remaining two are non-metals.
Therefore between two atoms of X, there would be covalent bond. The formula of compound is X2.

b) Between the atom X and atom Z.
Answer:
X is a non-metal and Z is a metal. So between these two atoms, there would be an ionic bond.
The valency of X is 2 and the valency of Z is 1.
So the formula of compound is Z2X.

c) Between the atom Y and atom Z.
Answer:
Y is also non-metal and we know Z is metal.
The valency of Y is 1.
So the compound formed is ZY.

Question 28.
Complete the following statements.
i) The bond which is formed by transfer of an electron from one atom A to another atom B is called ……………
Answer:
Ionic bond

Question 1.
What is Hybridisation? Explain the formation of BeF, molecule using hybridisation. (AP June 2017)
Answer:
Hybridisation :
Hybridisation is a phenomenon of intermixing of atomic orbitals of almost equal energy which are present in the outer shells of the atom and their reshuffling or redistribution into the same number of orbitals but with equal properties like energy and shape.

Question 2.
The arrangement of electrons in different shells of atoms of 18th Group elements is given in the table.

(iv) They are stable as they have 8 electrons (except Helium) in their outer most orbit.

2) Electron configuration of Boran at excited state is

The atom ‘B’ tends to form negative ion by gaining two electrons in order to get nearest inert gas. Neon’s configuration is 1s² 2s² 2p6. So its valency is 2.

b) which atom forms positive ion?
Answer:
The atom ‘A’ tends to form positive ion by losing three electrons in order to get nearest inert gas. Neon’s configuration is 1s² 2s² 2p6.

Question 9.
Do you think that a pair of Na+Cl– as units would be present in the solid crystal? Explain.
Answer:

Question 11.
Answer the following.
a) Name the charged particles which attract one another to form ionic or electro-valent compounds.
Answer:
The charged particles are ions which are formed due to transfer of electrons from atom of one element to atom of other element.

Question 12.
The symbols of two elements with their atomic numbers are given below. 16A and 20B
i) Which element will form a cation?
Answer:
The atomic number of B is 20. So its electronic configuration is 1s² 2s² 2p6 3s² 3p6 4s² or 2, 8, 8, 2. So it easily loses two electrons to form cation thereby attain inert gas stability.

ii) Which element will form an anion?
Answer:
The atomic number of A is 16. So its electronic configuration is 1s² 2s² 2p6 3s² 3p4 or 2, 8, 6. So it easily gains two electrons to form anion. Therefore it attains inert gas stability.

iii) Show how each element forms an ion.
Answer:

iv) Which element will be oxidised in forming the ion?
Answer:
B is losing electrons. So it is oxidised. .

iii) Which are solids?
Answer:
Generally ionic compounds are solids. So NaBr, CaO are solids. I2 being a covalent compound still it is solid.

b) A gas of valency 2.
Answer:
The element with atomic number 8 is oxygen. Its electronic configuration is 2, 6. So its valency is 2 and it is a gas.

d) A non metal of valency 4.
Answer:
The element with atomic number 14 is silicon. Its electronic configuration is 2, 8, 4. Its valency is 4 and it is a non-metal.

iii) Covalent compounds are generally gases due to presence of weak electrostatic forces of attraction.
Answer:
This statement is false. The forces are not electrostatic and also they are weak.

iv) Atoms achieve stable electronic configuration only by transfer of electrons from one atom to another.
Answer:
This statement is false because they can acquire by not only electron transfer but also mutually sharing of electrons.

Question 19.
Five atoms are labelled from A to E.

Question 20.
Can you suggest an experiment to prove that ionic compounds possess strong bonds when compared to that of covalent bonds? Explain the procedure.
Answer:

Question 21.
The electronic configurations of following elements are given below.

From these values complete the table.

Question 24.
Draw the structure of molecules by Lewis method.
Answer:
Formation of F2:

b) Formation of O2 molecule by Lewis theory :