Covalency of an element:

3) Anion Formation :
i) Chlorine has shortage of one electron to get octet in its valence shell.
ii) So it gains the electron that was lost by Na to form anion and gets electron configuration of Argon (Ar).

4) Formation of NaCl :
i) Transfer of electrons between ‘Na’ and ‘Cl’ atoms, results in the formation of ‘Na+‘ and ‘Cl–’ ions.
ii) These oppositely charged ions get attracted towards each other due to electrostatic forces and form the compound sodium chloride (NaCl).
Na+(g) + Cl–(g) → Na+Cl–(s) or NaCl

4. Atomic number of Oxygen is 8. Its electronic configuration is 2, 6.

6. These oppositely charged ions get attracted towards each other due to electrostatic forces and form the compound calcium oxide (CaO).
Ca2+ + O2- → Ca2+O2- (or) CaO

ii) ‘B’ cannot form covalent bond. Its valence electrons are 1 only. So it is easy to donate for other atom and become an ion. So it can form ionic bond [Z of B is 11, so it is sodium (Na)].

iii) Element C can form ionic as well as covalent bonds. Atomic number of Cl is 17. It is able to participate with Na in ionic bond and with hydrogen in HCl molecule as covalent bond.

Question 7.
How do bond energies and bond lengths of molecule help us in predicting their chemical properties? Explain with examples. (AS1)
(OR)
How can you explain with examples that bond energies and bond lengths are used to recognise chemical properties?
Answer:
1. Bond length :
Bond length or bond distance is the equilibrium distance between the nuclei of two atoms which form a covalent bond.

2. Bond energy :
Bond energy or bond dissociation energy is the energy needed to break a covalent bond between two atoms of a diatomic covalent compound in its gaseous state. 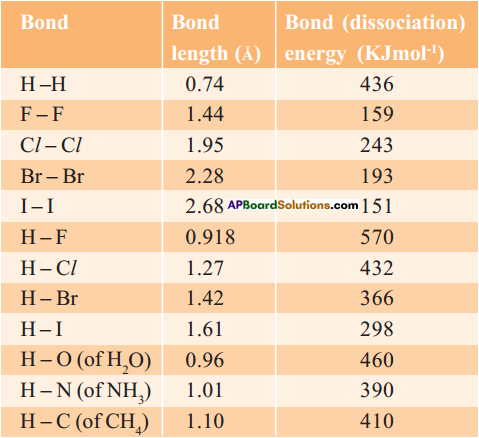 10. Melting and boiling points of substances also can be determined by this bond energies and bond lengths.

The formation of water molecule can be shown like this also

We can explain the formation of Cl2 molecule in this way also.

Question 11.
Represent the molecule H2O using Lewis notation. (AS5)
(OR)
How can you explain the formation of H2O molecule using dot structure?
Answer:
One atom of oxygen shares its two electrons with two hydrogen atoms to form a water molecule.

Question 12.
Represent each of the following atoms using Lewis notation : (AS5)
a) Beryllium
b) Calcium
c) Lithium
Answer:

♦ Carbon and hydrogen bond to form a molecule of methane (CH4):
i) The valency of carbon is 4 and hydrogen is 1.
ii) The chemical formula of the product is CH4.

b) ♦ The Lewis structure of the product that is formed (: NH3)

♦ The Lewis structure of the product that is formed (CH4)

Role of octet in chemical properties of elements :

The Hybridisation of BeCl2 can be explained in this way also :
a) Be atom in its excited state allows its 2s orbital and 2px orbital which contain unpaired electrons to intermix and redistribute to two identical orbitals.
b) As per Hund’s rule each orbital gets one electron.
c) The new orbitals based on the types of orbitals that have undergone hybridisation are called sp orbitals.
d) The two sp orbitals of Be get separated by 180°.
e) Now each chlorine atom comes with its 3pz¹ orbital and overlaps it the sp orbitals of Be forming two identical Be-Cl bonds (σ sp-p bonds).
Cl\(\hat{\mathrm{Be}}\) Cl = 180°.

f) Both the bonds are of same strength.

b) Formation of BF3 molecule : 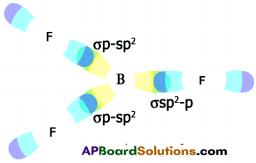 1. Which of the following elements is electronegative?
A) Sodium
B) Oxygen
C) Magnesium
D) Calcium
Answer:
B) Oxygen

Question 1.
How do elements usually exist?
Answer:
They may exist as a single atom or as a group of atoms.

Question 4.
Why do some elements exist as molecules and some as atoms?
Answer:
By following different laws of chemical combination the chemical compounds take place as a result of combination of atoms of various elements in different ways.

Question 5.
Why do some elements and compounds react vigorously while others are inert?
Answer:
1) Number of electrons in their outermost shell.
2) Bond strength between the atoms in compound.

Question 6.
Why is the chemical formula for water H2O and for sodium chloride NaCl, why not HO2 and NaCl2?
Answee:
Valencies of the atoms participating in the molecules.

Question 10.
What is that holding them together?
Answer:
Force of attraction between them.

Question 11.
Why is there absorption of energy in certain chemical reactions and release of energy in other reactions?
Answer:’
Because of bond energy between the atoms in a molecule.

Question 12.
Where does the absorbed energy go?
Answer:
For breaking chemical bonds between atoms in a molecule.

Question 14.
What could be the reason for the change in reactivity of elements?
Answer:
Number of electrons in their outermost orbit.

Question 15.
What could be the reason for this?
Answer:
They have 8 (e–) electrons in their outermost orbit.

Question 16.
What did you notice in Lewis dot structure of noble gases and electronic configurations of the atoms of these elements shown in table – 1?
Answer:
Except He remaining Ne, Ar, Kr have 8 electrons in their outermost orbit.

Question 17.
What have you observed from the above conclusions about the main groups?
Answer:

Question 18.
Why do atoms of elements try to combine and form molecules?
Answer:
To attain stable electronic configuration.

Question 19.
Is it accidental that IA to VIIA main group elements during chemical reactions get eight electrons in the outermost shells of their ions, similar to noble gas atoms?
Answer:
No, it cannot be simply accidental.

Formation of sodium chloride (NaCl) :
Sodium chloride is formed from the elements sodium and chlorine. It can be explained as follows.
Na(s) + ½Cl2(g) → NaCl2

Anion formation :
Chlorine has shortage of one electron to get octet in its valence shell. So it gains the electron from Na atom to form anion and gets electron configuration as that of argon (Ar).

Formation of the compound NaCl from its ions :
Transfer of electrons between ‘Na’ and ‘Cl’ atoms, results in the formation of ‘Na+‘ and ‘Cl–‘ ions. These oppositely charged ions get attracted towards each other due to electrostatic forces and form the compound sodium chloride (NaCl).
Na+(g) + Cl–(g) → Na+Cl–(s) or NaCl 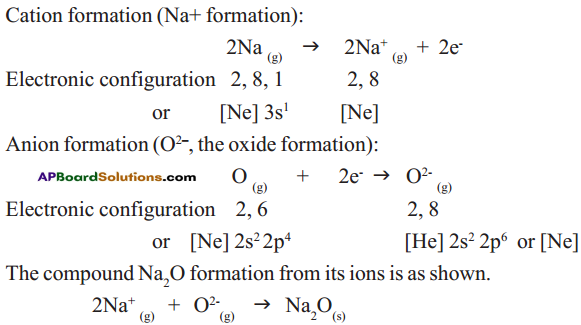 Each aluminium atom loses three electrons and three chlorine atoms gain them, one electron each.
The compound AlCl3 is formed from its component ions by the electrostatic forces of attractions.
Al3+(g) + 3 Cl–(g) → AlCl3(s)

Question 21.
How do cations and anions of an ionic compound exist in its solid state?
Answer:
Ionic compounds exist in crystalline state.

Question 23.
Can you explain the reasons for all these?
Answer:
Ionic bond is formed between atoms of elements with electronegativity, difference equal to or greater than 1.9.

1. Write the Lewis structures of the given elements in the table. Also, consult the periodic table and fill in the group number of the element.
Answer: