Students can go through AP State Board 10th Class Physical Science Notes Chapter 12 Carbon and its Compounds to understand and remember the concept easily.

→ Carbon is present in all substances of animal and vegetable origin.

→ The ability of carbon to unite with an indefinite number of carbon atoms in straight branched or cyclic chains is known as catenation.

→ Carbon and hydrogen combine together in different proportions to form a large number of compounds called hydrocarbons.

→ There are two types of hydrocarbons – saturated and unsaturated.

→ Alkanes are represented by the general formula CnH2n+2.

→ Alkenes are represented by the general formula CnH2n.

→ Alkynes are represented by the general formula CnH2n-2.

→ Organic compounds having the same functional group and common properties but differing in the molecular formula from the next member by one CH2 group, form a homologous series and such compounds are called homologs.

→ Compounds with the same molecular formula but different structural formulas are known as isomers.

→ The decomposition of alkanes on heating in the absence of oxygen is known as cracking.

→ Methane is prepared by heating a mixture of sodium acetate and soda-lime.

→ When ethanol is heated with an excess of concentrated H2SO4 at 160° C ethane gas is produced.

→ Natural gas is used as a fuel.

→ Compressed Natural Gas (CNG) is used as an alternative to petrol as automobile fuel.

→ Ethanol and Ethanoic acid are important carbon compounds in our daily life.

→ The molecules of soap are sodium or potassium salts of long-chain carboxylic acids.

→ Detergents are ammonium or sulfate salts of long-chain carboxylic acids.

→ The action of soaps and detergents is based on the presence of both hydrophobic and hydrophilic groups in the molecule and this helps to emulsify the oily dirt and hence its removal.

→ Alcohols are neutral to litmus.

→ Alcohols are poor conductors of electricity.

→ Carbon chains may be in the form of straight chains, branched chains of rings.

→ Saturated hydrocarbons on combustion give carbon dioxide and water with the liberation of heat.

→ The occurrence of the same element in two or more different forms is known as allotropy.

→ Hybridization: The redistribution of orbitals of almost equal energy in individual atoms to give an equal number of new orbitals of equivalent energy is called hybridization.

→ Allotropy: The property of an element to exist in two or more physical forms having more or less similar chemical properties but different physical properties is called allotropy.

→ Diamond: A transparent form of carbon that is the hardest known material

→ Graphite: A soft dark grey or black form of carbon that occurs naturally as a mineral.

→ Buck minster fullerene: A hollow molecule, spherical like a football, has 20 hexagons and 12 pentagons, having 60 vertices on its surface and made from 60 atoms of carbon.

→ Nanotubes: Nanotubes are another allotropic form of carbon.

→ Catenation: Any element forms bands among its own atoms to give big molecules. This property is called catenation.

→ Tetravalency: The valency of a carbon atom is four. This valency of carbon otherwise is called tetravalency.

→ Hydrocarbons: The compounds containing only carbon and hydrogen in their molecules are called hydrocarbons.

→ Functional group: An atom or a group of atoms in an organic molecule, which is responsible for the compound’s characteristic reactions and determines its properties is known as a functional group.

→ Isomerism: The phenomenon of possessing the same molecular formula but different properties by the compounds is known as isomerism.

→ Nomenclature: The naming of organic compounds is known as nomenclature.

→ Combustion: The process of burning carbon or carbon compound in excess of oxygen to give heat and light is called combustion.

→ Oxidation: The addition of oxygen to a given compound or removal of hydrogen from the compound is called oxidation.

→ Addition reaction: The reaction in which an unsaturated hydrocarbon combines with another substance to give a single product is called an addition reaction.

→ Substitution reaction: The reaction in which one or more hydrogen atoms of a hydrocarbon are replaced by some

other atoms (like chlorine) is called a substitution reaction.

→ Ethanol: Ethanol is the second member of the homologous alcoholic series. Its formula is C2H5OH.

→ Ethanoic adds: It is the second member of the homologous series of carboxylic acids. Its formula is CH3COOH.

→ Ester: Esters are organic compounds that contain the functional group – COO– and whose general structural formula is

→ Esterification: The reaction in which a carboxylic acid combines with an alcohol to form an ester is called esterification.

→ SaponIfication: The process of making soap by the hydrolysis of fats and oils with alkalies is called saponification.

→ Micelle: A spherical aggregate of soap molecules in the soap solution in water is called a micelle. 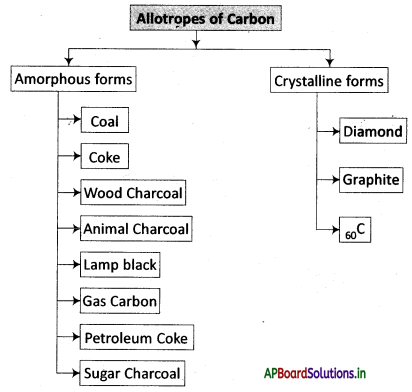