→ Any substance that has a sour taste and turns blue litmus to red is called an ‘acid’.

→ Any substance that has a bitter taste and soapy in nature that turns red litmus to blue is called a base.

→ We use natural and chemical indicators to test for acids and bases.

→ Acid-base indicators are dyes or mixtures of dyes that are used to indicate the presence of acids and bases.

→ When acids and bases react with each other, their respective salts and water are formed. This chemical reaction is called neutralization.

→ Some substances whose odour changes in acidic or basic media are called Olfactory indicators.

→ When a base reacts with a metal with the evolution of hydrogen gas, a salt is formed.

→ When an acid reacts with a metal carbonate or metal hydrogen carbonate gives the corresponding salt, carbon dioxide gas and water.

→ Non-metallic oxides are acidic in nature.

→ Acid solutions have ions and the electric current is carried through the movement of ions in the solution.

→ In glucose and alcohol ions are absent.

→ Bases that are soluble in water are called alkalis.

→ The process of dissolving an acid or a base in water is an exothermic process.

→ Mixing an acid or base with water results in dilution.

→ The strength of an acid or an alkali can be tested by using a scale called the pH scale (0-14) which gives the measure of hydrogen ion concentration in a solution.

→ Living beings carry out their metabolic activities within an optimal pH range.

→ When the pH of rainwater is less than 5.6, it is called acid rain.

→ Mixing concentrated acids or bases with water is a highly exothermic process.

→ Acids and bases neutralize each other to form corresponding salts and water.

→ The water of crystallization is the fixed number of water molecules chemically attached to each formula unit of salt in its crystalline form.

→ Antacids are the mild bases used to control the stomach pain caused due to indigestion.

→ Magnesium hydroxide is known as the ‘milk of magnesia’.

→ Tooth decay starts when the H of the mouth is lower than 5.5.

→ The atmosphere of Venus is made ¿p of thick white and yellowish clouds of sulphuric acid.

→ Beds of rock salts are formed when seas of bygone ages dried up.

→ Washing soda is used in the manufacture of borax.

→ Salts have various uses in everyday life and in industries.

→ Plaster of Paris (CaSO4, 6H20) is used for making toys, materials for decoration and for making surfaces smooth.

→ Indicator: A special substance that gives different colours in acidic, and basic media.

→ Acid: ‘Acid’ is a word derived from the Latin word ‘Acidus’. It means sour. Usually, we call any substance that has a sour taste.

→ Base: The substance that has a bitter taste and is slippery to touch.

→ Red Litmus: A red coloured indicator used to test the presence of basic nature in a substance.

→ Blue Litmus: A blue coloured indicator used to test the presence of acidic nature in a substance.

→ Phenolphthalein and Methyl Orange: The synthetic (chemical) indicators to find the presence of acids and bases.

→ Salts: A substance that is formed as a result of the neutralization reaction between an acid and a base.

→ Neutralization: When acids and bases react, salt and water are formed. This chemical reaction is known as neutralization.

→ Alkali: A base that is soluble in water is called alkali.

→ Strong Base: Base that gives more OH– ions in water.

→ Potenz: A scale for measuring hydrogen ion concentration in a solution is called the pH scale. The ‘P’s in pH stands for Potenz. In German ‘Potenz’ is power.

→ Antacids: A mild base used to get rid of pain and irritation caused due to indigestion of food.

→ Tooth decay: Corrosion of tooth due to the degradation of sugar and food particles remaining in the mouth.

→ Family of Salts: Salts having the same positive or negative radicals belong to a family called a family of salts.

→ Bleaching Powder: The action of chlorine on dry slaked lime.

→ Baking Soda: Sodium bicarbonate salt is used in the kitchen for making tasty and crispy pakoras.

→ The water of crystallization: It is the fixed number of water molecules chemically attached to each formula unit of salt in its crystalline form.

→ Olfactory indicators: The substances whose odour changes in acidic or basic media.

→ Endothermic reaction: A chemical reaction in which heat is absorbed.

→ Exothermic reaction: A chemical reaction in which heat is evolved.

→ Aqueous Solution: The solution in which the solvent is water.

→ The concentration of a Solution: The amount of solute present per unit volume or per unit mass of the solution.

→ Weak acids: Acids that give fewer (less) H3O+ ions (They are not ionized completely).

→ Saturated solution: The solution in which the amount of solute dissolved is equal to solubility.

→ Unsaturated solution: The solution in which solute is less than the solvent.

→ Supersaturated solutIon: The solution in which the solute dissolved is more than its solubility.

→ Acid rain: When the pH of rainwater is less than 5.6, it is called acid rain. 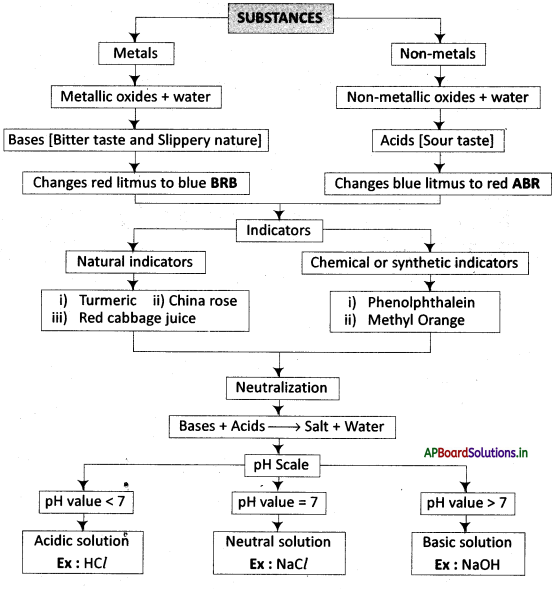