→ In pre-independent India, famines-situations of extreme scarcity of food were common causes of large-scale starvation deaths.

→ Ration shops where people go and buy foodgrains at subsidized prices, mid-day meals that many of you have been eating, Anganwadis where young children are taken care of, including meals during the day are some ways through which government today ensures food security.

→ Producing a sufficient amount of foodgrains is an important requirement of food security.

→ Per person (per capita) availability of foodgrains in the country should be sufficient and also increased over the years.

→ There is a change in consumption pattern with people demanding more fruits, vegetables, milk, meat, poultry, and fisheries.

→ Over the years, although there has been increasing in the production of other food items, it is not sufficient to meet the minimum dietary requirements.

→ The decline in the level of per capita availability of foodgrains is something to be worried about for India’s food security.

→ It is not sufficient to produce food grains and other items. Everyone should be able to buy them for consumption.

→ 80% of people in rural areas in India consume food that is below the calorie standard.

→ Ration shops are important means for people to access foodgrains in India.

→ The Indian government came out with a new law in 2013 called the National Food Security Act to legalize people’s Right to Food.

→ It applies to approximately 2/3rd of the population of India. Every person of low-income families is entitled to 5 kilograms of foodgrains per month at subsidized rates.

→ About 14 crore children studying in schools eat mid-day meals today. This is the largest school feeding program in the world.

→ Food is required by the body for all its functions-for energy, growth, and the capacity to remain healthy and fight illness.

→ A survey conducted by the National Institute of Nutrition, Hyderabad (NIN) across many states in the country confirms the overall alarming status of nutrition in the country.

→ Over a long period of time, 35% to 45% of people are consuming less food than they should.

→ The issue of food security needs careful thinking and efforts in all of the above directions.

→ Production: The process of making or growing goods to be sold.

→ Availability: BeIng able to be obtained or used, usefulness

→ Access: The method or possibility of approaching a place or person or the right to use something

→ NutrItion: The substances that you take Into your body as food and the way that they influence your health.

→ Buffer stock: The stock of food grains (wheat & rice) procured and maintained by the government through the Food Corporation of India (FCI).

→ Hunger: The feeling you have when you need to eat.

→ Ration shops/Fair price shops: The shops where the government provides subsidized prices for food items and fuel for identified families, based on the ration cards.

→ Subsidy prices: To keep the prices low arid In the reach of common people, the government reduces the price by paying Itself the remaining amount.

→ Food Security: The promise of the government to see to produce food grains sufficient for the population of the entire country and make everyone buy Them for consumption.

→ Crop rotation: ChangIng the crop that Is grown on an area of land in order to protect the soil.

→ Water harvesting: The act of gathering water either from rains or from other sources like streams, canals, etc.

→ Crop diversIfication: ChangIng of the crops so that there is a great variety of crops.

→ Agricultural diversification; The careful planning which PnMdes the farmers to take up food crops and non-food crop and dairying together as a greater variety In agriculture.

→ Per capita availability of food grains: The total foodgrains produced In the country summed up with net Imports and subtracted the change In stocks with government divided by the population during the year.

→ Access to food: The ability of each person to buy the food for consumption.

→ UnIversal PDS system: The states following the system in which the low-cost food grains would be available to all.

→ Minimum Support Price: The pre-announced price of the crop, by the government, at which It buys the surplus production from farmers.

→ Non-governmental organizations: The organizations that were not run by the government, but the public in key issues related to people and the environment.

→ Nutrition Status: The nutrition status of children and adults judges whether the food actually consumed by them Is adequate or not or excess.

→ Underweight: Being less in weight is decided by the nutritionists as per their age and height. 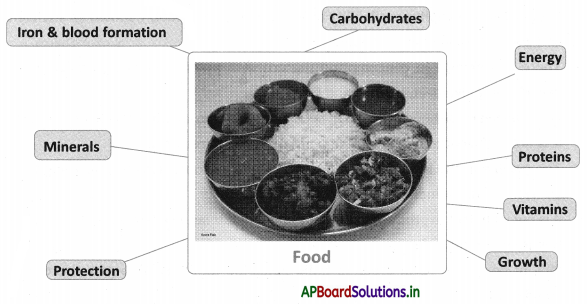