Students can go through AP State Board 10th Class Social Studies Notes Chapter 22 Citizens and the Governments to understand and remember the concept easily.

→ Right to Information Act, 2005 was passed by the Central Government.

→ The act was passed as a result of people’s mobilization as well as in recognition of the provisions in the Constitution that provide Rights to citizens.

→ In any democratic system, governments are responsible and accountable to the people.

→ Disseminating information that is generated in the government department to any citizen who may be interested, now becomes the responsibility of all governments.

→ Every government functions on the basis of certain rules and regulations.

→ Public Information Officers and appellate authorities in the same department are responsible to implement this act.

→ In case some PIOs refuse to give information such officers can be penalized on the orders of SPIC or CPIC.

→ The Act identifies public authorities who are expected to follow various RTI Acts as
(a) the institution created under the Constitution
(b) made under the laws of Parliament or State Legislatures
(c) created through a notification or order of the appropriate governments.

→ The law permits the governments not to disclose certain information that could affect the sovereignty and integrity of India etc.

→ Most of the armed forces and security agencies are outside the purview ap Information Commissions.

→ Any citizen can approach any department of the government and ask for any information, need not explain why he needed it.

→ Individual who is collecting the information can remain anonymous.

→ Transparency of information can help to contain corruption and hold governments accountable to individual citizens also.

→ Appellate Authority: An authority where people can appeal If information is not provided by Public Information Officers.

→ Pudic authority: An institution or organization which has the power over the affairs of common people which Is vested in them through the constitution.

→ Transparency: Quality that makes things easy to understand and allows to see there is no corruption.

→ Legal Service: The help or service offered In matters of law.

→ Lok Adalat: People’s court = It Is an Act to constitute legal services authorities to provide free and competent legal services to the weaker sections of the society

→ Domestic violence: Violence between the members of the same family, usually children, and women are the sufferers.

→ Juvenile home: A home for the culprits of offenses who are young people and not adults (above 18 years of age is adult).

→ Autonomous: Able to govern itself or control Its own affairs (a country, a region, or an organization)

→ Prima fade: At first sight (based on what seems to be the truth when first seen or heard) 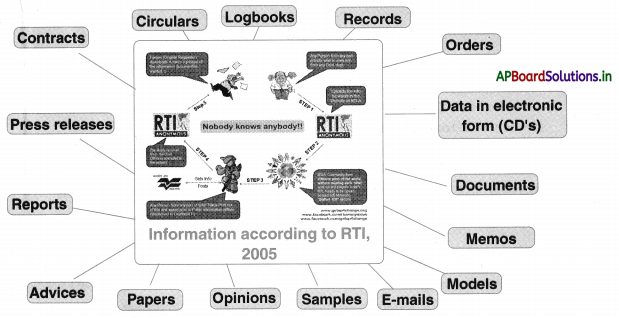