Students can go through AP State Board 6th Class Science Notes Chapter 4 Water to understand and remember the concept easily.

→ We need water for domestic, agricultural and industrial purposes.

→ We get water from different water resources such as canals, tanks, ponds, rivers etc.

→ 3/4th of the surface of the earth is occupied by water.

→ Of the water available on the earth, only 3% is freshwater.

→ We depend on rain for water.

→ The water levels in wells or other water sources go up during the rainy season and down during the summer season.

→ The process of changing water into water vapour is called evaporation.

→ Water evaporates continuously from the surfaces of water bodies and changes into water vapour due to the heat supplied by sunlight.

→ The water vapour which enters into the air through the process of evaporation forms clouds in the sky.

→ Clouds are formed from tiny droplets of water vapour.

→ The process of conversion of water vapour into water is called condensation.

→ The cycle of evaporation and condensation of water, present on the earth’s surface, causes rain.

→ Rain, snow, sleet or hail – any kind of weather condition where somethings falling from the sky is called precipitation.

→ The circulation of water between the ocean and land is known as the water cycle.

→ Deforestation and pollution from factories are now causing global warming.

→ Global warming disturbs the water cycle and causes either less rainfall or too much rainfall.

→ Excessive rains may cause floods while lack of it for long periods may cause droughts.

→ The amount of usable water on earth is limited, so it needs to be used carefully.

→ Water sources are natural resources of water that are useful for different activities such as agricultural, industrial and household etc.

→ Evaporation: The process of water changing into water vapour is called evaporation.

→ Condensation: The process of conversion of water vapour into water ¡s called condensation.

→ Precipitation: Water or frozen water that forms in the atmosphere and falls on the earth.

→ The water cycle: The circulation of water between the earth surface and air.

→ Cloud: A cloud is a large collection of very tiny droplets of water or ice crystals.

→ Water: vapour is the gaseous form of water.,

→ Atmosphere: Atmosphere is a set of gases that surrounds the earth.

→ Droplets: A drop or the droplet is a small column of liquid.

→ Dew: Dew is water in the form of droplets that appears on thin, exposed objects in the morning due to condensation.

→ Rain: Falling drops of water from the clouds.

→ Hails: Hail is a form of solid precipitation of water.

→ Breeze: The wind blowing at a certain speed is called breezing.

→ Drought: A prolonged period of less or no waterfall.

→ floods: Overflow of water that submerges the land.

→ Migration: The movement of people from one place to another place to settle temporarily or permanently.

→ Monsoon: A monsoon is a seasonal shift in wind direction.

→ Hall stones: Sometimes big drops of water solidify into ¡ce and fall as pieces of ice known as hailstones.

→ Snow: Small white crystals of ice formed directly from the water vapour of the water.

→ Deforestation: The forešts are destroyed by cutting trees and not replanting them.

→ Pollution: When harmful substances are added to water, soil and the environment they alter their natural composition.

→ Hazard: Something that is dangerous and likely to cause damage is called hazard.

→ Toxins: A toxin is a poisonous substance produced within the organism s.

→ Freshwater: The water has a low salt concentration which was used by us for our daily purposes.

→ Roof water harvesting: Collecting water from the rooftops of the houses/buildings.

→ 783 million people do not have access to clean water on the globe.

→ Our body uses water to regulate its temperature and maintain other bodily functions. On average, the human body requires 2-3 litres of water per day for proper functioning. Water helps in the digestion of food and the removal of toxins in the body. This is the reason why water bells are introduced in our schools.

→ Water is not only available from sources such as rivers, lakes and ponds but also present in certain fruits and vegetables. Fruits like watermelon and vegetables like cucumber contain a lot of water. Can you suggest some other examples? Our body also contains 70% of water by weight. Think, why we take juicy fruits in summer.

→ Generally, we get rains in some particular months during the year. In our state, rains occur normally from June to September. During that season you might have observed in the sky that clouds are moving along with the winds blowing from the western direction (South West side). These winds are called “South West monsoon”. Similarly, we observe in the months of November and December rains occur due to movements of clouds in the direction of winds blowing from the Eastern side (North East side). These winds are called “North East Monsoon”. Nowadays we are not getting timely rains and seasons are also changing slightly. Think, why is it happening so?

→ There are four main types of precipitation. They are rain, sleet, snow, and hail. Each type begins as either water droplets or ice crystals in clouds. The temperature of the lower atmosphere determines which form the precipitation will take as it falls. 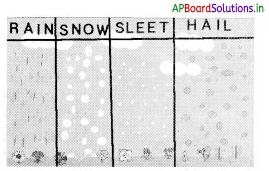