Students can go through AP State Board 7th Class Science Notes Chapter 4 Motion and Time to understand and remember the concept easily.

→ An object is said to be in motion if it changes its position with respect to its surroundings in a given time.

→ An object is said to be at rest if there is no change in its position with respect to its surroundings in a given time.

→ Motion is relative to the observer.

→ If a body covers equal distances in equal intervals of time, it is said to be in uniform motion.

→ If a body covers unequal distances in equal intervals of time, it is said to be in non¬uniform motion.

→ We classify the motion of bodies as

→ If all parts of a moving body move in the direction of motion then the motion is said to be in translatory motion.

→ If a body in translatory motion moves along a straight line then the motion is called rectilinear motion.

→ If a body in translatory motion moves along a curved path then the motion is called curvilinear motion.

→ The ‘to’ and ‘fro’ motion of an object about a fixed point always following the same paths is called oscillatory motion.

→ The speed of an object is the distance travelled by it is a unit of time.

→ Motion is a common experience in our life.

→ An object is said to be in motion if it changes its position.

→ The motion of all particles of a moving body follows a circular path with respect to a fixed centre or axis of rotation.

→ A speedometer helps us to know the speed of a vehicle.

→ Units of speed in the SI system is meters per second.

→ MotIon: A meaningful or expressive change in the position of the body or a part of the body; a gesture.

→ Rest: Termination or absence of motion.

→ Rotatory motion: if a body moving in a circular path around a fixed point.

→ Axis of rotation: An imaginary line passing through the fixed point of rotatory motion.

→ Oscillatory motion: The body is in to and fro motion along the same path of motion.

→ Speed: Distance travelled and divided by the time of travel.

→ Average speed: Speed of an object as the distance travelled by it in a unit of time.

→ Odometer: An instrument that indicates the distance travelled by a vehicle.

→ Rectilinear: Moving in a straight line or lines. 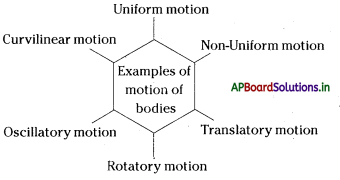 → Louis Pasteur (1822 – 1895):
Louis Pasteur was born in a village Dole in France on 27th December 1822. His father was a soldier. As a school student, Pasteur was a weak-minded scholar.
During his college days, he was inspired by the Lectures of Dumas the famous scientist. Thus Pasteur became a chemist after picturing his Doctorate.

Later Pasteur came to be known for his Pasteurisation, Antirabies vaccination etc. Pasteur dedicated his life to the invention of many precautionary measures to save lives. He died on 27th September 1895 and his grave was erected in the same institute where he conducted his experiments till his death.