→ Babur founded the Mughal Empire in India in 1526 AD. He established control over Agra and Delhi.

→ Humayun was defeated by Sher Khan. He recaptured Delhi with the help of Safavid Shah- in 1555.

→ Akbar became the emperor at the early age of 13. He rapidly conquered Bengal, Central India Rajasthan, and Gujarat. He was the greatest of all the Mughal emperors.

→ Shah Jahan continued campaigns in the Deccan. He faced many revolts by nobles and chiefs. Shah Jahan was imprisoned by Aurangazeb.

→ Aurangazeb faced a large number of revolts all over his kingdom. Shivaji and his own son Akbar revolted against him.

→ Mughal rulers campaigned constantly against rulers who refused to accept their authority.

→ The Mughals married princesses of many of the local rulers as a mark of friendship.

→ The Mughals developed the Mansabdari system in which Mansabdars should not act independently, but they should act as per the wishes of their emperor.

→ Akbar’s revenue minister Todar Mai carried out a careful survey of crop yields, prices, and areas for ten years. On the basis of this data, the tax was fixed on each crop in cash.

→ Today Mai started a revenue system known as Zabt, in which each province was divided into revenue circles with its own schedule of revenue rates for individual crops.

→ The broad features of administration were laid down by Akbar.

→ Akbar wanted to bring together people of all faiths. During the 1570s he started discussions on religious matters with Muslim scholars, Brahmins, Jesuits, and Zoroastrians.

→ Akbar, with the help of Abut Fazl, framed the vision of governance, i.e., the emperor would work for the welfare of all subjects irrespective of their religion or social status.

→ Mansabdar: A-Rank holder, who had joined the Mughals.

→ Jagirdar: One who looked after the Jagirs,

→ Jager: It was a type of feudal land grant in South Asia at the foundation of its Jagirdat system.

→ Zabt: Revenue collected on the basis of the schedule of revenue rates for individual crops is known as Zabt.

→ Elite: Headman or local chieftains.
(OR)
The enormous wealth and resources were commanded by the Mughal nobility. 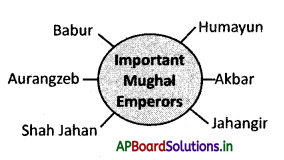