→ We use maps when we want to study the Earth horizontally as a part, such as a country, state, district, town, village, and world as a whole.

→ A rough drawing drawn without scale and directions mainly based on memory and spot observation and not to scale is called a sketch.

→ A map is a representation of the whole Earth or a part of it, on a flat surface according to ^proportionate scale. –

→ A map must have certain components like direction, scale, symbols, etc.

→ North, South, East, and West are called Cardinal directions. Among these four direc¬tions North is treated as principal direction. So all the maps contain a North arrow with the letter N at the top right-hand corner.

→ Scale is another component of a map. The scale of a map is the ratio of a distance on a map to the corresponding distance on the actual ground. A scale can be used to figure out the distance between two locations on a map.

→ The colors used in the maps represent different physical features.

→ Maps can be classified into three types. They are :

→ There are two types of maps based on scale.

→ Small-scale maps: They represent large areas – World, Continents or Countries. They are of two types:

→ Sketch: Drawing based on memory and spot observation and not to scale.

→ Plan: Drawing a small area on a Large scale.

→ Scale: Ratio between the actual distance on the ground and the distance shown on the map with the help of scale.

→ Compass: Drawing circles and arcs and measuring distances between points. 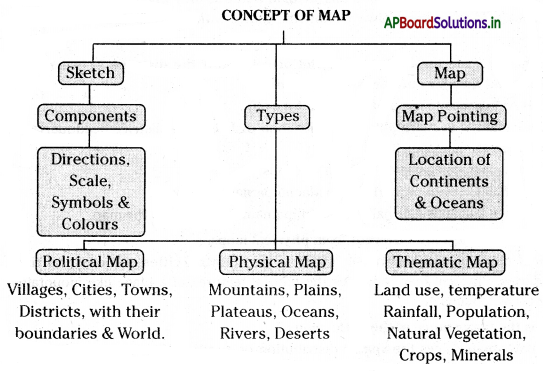 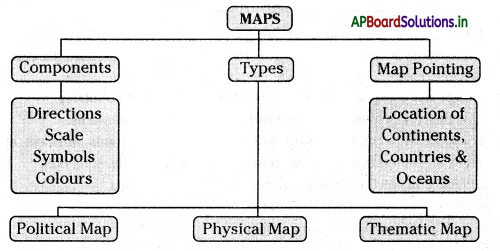