→ Africa is known as the ‘Dark continent’ till the 19th century.

→ The highest peak in Africa is Mount Kilimanjaro in Tanzania.

→ The largest desert in the world is the Sahara, which is in the North part of Africa.

→ Most of Egypt is a desert.

→ The zones south and north of the tropics experience summer as well as winter. They are called ‘Temperate Regions’.

→ In the south, there is another arid region called the Kalahari Desert.

→ Agriculture has long been carried out on river banks as well as on the margins of forests.

→ About 500 years ago, Europeans began their attempts to reach India by the sea route by going around Africa.

→ In 1498, a Portuguese sailor named Vasco da Gama went around the southern tip of Africa and reached India.

→ In the 16th century, many Europeans began migrating to America and started cultivation there.

→ The slaves were greatly oppressed.

→ In the 16th and 17th centuries, numerous companies were engaged in the slave trade.

→ Eventually, the slave trade ended in the 19th century and the slaves were declared free citizens in America in 1860.

→ Nigeria was under British rule until 1960 when it won independence.

→ During the last century, African countries gained independence from the control of European powers.

→ One of the main aims of Europeans in Africa was to exploit these resources by using the servile labor of the Africans.

→ Since 1958, mineral oil has been exported from Nigeria.

→ Colonies: Europeans started halting at African ports. Slowly the Portuguese, Dutch, English, French, and Germans gained a foothold in the interior and colonized these areas.

→ Slave: There was plenty of land in America, but not enough people to work in the fields. It was to fulfill this need for additional working hands in America that the Slav trade from Africa began. Africans were captured and enslaved mainly from the coastal areas of Guinea as well as eastern Africa, In exchange for the slaves, the African tribal leaders accepted guns, iron objects, liquor, and clothes.

→ Plateau: Plateaus are landforms with some unéveness but relatively level surface with a steep slope on one side.

→ Temperate regions: The zones south and north of the tropics experience summer as well as winter. They are called Temperate Regions”.

→ Tropics: One of the two imaginary lines drawn around the world 23°26’.

→ Khmarijaro: The highest peak in Africa is Mount Kilimanjaro in Tanzania.

→ Sahara Desert: There ¡s a region in the north where no rivers are to be seen. This is the Sahara Desert, which receives very scanty rainfall.

→ Nile: There is only one river that crosses the Sahara Desert. The Nile flows through Egypt Most of Egypt is a desert

→ Savanna: Due to moderate rainfall tall grasses grow in this region in some places these grasses are so tall that ever’ elephants can hide in them. Some trees also grow between the grasses. This region is known as the Savanna.

→ Kalahari Desert: In the southern part of Africa, there is an arid region called the Kalahari desert. 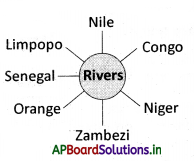