Students can go through AP State Board 8th Class Biology Notes Chapter 10 Not For Drinking-Not For Breathing to understand and remember the concept easily.

→ With the rapid increase in the number of vehicles the problem of automobile pollution has assumed greater significance.

→ Anything that is harmful to the environment is pollution.

→ Some pollutants enter the air by natural disasters like volcano eruptions, forest fires and dust and sand from storms.

→ The two problems of nuclear power are radioactive waste and the possibility of meltdowns like Chernobyl.

→ Use of the fertilizers and pesticides in agriculture pollutes not only air but also land and water.

→ Phosphate and nitrates – chemical fertilizers from agriculture run-off due to rain and industrial waste enter into the water through sewage and pollute the water.

→ Thermal pollution can be natural in the case of hot springs and shallow ponds in the summertime is the reason for increasing temperature in water.

→ Industrial waste contains a large number of harmful chemicals like acids, alkali and metals such as arsenic, lead, mercury and cadmium leading to toxicity.

→ Natural resources are the divine gift for us by nature. Keep these clean and healthy not only for us but also for future generations.

→ Pollution: Anything that is harmful to the environment is pollution.

→ Air pollution: If the solid, liquid and gaseous substances are present in higher volumes than required ¡n the air, it Is harmful to air. It is called air polhk1h.

→ Pollutants: Substances responsible for disturbing the naturally occurring balance are said to be pollutants.

→ Volcanic eruption: Throw out of lava suddenly from a mountain or a hill.

→ Chloro Fluro Carbons (CFCs): CFCs are used in refrigerators. Air conditioners and aerosol sprays. The use of CFCs pollutes the air by depleting the ozone layer as a result of which harmful ultraviolet rays reach the earth.

→ Water pollution: The contamination of water with unwanted and harmful substances such as sewage, toxic chemicals, industrial wastes etc. is called water pollution.

→ Fertilizers & Pesticides: To increase the fertility of the soil some chemical fertilizers are used. To kill the pests on the crop plants farmers make use of pesticides.

→ Eutrophication: The enrichment of water by nutrients, leading to excessive plant growth and depletion of oxygen is known as eutrophication. 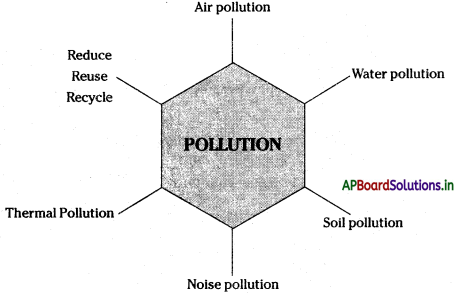 → Most of the Granite factories are present at Chimakurthy of Prakasam district. Cement factories at Macharla, Limestone factories at Piduguralla are the most polluted areas because granite powder, cement dust, limestone dust is released into the air causing pollution. Thermal power plants of Parawada in Visakhapatnam, Krishnapatnam in Nellore districts are releasing the pollutants like fly ash, Sulphur dioxide, and radioactive substance causing air, water and land pollution. People are suffering from lung cancer and skin allergies due to pollution. The people living near the granite factory have faced several health problems like respiratory bronchitis and asthma. Thermal power plants pollute the air by emitting sulphur dioxide, radio-active substances and fly ash. 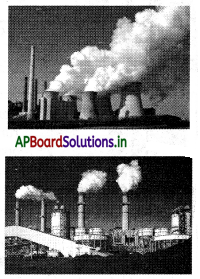 → Har Gobind Khorana:
Har Gobind Khorana (January 9, 1922 – November 9, 2011) was a biochemist who shared the 1968Nobel Prize for physiology or Medicine with Marshall W. Nirenberg and Robert W. Holley for research that helped to show how the nucleotides in nucleic acids, which carry the genetic code of the cell, control the cell’s synthesis of proteins. Khorana was awarded the Louisa Gross Horwitz Prize from Colombia University in the same year.

He became a naturalized citizen of the united states in 1966, and subsequently received the National Medal of Sciences. He served as MIT’s Alfred P. Sloan Professor of Biology and chemistry, emeritus and was a member of the Board of scientific governors at “The Scripps Research Institute.