→ The Mediterranean sea separates Europe from North of the Africa.

→ Asia and Europe are one continuous landmass. This landmass is therefore called Eurasia. & Europe has several high snow-covered mountains.

→ The Alps, the most important mountain ranges of Europe, are covered with snow all year round.

→ The Caucasian Mountains, which lie between the Caspian Sea and the Black Sea, form the southern boundary of Europe.

→ There are no large plateaus in Europe.

→ European rivers are used not only for irrigating the fields but also as major waterways; & The sea coast of Europe is very jagged.

→ Landmasses that are surrounded by the sea on three sides and connected to the mainland on the fourth side are called peninsulas’.

→ The Landmass which is surrounded by water on all sides is called an Island.

→ Bays and gulfs are parts of the sea enclosed by land on three sides.

→ Deep gulfs or bays are preferred for building harbors as large ships can be anchored in them. & Europe has a cooler climate than ours.

→ The waters in the oceans are not static.

→ The warm currents are very good for fish breeding as they contain ample food materials for the fish.

→ The lands along the Mediterranean Sea have a distinct climate called the ‘Mediterranean climate’. & Most European countries including France have four main seasons. They are winter, spring, summer, and autumn.

→ Summer is the season of agriculture in Europe. Crops mature in this season.

→ In European countries, cultivation is possible only for 6 to 7months.

→ Wheat is the main crop of European plains.

→ From very ancient times, the people of Europe have been trading with India and other countries of Asia like Indonesia and China.

→ About five hundred years ago, the West European sailors and traders began to search for new routes to India. The industrial revolution as you know started in England around 1750.

→ Peninsula: Landmass that is surrounded by the sea on three sides and is connected to the mainland on the fourth side is called Peninsula. E.g.: Norway and Sweden.

→ Island: A piece of land that is completely surrounded by water is called an Island. E.g.: Great Britain.

→ Bay: Bays and gulfs are parts of the sea enclosed by land on three sides. In a bay the land curves inwards and the mouth of the bay ¡s usually wide as in the Bay of Bengal.

→ Currents: Movements of water in a particular direction.

→ Gulf: A gulf is a narrow inlet of the sea and has a narrow mouth. E.g.: The entire Baltic sea is a large gulf.

→ Climate: The regular pattern of weather conditions of a particular place (country/continent).

→ Dikes (Dykes): A long thick wall that is built to stop water flooding onto a low area of land, especially from the sea or a channel that carries water away from the land.

→ Westerlies Wiñds blow all the year-round from the Atlantic Ocean towards Europe. Since they blow from the west. These winds are called Westerlies.

→ Ocean currents: The voters in the oceans are not static. They keep flowing’ from one place to another along the continents. These are the ocean currents. 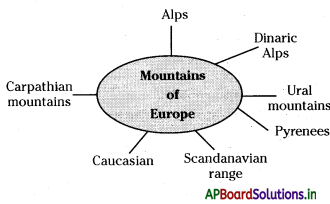 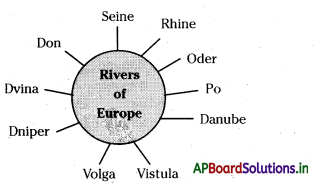