Students can go through AP State Board 8th Class Biology Notes Chapter 11 Why Do We Fall Ill to understand and remember the concept easily.

→ Health is a state of being well to function physically, mentally, and socially with optimum efficiency.

→ The health of all organisms will depend on their surroundings or environment.

→ Social equality and harmony are necessary for individual health.

→ We talk of disease when we can find a specific and particular cause for discomfort.

→ When there is a disease, either the functioning or the appearance of one or more systems of the body will change for the worse.

→ Diseases are classified as acute or chronic, depending on their duration.

→ The disease may be due to infectious or non-infectious causes.

→ Some diseases last for only a very short period of time and these are called acute diseases.

→ Lack of good nourishment becomes the cause of the disease.

→ Diseases, where microbes are the immediate causes, are called infectious diseases.

→ Organisms that can cause diseases are viruses, bacteria, fungi, protozoans, and worms.

→ diseases like typhoid, cholera, tuberculosis, and anthrax are caused by bacteria.

→ Many common skin infections are caused by fungi. Protozoans cause malaria and Kala-azar.

→ Elephantiasis is caused by different species of worms.

→ Many microbial agents that can commonly move from an infected person to someone else are called communicable diseases.

→ Diseases spread through the air are common cold Pneumonia and tuberculosis.

→ The immune system of our body is normally fighting off microbes.

→ The immune cells manage to kill the infection long before.

→ An active immune system recruits many cells to the affected tissue to kill the disease-causing microbes. This recruitment process is called inflammation.

→ In HW infection, the virus goes to the immune system and damages its function.

→ Prevention of diseases is better than its cure.

→ The functioning of the immune system in our body will not be good if proper and sufficient nourishment and food are not available.

→ Having the disease once was a means of preventing subsequent attacks of the same disease.

→ There are vaccines now available for preventing a whole range of infectious diseases against tetanus, diphtheria, whooping cough, measles, polio, and many other diseases.

→ Effective prevention of infectious diseases in the community requires that everyone should have access to public hygiene and immunization.

→ Health: It is a state of being well enough to function physically, mentally, and socially with optimum efficiency.

→ Acute disease: Some diseases last for only very short periods of time, and these are called acute diseases.

→ Infective disease: Diseases, where microbes are the immediate causes, are called infectious diseases.

→ Non-infective diseases: These are not caused by infectious agents. Their causes vary but they are not external causes like microbes that can spread in the community. Instead, these are mostly internal, non-infectious causes.

→ Manifestation: Some characteristic signs or indications in the body that appear during sickness can help us to identify the sickness are called symptoms. The appearance of the symptoms is called manifestation.

→ Immunization: The creation of immunity usually against a particular disease, especially treatment (as by vaccination) of an organism for the purpose of making it immune to a particular pathogen. 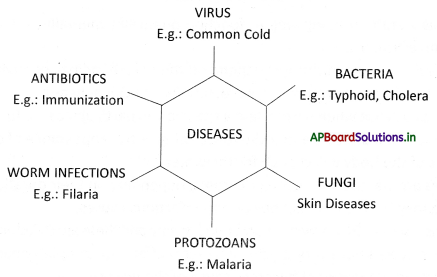 → Alexander Fleming:
Alexander Fleming, the seventh of eight children, was born on a farm in rural Lochfielf Scotland, on August 6, 1881. He attended the Louden Moor School, the Darnel School, and Kilmarnock Academy before moving to London in 1895, where he lived with his older brother, Thomas Fleming. He finished his basic education at the Regent Street Polytechnic.

Fleming was a member of the Territorial Army and served from 1900 to 1914 in London. Scottish Regiment. He entered the medical field in 1901, studying at St. Mary’s Hospital Medical school at the University of London. While at St. Mary’s, he won the 1908 gold medal as the top
medical student.

Alexander Fleming had planned to become a Surgeon, but a temporary position in the Inoculation Department. He worked as a bacteriologist, studying wound infections.

Fleming discovered that antiseptics commonly used at the time were doing more harm than good. In November 1921, while nursing a cold, Fleming discovered lysozyme, a mildly antiseptic enzyme present in body fluids. In September 1928, he noticed that a culture of Staphylococcus aureus he had left out had become contaminated with a mold Penicillium Notatum. He at first called that substance ‘mold juice’ and then named it “Penicillin” an antibiotic – one of the first antibiotics to be discovered.