Students can go through AP State Board 8th Class Biology Notes Chapter 6 Biodiversity and its Conservation to understand and remember the concept easily.

→ Many kinds of plants and animal varieties exist in the world.

→ There is no monogamy or uniqueness in the structure and functions of nature even at the micro-level also.

→ When animals vanish forever from the earth, the species has become extinct.

→ The organisms whose species might be wiped off from the earth in near future are called endangered species.

→ The book published by IUWC that contains the details of Endangered and Extinct species is called RED DATA Book.

→ Plants or animal species found restricted to a particular area of the country are called Endemic species.

→ Diversity is not only in plants and animals, but also great diversity in food crops.

→ The number of insects is decreasing due to the spraying of pesticides.

→ The government of India has taken initiative to conserve wildlife by making National Parks and sanctuaries to conserve the forest.

→ At present, there are 27 tiger reserves in our country.

→ Conservation of Biodiversity is an important issue to protect our nature for future generations.

→ The birds which move from one region to another for food and shelter are called migratory birds.

→ Biodiversity: The term Biodiversity is commonly used to describe the variety and variability of living organisms.

→ Flora and Fauna: There are long sources in nature – these are plants and animals otherwise known as Flora (plants) and Fauna (animals).

→ Deforestation: Cutting down forests for human use is called deforestation.

→ Extinct species: When animals vanish forever from the earth is said that the species has become Extinct.

→ Sanctuary: A sanctuary is a pl2ce where conservation of birds in their natural habitat. Ex: Palak Sanctuary – Adilabad.

→ Migration: The birds which don’t have permanent nestlings, join into small flocks and move from one region to other for food and shelter (nestling) called Migration. Ex: Siberian Cranes.

→ Invasive: Involving the introduction of instruments or other objects into the body.

→ Allen Spades: Non-native species – IntroducIng a species that does not belong to the particular habitat. In Hyderabad Invasion of pigeons (a non-native species) lead to decrease crows.

→ Conservation: Preservation of the natural environment 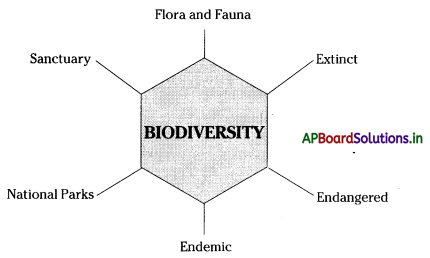 → According to noted ecologist E.O. Wilson, every year nearly 10,000 species or 27 species per day become extinct throughout the world. If this trend of extinction continues, the very existence of man will be affected.

→ India shows a good number of endemic species. About 62% of the worlds’ amphibians and 50% of lizards are endemic to the Western Ghats of India.

→ Invasive Alien Species (IAS)?
When alien species (non-native species) are introduced or invades, it spreads outside the natural habitats and threatens biodiversity. Even transport of few species to a new environment becomes invasive. Their negative impacts on food, security, plant, animal, and human health can be extensive and substantial, eg. The Spanish flag plant of the forests and the water hyacinth of lakes are most notorious for invasions. In cities like Hyderabad invasion of pigeons (a non-native species) lead to a decrease in crows. Nowadays a city like Hyderabad lacks these natural scavengers.

→ Some endangered animals are brought from the wild area and raised in the zoo and released into the wild area again. Here some conservationists disguised as pandas feed the animal before leaving it into the wild. It gives a natural feeling of being fed by mother and living between the pandas. This can survive without human care.

→ Louis Pasteur
French chemist and microbiologist Louis Pasteur was born on December 27, 1822, in Dole, located in the Jura region of France. He was skilled at drawing and painting. He earned his Bachelor of Arts degree (1840) Bachelor of Science degree (1842) and a doctorate (1847) at the Ecole Normale in Paris.

He demonstrated that bacteria were responsible for souring wine, beer, and even milk. He then invented a process where bacteria could be removed by boiling and then cooling liquids. This process is known as pasteurization.

Pasteur’s first vaccine discovery was in 1879, with a disease called chicken cholera. Pasteur went on to extend his germ theory to develop causes and vaccinations for diseases such as anthrax, cholera, TB, and Smallpox. In 1882, he decided to focus his efforts on the problem of rabies. On July 6, 1885, Pasteur vaccinated Joseph Meister, a 9 – year old boy who had been bitten by a rabid dog.

This began an international fundraising campaign to build the Pasteur Institute in Paris, which was inaugurated on November 14, 1888. He died on September 28, 1895.