Students can go through AP State Board 8th Class Biology Notes Chapter 5 Attaining the Age of Adolescence to understand and remember the concept easily.

→ We see changes in the age of 10 – 19 years. This period is called “Adolescence”. During this period changes are observed and outside the body.

→ Growth is one of the important characters of human beings.

→ Changes occurring in adolescent boys and girls are different.

→ Generally, a change in voice is seen during adolescence.

→ The Adam’s apple is actually a partial growth of our voice box or larynx.

→ Many Adolescent boys and girls get pimples on the face, because of increased activity of sweat and sebaceous glands.

→ At this age, male sex organs like the Testes and penis develop completely.

→ In girls, the ovary enlarges and eggs begin to mature.

→ The sex organs by which children are identified as boys or girls at birth represent primary sexual characters.

→ Reproduction is most important for the continuation of the human race.

→ The first menstrual cycle begins at adolescence and is termed as ‘menarche’. Stoppage of menstruation is termed ‘menopause’.

→ Marriage is a social and cultural practice to produce the next generation in our country.

→ Child marriage is a social evil.

→ The legal age for marriage is 18 years for girls and 21 years for boys.

→ Endocrine glands help in the regulation of the functioning of the human body.

→ The secretions of endocrine glands are known as hormones.

→ It is more essential to be careful about health and hygiene.

→ Adolescence: It is a transitional stage of physical and psychological human development during the period between childhood and adulthood.

→ Larynx: It is a part of the human respiratory system. It is generally called the ‘voice box It has vocal cords that vibrate during expiration and produce sounds.

→ Adam’s apple: It is a partial growth of our voice box or larynx. The adam’s apple is formed due to elongation of the thyroid cartilage which protrudes out in front of the neck. This is caused mainly by some male hormones during adolescence.

→ Maturity: Adolescents become capable of reproduction when their testes and ovaries begin to produce gametes. This is called maturity, mostly in between 11 – 15 years.

→ Sweat glands: They are present in the dermis of the skin. They absorb the excess salts and water from the blood vessels and send them outside of the skin as sweat.

→ Sebaceous glands: They are present in the dermis layer of the skin. They produce oil-like substances like sebum. It helps the skin to become dry.

→ Menstruation cycle: The cycle of changes that takes place in the female reproductive system ¡s called the menstrual cycle. It occurs once in 28 to 30 days.

→ Menarche: The first menstrual cycle begins at adolescence and is termed as ‘menarche’. It is a sign of starting the release of ova in female reproductive life.

→ Menopause: At 45 to 50 years of age, the menstrual cycle stops stoppage of menstruation is termed as ‘menopause’.

→ Pregnancy: After the fertilization of male and female gametes the fertilized egg is formed. This is received by the uterus and this results in pregnancy.

→ Endocrine glands: The glands which help in the regulation of the functioning of the human body are called endocrine glands. They release chemical substances called hormones.

→ Hormones: They are chemical substances released by endocrine glands.

→ Testosterone: The male hormone released by the testes.

→ Estrogen: It is a female hormone produced by the ovaries. 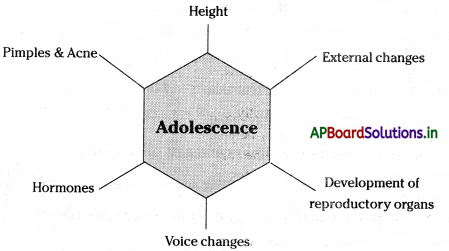 → Consuming tobacco (gutkha, cigarettes, cigar, beedi, khaini) damages the internal organs of the body. The number of addicted people at the age of 15 or below is 57.57 lakhs (68%) in Andhra Pradesh. When they reach 30 years of age their internal organ system becomes damaged, and this leads to several problems and sometimes, may cause death also. It is a dangerous trend in our country. So you should be aware of healthy habits.

→ Charles Robert Darwin:
Charles Robert Darwin (12 February 1809 – 19 April 1882) was an English naturalist. He established that all species of life have descendent over time from w.ctorc, and proposed the scientific theory that his branching pattern of Evolution resulted from u process that he called Natural selection, in which the struggle for existence has a similar effect to the artificial selection involved ¡n selective breeding.

Darwin published his theory of evolution with compelling evidence in his 1859 book on the origin of species, overcoming scientific rejection of earlier concepts of transmutation of species.