→ The word ecosystem was first used in 1935 by A.G. Tansley a British Botanist and Ecologist.

→ Nature works as a system in which organisms and their communities are influenced by many non-living environmental factors.

→ An ecosystem can be defined as a functional unit of nature, where living organisms interact among themselves and also with the surrounding physical environment.

→ Living things like plants, animals and microorganisms are known as biotic components of the ecosystem.

→ There is a feeding relationship between plants and animals.

→ There is an interdependence between plants and animals for space, reproduction, shelter etc.

→ Scientists describe the way energy moves through the ecosystem, they use the term food chains.

→ Several plants, algae use sunlight to make their food and are called producers.

→ Consumers eat other living things and get their energy from them.

→ Decomposers feed on the wastes of plants and animals after they die. They retain nutrients to the soil for the plants to use as the cycle begin again.

→ Mangroves are one of the most productive ecosystems on earth, deriving nourishment from terrestrial fresh water and tidal saltwater.

→ The existence of the living world depends upon the flow of energy and the circulation of materials through the ecosystem.

→ The energy accumulated by plants in an ecosystem is called Primary production.

→ The total energy produced during photosynthesis is the Gross Primary production.

→ Only a small part of the energy is fixed in the form of chemical potential energy in the protoplasm.

→ Habitat: Habitat is the Natural living place of an organism or a group of organisms. Land and water are the major habitats.

→ Ecosystem: An ecosystem is a Natural unit and has both abiotic and biotic components which interact and influence each other.

→ Food web: A food web consists of several interlinked food chains and each organism in a food web will be a member of more than one food chain.

→ Producers: Plants are the only organisms capable of carrying out photosynthesis and producing food for all living organisms in any ecosystem. For this reason, plants are called producers.

→ Consumers: The organisms which consume the food produced by plants are called consumers. Ex: Animals.

→ Decomposers: Some of the organisms, obtain their nutritional requirements by decomposing the dead bodies of both producers and consumers of the ecosystem are called Decomposers. Ex: Bacteria, Fungi.

→ Rodents: Rodents are herbivorous or omnivorous mammals with one pair of chisel-line incisor teeth projecting from each jaw at the front of the mouth and specialized for continuous gnawing. Ex: rat, squirrel etc.

→ Flora and Fauna: All the plants of a particular place and all the animals that live wild in a particular area is called flora and fauna.

→ Mangroves: Mangroves are one of the most productive ecosystems and the changes take place in an ecosystem.

→ Energy flow: All the organisms in an ecosystem derive energy from food to live.

→ Nocturnals: The animals which are active during the night. Ex: bat. 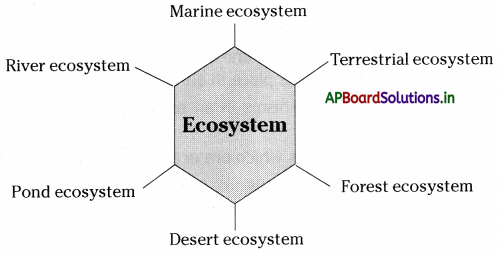 → In Ecosystem, we study the changes occurring in the habitat like organisms moving away from the habitat or entering the habitat.

It is said that there are more microorganisms in the sea than there are stars in the universe. The world’s oceans host 32 of the 34 known phyla on earth and ocean be¬tween 5,00,000 and 10 million marine species. Species diversity is as high as 1000 per square metre in the Indo-Pacific Ocean and new oceanic species are continuously being discovered.

→ Sir Isaac Newton:
Sir Isaac Newton (25 December 1642 – 20 March 1727) was an English Physicist and Mathematician who was widely regarded as one of the most influential scientists of all time and as a key figure in the scientific revolution. His book Philosophic Naturalis Principia Mathematica (“Mathematical Principles of Natural Philosophy”). First published

Newton Principia formulated the laws of motion and universal gravitation that dominated scientists. View of the physical universe for the next three centuries. It also demonstrated that the motion of objects on the Earth and that of celestial bodies could be described by the same principles. By deriving Kepler’s laws of planetary motion from his mathematical description of gravity, Newton removed the last doubts about the validity of the heliocentric model of the cosmos.

Newton built the first practical reflecting telescope and developed a theory of colour based on the observation that a prism decomposes white light into the many colours of the visible spectrum.