→ Human beings are able to produce sound with the help of vocal cords.

→ The material through which sound travels is called a medium.

→ Sound cannot travel through a vacuum.

→ The vibration of the eardrum caused by the sound produced by a vibrating body gives us a sense of hearing.

→ The loudness or feebleness of a sound is determined by the amplitude of vibration.

→ The intensity of sound is measured in decibels (dB).

→ Pitch or shrillness are determined by frequency.

→ The number of vibrations per second is called frequency.

→ The hearing limit of sounds by human beings is called audible range.

→ Excessive or unwanted sounds lead to noise pollution. It may cause health problems for human beings.

→ Attempts should be made to minimize noise pollution.

→ Plantation on the roadside and elsewhere can reduce noise pollution.

→ Vibration: The to ánd fr motion of o body from Its mean position is known as vibration

→ Vocal cords: The two muscular ligaments at the end of the windpipe called vocal cords

→ Medium: The substance which allows the passage of sound is called medium

→ Vacuum: Condition of no medium or without medium

→ Eardrum: The thin membrane at the end of the auditory canal.

→ Loudness: Loudness or softness of sound depends on upoñ’omplitude. Loud sounds are having greater amplitude

→ Amplitude: The maximum displacement of the vibrating body from ¡ts mean position is coiled amplitude.

→ Decibel: Decibel is the unit for measuring the intensity of sound

→ Pitch (Shnllness): The shrillness of a sound known as pitch (or) Sound of higher frequency produce shrillness

→ Frequency: The number of vibrations per second is called frequency.

→ Noise: The sounds which are not pleasant to hear are coiled noises.

→ Music: The sounds which pleasant to hear are called music. 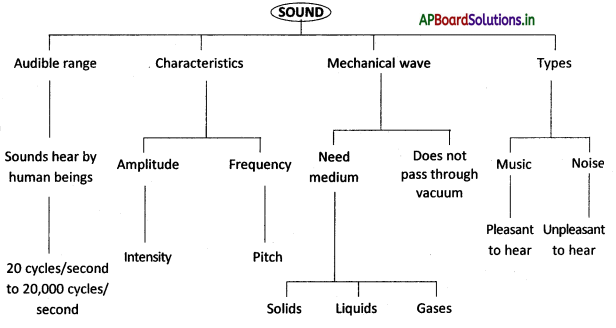