Students can go through AP State Board 10th Class Social Studies Notes Chapter 2 Ideas of Development to understand and remember the concept easily.

→ All persons do not have the same notion of development.

→ Persons seek things that can fulfill their aspirations or desires.

→ At times, two persons or groups of persons may seek things that are conflicting.

→ More income means more of all things that human beings need. c& Average income, which is the total income of the country divided by the total population is also called per capita income.

→ World Development Report brought out by the World Bank in 2013 classified the countries into 3 groups.

→ Countries with per capita income of US $ 12,600 and above per annum in 2012 are called high-income countries or rich countries,

→ Countries with a per capita income of US $1,035 or less per annum in 2012 are called low-income countries.

→ The goods and services or required facilities that are provided by the government or society are called public facilities.

→ Human Development Report compares the countries, the educational levels of people, their health status, and per capita income as measures of development.

→ Per capita income is calculated in US Dollars for all countries so that one can compare all the countries.

→ A small country in our neighborhood, Sri Lanka, is much ahead of India in every indicator of development.

→ The schooling revolution in Himachal Pradesh provided infrastructure in education, and, both the government and society complemented each other to achieve great indicators of education.

→ In the year 2005, the average spending on education by the government in Indian states was Rs. 1,049 per child, Himachal Pradesh was spending Rs. 2,005 per child.

→ Development entails a mix of goals.

→ India, a decade ago was a less developed country, and now transformed into a developing country or middle-income country.

→ Every Indian would like to see India as a developed country.

→ Per capita income: Total income of the country divided by the fatal population.

→ Human development: Comparing the countries and reporting their development based on the educational levels of people, their health status, and per capita income

→ Public facilities: The facilities, i.e., goods and services that are provided by the government or society

→ Education and health Indicators: The indicators which show the educational æd health conditions of the people like average years of schooling, life expectancy at birth, etc.

→ Development: Achieving the goals of making life better for all and bringing more equality

→ The idea of development: Sk the thing that is most important for one which fulfills his developmental goal or aspiration

→ Material things: The things that one can buy with money

→ Non-material things: The things that one cannot buy with money like equal treatment, freedom, etc.

→ Infant Mortality Rate: Out of 1,000 live children burn, the number of children who die within one year.

→ Literacy Rate: The percentage of the literate population in the 7 years and above age group.

→ Net Attendance Rate: Out of the total number of children in the age group 6- 17 years the percentage of children attending school.

→ Life expectancy at birth: Average expected length of life of a person at the time of birth.

→ Average years of schooling: Average number of years of education received by people that age 25 years and above. 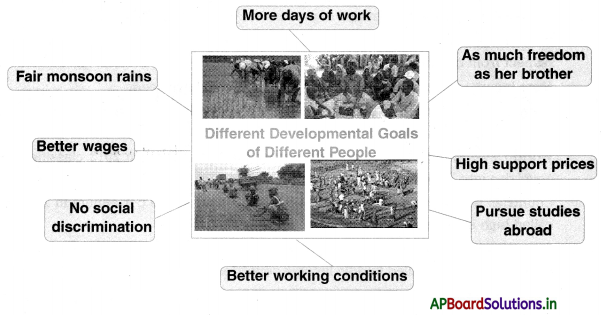 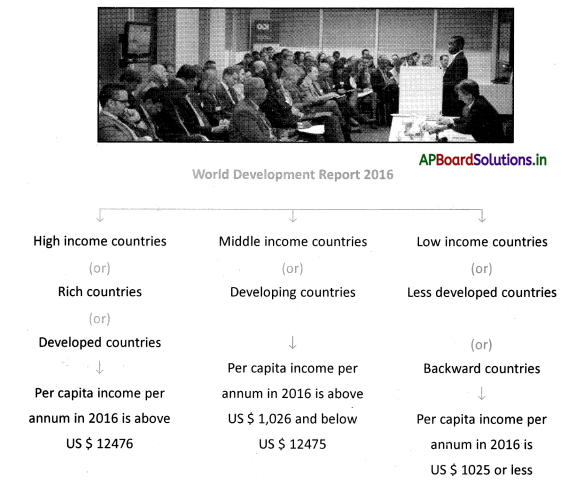