→ Animal behaviour is influenced by many factors.

→ Animal behaviour is the scientific study of the wild and wonderful ways in which animals interact with each other, with other living beings, and with the environment

→ Animal behaviour is studied as instinct, imprinting, conditioning and imitation.

→ Instinctual behaviours are inborn behaviours that need not be learned.

→ Chickens and ducklings recognise their mother because of a behaviour type called imprinting.

→ Conditioning is a type of behaviour involving a response to a stimulus that is different from the natural one.

→ Imitation is a type of behaviour where one animal copies another animal.

→ Human behaviour is more complex because we are more intelligent and aware of ourselves.

→ Identifying or smelling the ability of dogs and searching and communicating the nature of ants is because of pheromones.

→ Beaver, a mammal, which lives in North America builds dams across water streams,

→ In 1977 Ervin Pepperberg made learned more than 100 words to Alex, the grey parrot

→ Some animals spray bad smells through their body to protect from predators. e.g.:Tasmanian devil.

→ The scientific study of animal behaviour is called Ethology.

→ Instinct: This type of behaviour need not be learned. They are present from birth.

→ Reflex: These are also a type of instinctive behaviour. We do not have to learn this.

→ Imprinting: It is a type of behaviour. Recognition of mother by chickens and ducklings after they are hatched from the eggs.

→ limitation: It ¡s a type of behaviour where one animal copies another animal.

→ Ethology: It is the scientific and objective study of animal behaviour.

→ Primates: The group of mammals that includes humans and monkeys. 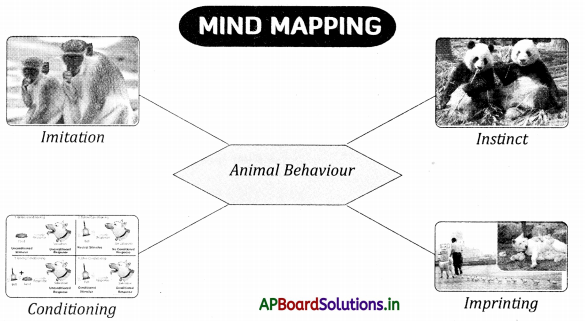 → Konrad Lorenz (1903 to 1989) was an Austrian scientist who studied animal behaviour. He discovered that if he reared geese (give the local name of this) since they hatched; they became imprinted on him. They followed him around and preferred to be near him even when they had grown into adult geese.

→ Some animals spray bad smells through their body to protect from predators. The Tasmanian Devil is the worst smelling animal in the animal kingdom. We are also familiar with a beetle with a foul smell called Bombardier Beetle. 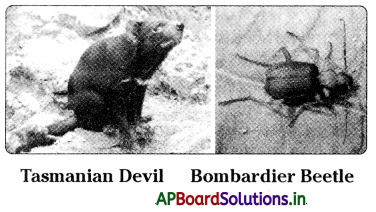 It has two chemicals hydroquinone and hydrogen peroxide stored in its body. Whenever the beetle feels threatened, these chemicals mix with some special enzymes and that heat up the liquids, which gives out a bad smell from its body.