→ A chemical bond is an attractive force between two atoms in a molecule.

→ Atoms which contain 8 electrons in the outermost shell are stable and less reactive.

→ Electron transfer occurs from one atom to another because atoms try to acquire an inert gas configuration.

→ Oxidation involves the removal of electrons.

→ Reduction involves the addition of electrons.

→ Oxidation and reduction go side by side.

→ The compounds containing molecules that are formed by sharing of electrons are known as covalent compounds.

→ Covalent compounds are soft with low melting and boiling points.

→ A strong bond is formed by the maximum overlap of orbitals.

→ π bond has no independent existence. It exists only in the presence of a sigma bond.

→ In a triple bond, one d and two π bonds are present.

→ Molecules having single bonds have only o bonds.

→ The number of valence electrons available in the atoms decides the type of bond.

→ To explain the bond angles in the molecules through covalent bonds the Valence – Shell – Electron – Pair – Repulsion – Theory (VSEPR).

→ VSEPR was proposed by Sidgwickand Powell (1940). It was further improved by Gillespie and Nyholm (1957).

→ Electrons: Elementary particles in an atom with a negative charge.

→ Octet rule: A stable group of eight electrons in the outer shell of an atom is called the octet rule.

→ Chemical bond: The force of attraction between any two atoms or a group of atoms that results in a stable entity is called a chemical bond.

→ Ionic bond: The electrostatic attraction force that keeps cation and anion together to form a new electrically neutral compound is called ‘Ionic bond’.

→ Covalent bond: The chemical bond formed between two atoms by mutual sharing of a pair of valence shell electrons so that both of them can attain octet or duplet in their valence shell is called the covalent bond.

→ Cation: It is a positively charged ion formed by the removal of an electron from an atom.

→ Anion: It is a negatively charged ion formed by the addition of an electron to the atom.

→ Electrovalent: The valence concept has been explained in terms of electrons. It is also called electrovalent.

→ Ionic compounds: The compounds formed by the ionic bonds are called compounds.

→ Electronegative character: The tendency of an atom to gain electrons and become a negative ion.

→ Polar bonds: These are formed due to unequal sharing of electrons by the combining atoms.

→ Bond length: Bond length or bond distance is the equilibrium distance between the nuclei of two atoms that form a covalent bond.

→ Bond energy: An amount of energy associated with a bond in a chemical compound.

→ Linear: A molecule in which the atoms are in a straight line as in carbon dioxide O = C = O.

→ Configuration: The arrangement of electrons around the nudes in an atom.

→ Oxidation: The process in which an atom, ion, or molecule loses electrons.

→ Conductivity: Covalent compounds are poor conductors of electricity due to rigid bonding.

→ Banana bond: Informal name for the type of electron-deficient bond holding the B – H – B bridges in boranes and similar compounds.

→ Bivalent or divalent: Having a valency of two.

→ Alkali: A base that dissolves in water to give hydroxide ions.

→ Atom: The smallest part of an element that can exist chemically.

→ Single bond: Covalent bonds in which one pair of electrons is shared are known as covalent ‘single bond’.

→ Double bond: Covalent bonds in which two pairs of electrons are shared are known as covalent ‘double bonds’.

→ Triple bond: Covalent bonds in which three pairs of electrons are shared are known as covalent ‘triple bonds’.

→ Compound: A substance formed by the combination of elements in fixed proportions.

→ Dissociation: The breakdown of a molecule, ion, etc. into smaller molecules, ions, etc.

→ Electronegativity: It is the ability of the bonded atom to attract the electron density of the shared electrons. 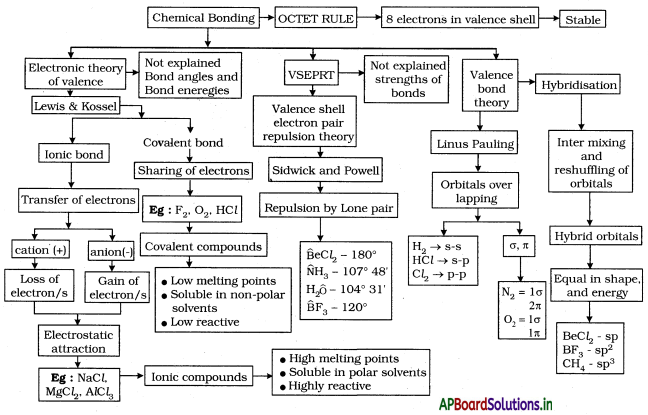