Students can go through AP State Board 8th Class Social Studies Notes Chapter 11A National Movement: The Early Phase 1885-1919 to understand and remember the concept easily.

→ The National Movement in India forms an important epoch in history.

→ With the growth of English education during the late nineteenth century in some major cities, a new consciousness began to develop.

→ In 1866, Dadabhai Naoroji organized the “East India Association” in London to discuss the Indian question.

→ All the provincial nationalistic intellectuals came together in the first session of the Indian National Congress at Bombay in December 1885.

→ Moderates adopted a policy of pray, petition, and protest.

→ With the start of the Swadeshi movement around 1903, the Indian National Congress movement took a major leap forward.

→ Bal Gangadhar Tilak gave the famous slogan, “Swaraj is my birthright and I shall have it.”

→ There was a split in the Congress in the 1907 Surat session.

→ Tilak joined his hands with Annie Besant to launch a movement for ‘Home Rule’.

→ The two factions of the Congress united again in 1916 through the Lucknow pact.

→ Mahatma Gandhi came back from South Africa and joined the Indian freedom movement.

→ Sovereign: Having authority on self (on a country or a person or a race)

→ Racial discrimination: The discrimination showed by the Europeans especially the British towards other races. e.g.: Blacks & Whites.

→ Resolution: A decision which is taken in a meeting or self.

→ Moderates: The freedom fighters who followed a policy of petition, pray, and protest.

→ Petitions: Requisitions to the government or higher authorities to fulfill some wants

→ Swadeshi: Which are not belonged to foreign

→ Boycott: Refuse to deal with a person, organization, or country as punishment or a protest.

→ Picketing: A group of people positioned outside a workplace with the aim of persuading other people not to work during a strike.

→ Extremism: A policy followed by some freedom fighters like Tilak etc., to achieve freedom in extreme ways. 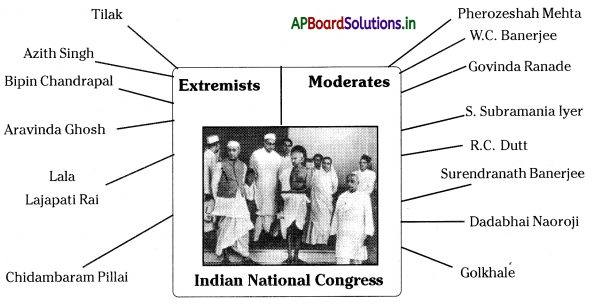