Question 6.
Keeping the length of a simple pendulum constant, will the time period be the same on all planets ? Support your answer with reason.
Answer:
No, Time period depends on acceleration due to gravity (g).
T = 2π \(\sqrt{\frac{l}{g}}\)
g value varies from planet to planet. So time period changes.

Question 7.
Give the equation for the value of g at a depth ‘d’ from the surface of Earth. What is the value of ‘g’ at the centre of Earth ?
Answer:

Question 8.
What are the factors that make ‘g’ the least at the equator and maximum at the poles ? > .
Answer:

Question 11.
What are polar satellites ?
Answer:
Polar satellites are low altitude satellites (500 to 800 km), but they go around the poles of the earth in a north-south direction. Its time period is around 100 minutes.

Question 1.
State Kepler’s laws of planetary motion.
Answer:
The three laws of Kepler can be stated as follows.

Question 2.
Derive the relation between acceleration due to gravity (g) at the surface of a planet and Gravitational constant (G).
Answer:
Consider a body of mass m on the surface of the planet. Let R be the radius of the Earth and M be the mass of the Earth.
Force acting on the body due to gravitational pull of the planet is
F = m g → (1)
According to Newton’s gravitational law, Force on the body is F = \(\frac{\mathrm{GMm}}{\mathrm{R}^2}\) → (2)

Expression for orbital velocity :
Consider a body (satellite) of mass m, revolves round the earth in a circular orbit. Let h be the height of the satellite from the surface of the earth. Then (R + h) is the radius of the orbit.
The Gravitational force of attraction of the earth on the body is given by F = \(\frac{\mathrm{GMm}}{(\mathrm{R}+\mathrm{h})^2}\) ………….. (1)
Where M = Mass of the earth, R = Radius of the earth, G = universal gravitational constant. If V0 is the orbital velocity of the body.
The centripetal force on the body is given by F = \(\frac{\mathrm{mv}_{\mathrm{o}}^2}{(\mathrm{R}+\mathrm{h})}\) …………… (2)
In order to make the body revolve in the same orbit, its centripetal force must be equal to the gravitational force

Question 5.
What is escape velocity ? Obtain an expression for it.
Answer:
Escape velocity : It is the minimum velocity with which a body should be projected, so that it moves into the space by overcoming the earth’s gravitational field.

Question 10.
An object projected with a velocity greater than or equal to 11.2 kms it will not return to earth. Explain the reason.
Answer:
The escape velocity on the surface of the earth (ve) = 11.2 km/s. Any object projected with the velocity greater then (or) equal to 11.2 km/s it will not come back. Because it has overcome the earth’s gravitational pull.
So an object never come back to earth.

Expression for gravitational potential energy : Consider a gravitational field due to earth of mass M, radius R. The mass of the earth can be supposed to be concentrated at its centre 0. Let us calculate the gravitational the potential energy of the body of mass m placed at point p in the gravitational field, where OP = r and r > R. Let OA = x and AB = dx.
The gravitational force on the body at A will be
F = \(\frac{\mathrm{GMm}}{\mathrm{X}^2}\) ……………… (1)
Small amount of work done in bringing the body without acceleration through a small distance dx is given by
dw = Force × displacement
dw = F × dx
dw = \(\frac{\mathrm{GMm}}{\mathrm{X}^2}\) × dx ……………… (2)
Total work done in bringing the body from infinity to point P is given by 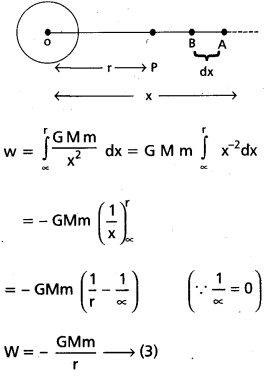 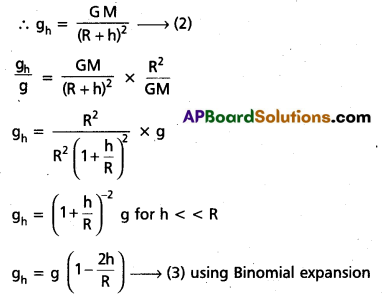 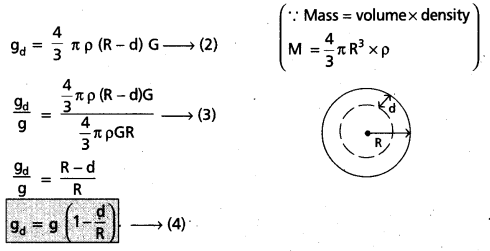 The value of g decreases with depth.

Question 3.
State Newton’s Universal Law of gravitation. Explain how the value of the Gravitational constant (G) can be determined by Cavendish method.
Answer:
Newton’s law of gravitation :
“Every body in the universe attracts every other body with a force which is directly proportional to the product of their masses and inversly proportional to the square of the distance between them”
Determination of G value by cavendish method : 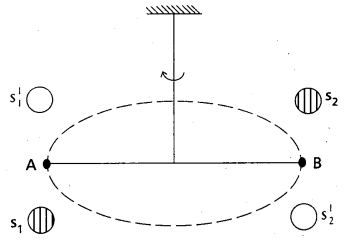 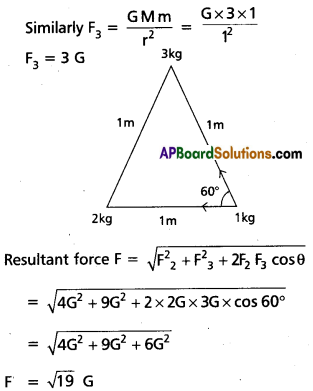 Question 6.
A satellite orbits the earth at a height equal to the radius of earth. Find it’s
(i) orbital speed and
(ii) Period of revolution
Solution:
Height h = R 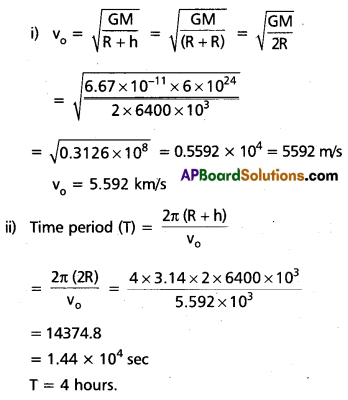 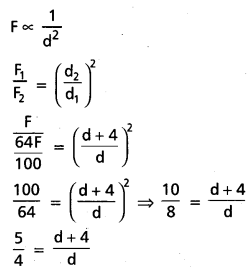 Question 8.
Four identical masses of m are kept at the corners of a square of side a. Find the gravitational force exerted on one of the masses by the other masses.
Solution: 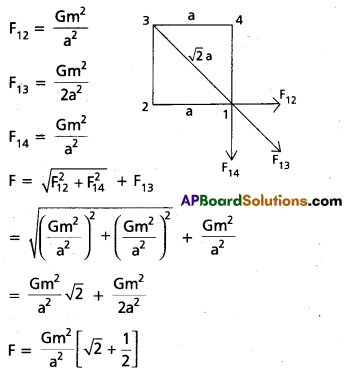 Question 10.
Three uniform spheres each of mass m and radius R are kept in such a way that each touches the other two. Find the magnitude of the gravitational force on any one of the spheres due to the other two.
Solution: 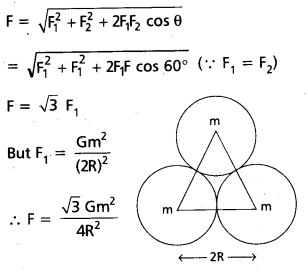 Question 11.
Two satellites are revolving round the earth at different heights. The ratio of their orbital speeds ¡s 2 : 1. If one of them is at a height of 100 km, what is the height of the other satellite ?
Solution: 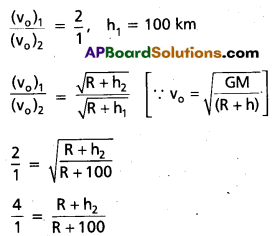 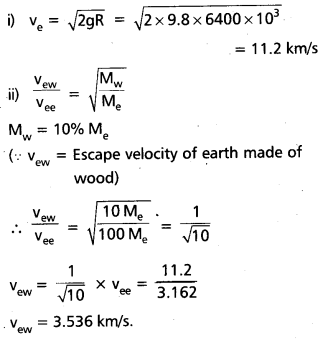 b) Yes, if the size of the spaceship orbiting around the earth is large enough, an astronaut inside the spaceship can detect the variation in g. 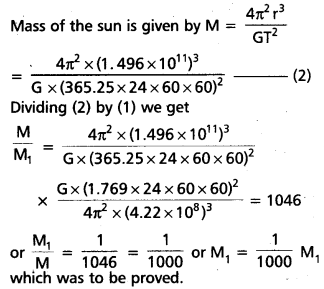 Question 6.
Choose the correct alternative :
a) If the zero of potential energy is at infinity, the total energy of an orbiting satellite is negative of its kinetic/potentia! energy.
b) The energy required to launch an orbiting .satellite out of earth’s gravitational influence is more/less than the energy required to project a stationary object at the same height (as the satellite) out of earth’s influence.
Solution:
a) Kinetic energy
b) Less.

Question 7.
Does the escape speed of a body from the earth depend on (a) the mass of the body, (b) the Ideation from where it is projected, (c) the direction of projection, (d) the height of the location from where the body is launched ?
Solution:
The escape velocity is independent of mass of the body and the direction of projection it depends upon the gravitational potential at the point from where the body is launched. Since this potential depends slightly on the latitude and height of the point, therefore, the escape velocity depends slightly on these factors.

Question 8.
A comet orbits the sun in a highly elliptical orbit. Does the comet have a constant (a) linear speed, (b) angular speed, (c) angular momentum, (d) kinetic energy, (e) potential energy, (f) total energy throughout its orbit ? Neglect any mass loss of the comet when it comes very close to the Sun.
Solution:
A comet while going on elliptical orbit around the sun has constant angular momentum and total energy at all locations but other quantities vary with locations.

Question 9.
Which of the following symptoms is likely to afflict an astronaut in space
(a) swollen feet,
(b) swollen face,
(c) headache,
(d) orientational problem.
Solution:
a) We know that the legs carry the weight of the body in the normal position due to gravity pull. The astronaut in space is in weightless state. Hence, swollen feet may not affect his working.

d) Space also has orientation. We also have the frames of reference in space. Hence, orientational problem will affect the astronaut in space.

Question 10.
In the following two exercises, choose the correct answer from among the given ones : The gravitational intensity at the centre of a hemispherical shell of uniform mass density has the direction indicated by the arrow (see Fig) (i) a, (ii) b, (iii) c, (iv) 0. 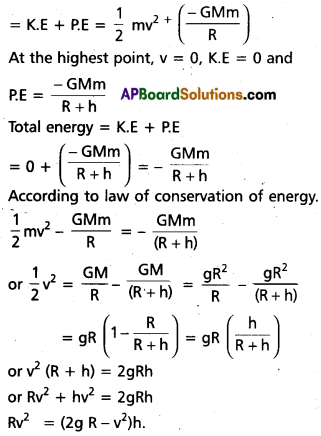 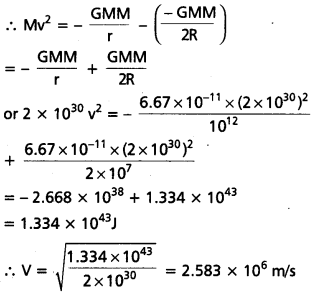 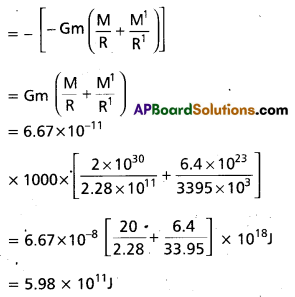 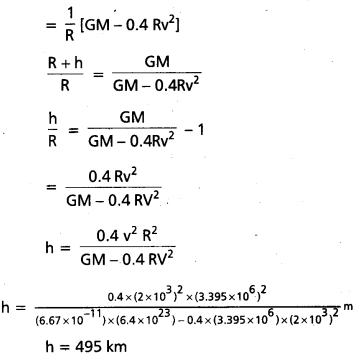 Question 1.
Let the speed of the planet at the perihelion P in Fig. be υp and the Sun- planet distance SP be rp. Relate {rp, υp} to the corresponding quantities at the aphelion {rA, υA}. Will the planet take equal times to traverse BAC and CPB ?

(a) An ellipse traced out by a planet around the sun. The colsest point is P and the farthest point is A. P is called the perihelion and A the aphelion. The semimajor axis (a) is half the distance AP
Answer:
The magnitude of the angular momentum at P is Lp = mp rp υp. Similarly, LA = mp rA υA. From angular momentum conservation
mp rp υp = mp rA υA
or \(\frac{v_p}{v_A}=\frac{r_A}{r_p}\) 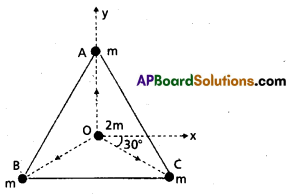 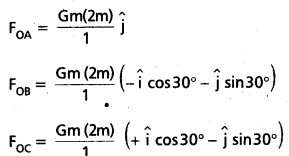 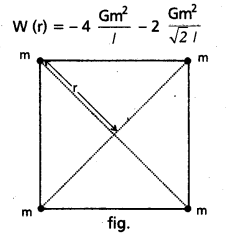 Question 4.
Two uniform solid spheres of equal radii R, but mass M and 4 M have a centre to centre separation 6 R, as shown in Fig. The two spheres are held fixed A projeetile of mass m is projected from the surface of the sphere of mass M directly towards the centre of the second sphere. Obtain an expression for the minimum speed v of the projectile so that it reaches the surface of the second sphere.

Question 5.
The planet Mars has two moons, phobos and delmos. (i) phobos has a period 7 hours, 39 minutes and an orbital radius of 9.4 × 103 km. Calculate the mass of Mars, (ii) Assume that Earth and Mars move in circular orbits around the sun, with the Martian orbits being 1.52 times the orbital radius of the earth. What is the length of the Martain year in days ?
Answer:
(i) We employ T2 = K (RE + h)3 (where K = 4π2 / GME) with the Earth’s mass replaced by the Martian mass Mm 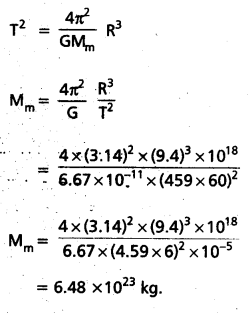 (2) The moon is a satellite of the Earth. From the derivation of Kepler’s third law 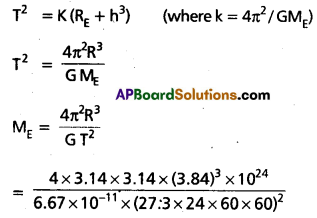