Question 1.
How do you think the warrior lost his life?
Answer:
The warrior must have fought bravely in the battle field. He must have been killed by an enemy soldier.

Question 2.
What was unnatural with the warrior’s wife?
Answer:
Even though the dead body of her husband was placed before her, she neither swooned nor uttered a cry. Her maidens did their best to make her cry but they all failed. It was unusual.

Question 3.
What did the maidens do to make her cry?
Answer:
They praised the warrior as worthy to be loved, and the truest friend and the noblest foe. A maiden took the face-cloth from the face of the dead warrior.

Question 4.
Why did they want her to cry?
Answer:
They wanted her to cry because they thought that she would die if she did not cry.

I. Here is a list of India’s neighbouring countries. Collect the information mentioned below in the table. After collecting this information display it in “Our Reading Corner” (ORC). 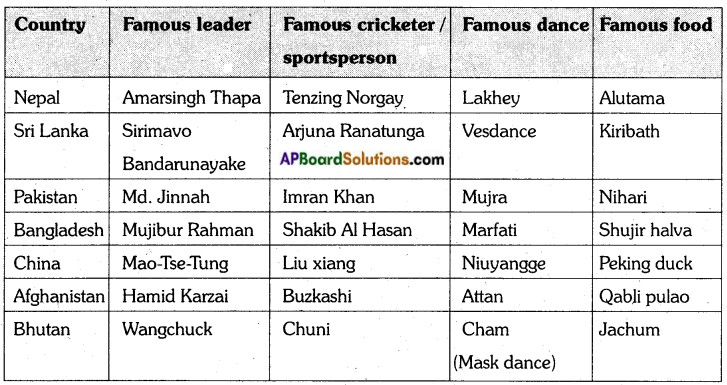 Home They Brought Her Warrior Dead Summary in English

A warrior died in a war. His dead body was brought home by some of his friends, the other soldiers. His wife was too sensitive. When she heard the news of her husband, she was greatly shocked. In her shock, she almost went into a typical semi-unconscious state. She neither fainted nor cried. The maidens, who were watching her, said that she would die, if she did not cry. They made all possible attempts to bring her to normal state.

They praised the warrior as worthy to be loved. Some praised him as the truest friend and the noblest foe. All their admiration and praising words of the soldier failed to bring her to her normal state. She did not speak a single word. She was totally unmoved.

A maiden made another attempt. She slowly went to the dead body and removed the face-cloth from his face. Her trial also failed. The state of the dead warrior’s wife remained the same. She did not move. She did not cry.

A nurse of ninety-years attempted. She put the child of the dead warrior in the lap of the woman. The touch of her child had a magical charm. The woman shed tears. She cried out that she would live for the sake of the child. She regained her full consciousness. She realised that she had to live to look after her child.

tempest(n): storm in the ocean

they (here): the other soldiers

for thee (prn): for your sake