Question 3.
Describe the activities of the Andhra Maha Sabha for the promotion of education.
Answer:
Andhra Maha Sabha combined both educational and social reform objectives. They established libraries and cultural centres all over Telangana even in remote villages. Night classes and discussions were held in these centres. Thus AMS promoted education.

Question 4.
What were the demands of the Hyderabad State Congress and how many of them were fulfilled after 1948?
Answer:
The Indian National Congress only functioned in the British India and did not function directly in the princely states. However, the common people faced more oppression and injustice in these princely states and they wanted to join the larger freedom movement of India. In such states the nationalists formed ‘state congress’ to fight for democratic rights, reforms, representative government etc. This happened in Hyderabad too. All these were fulfilled after 1948.

Question 5.
Do you think the Telangana Armed Struggle helped to end the rule of the Nizam? Give your reasons.
Answer:

Question 6.
Read the following paragraph and answer the questions: Do you support the Feudal system of the state.

The Nizams were initially provincial governors of the Mughal emperors. They ruled with the help of hereditary jagirdars and subordinate kings. Jagirdars were given control of dozens and even hundreds of villages which they ruled as they desired and collected taxes from the people. The rest of the kingdom was ruled directly by the Nizam with the help of ‘doras’ about whom you read in an earlier chapter.

The Nizams wanted to retain the old system in which the king and his nobles controlled all resources and ruled as they willed. They did not allow any democratic system like local bodies or legislatures. The Nizams opposed the Congress led nationalist movement and passed several ‘firmans’ or royal orders curtailing political activity in the state. They had a network of police and spies who kept a close watch on people.

Answer:
I do not support the Feudal system of the Nizams.
Reason: The common people were treated as slaves.

Question 8.
What questions the librarian should be asked to know about the library of your area?
Answer: 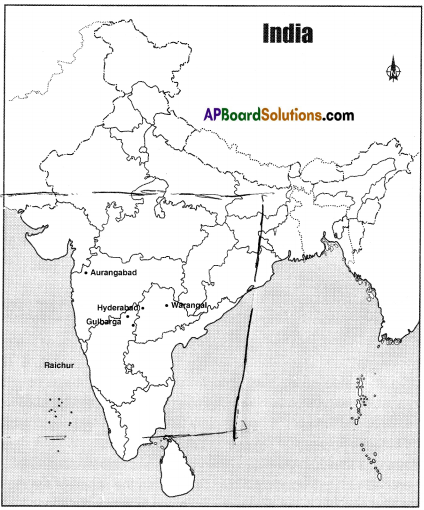 Question 10.
Collect the pictures of leaders of the Telangana armed struggle.
Answer:

Question 1.
Do you think the problems faced by the people of Hyderabad state were in some ways different from those faced by people living in British ruled states? (Textbook Page No. 142)
Answer:

Question 2.
Was there any difference between the attitude of the British and the Nizams when it came to democracy? (Textbook Page No. 142)
Answer:
No. Both suppressed the people.

Question 3.
Was Telangana Armed Struggle only for removal of the grievances of the peasants or did it have other aims? (Textbook Page No. 147)
Answer:
Initially the main demands of the peasants were limited to fight against illegal feudal exactions, levy system, excessive land refot, eviction of tenants, and for abolition of vetti. It was meant to draw all sections of the rural society (small landowners, landlords and service castes) into the struggle against the doras and the Nizam.
The movement was transformed in 1947-48 into a broad anti-feudal struggle demanding merging of Hyerabad with independent India. To broaden the scope of the movement and integrate vaious sections into it, the demand was raised to merge Telangana with the other Telugu speaking regions to create Vishal Andhra.

Question 8.
Is there a public library in your village or locality? (Textbook Page No. 144)
Answer:
Yes. There is Tagore Public Library in our city.

Question 9.
If you have been to a public library, describe what happens there in your classmates. (Textbook Page No. 144)
Answer:
When we enter the library we should sign in the visitors’ register. Then we can read the dailies, magazines there. If we have membership in that library, we can take two books to home. We should return them after a certain period.

Question 10.
Why do you think the libraries became the centres of anti-Nizam and anti-landlord movements? (Textbook Page No. 144)
Answer:
The leaders of Andhra Maha Sabha combined both educational and social reform objectives. The AMS activities spread rapidly all over Telangana and libraries and cultural centres were established in even remote villages. Peasants and labouring people came to them to learn to read, listen to newspaper, discuss current topics, and also their own problems with the Nizam government and doras. Night classes and discussions were held in these centres. People read books by social reformers like Veeresalingam and nationalists like Gandhiji, Nehru etc. They also wrote new books on local problems. As Editor of the Golconda Patrika, Suravaram Pratapareddy inspired nationalistic fervour amongst the people. Kaloji Narayana Rao, Dasarathi Krishnamacharya, Dasarathi Rangacharya are some of the literary luminaries who fought for the freedom of Hyderabad State. So the libraries became the centres of anti-Nizam and anti-landlord movements.

Question 11.
Why do you think the Nizams and jagirdars were not in favour of Telugu medium schools? (Textbook Page No. 144)
Answer:
Here majority of the officials were Muslims. The majority of the people of the state were Hindus who spoke in Telugu, Kannada and Marathi. They were suspicious of private Telugu medium schools that they would become centres for propagation of anti-Nizam ideas. All the government schools were in Urdu medium.

Question 14.
Why do you think the Nizam agreed to pass the ‘firmanas’ abolishing the feudal system? (Textbook Page No. 148)
Answer:
When India became independent in 1947, Osman Ali Khan, the Nizam wanted Hyderabad to remain as an independent kingdom. The common people of the state wanted to join Independent India and a large campaign was organized by the Hyderabad State Congress led by Ramananda Theertha. The Razakars attacked them too. Then the Indian government decided to end this anarchy and sent armed forces to Hyderabad. Hyderabad was finally integrated into Indian Union in September 1948. The Nizam however was asked by the government of India to continue as the ruler till the transition to democratic setup was complete. The Nizam was forced to abolish the feudal system and initiate democratic processes of elections.

Question 16.
Find out more about the song – Vandemataram. (Textbook Page No. 145)
Answer:
Vandemataram song – written in Bengali and Sanskrit.
Lyrics: Bakim Chandra Chattopadhyaya in his novel Anandmath – 1882.
Music: Jadunadh Bhattacharya Adopted on 24-1 -1956.
First sung by – Sri Rabindranath Tagore Translated to English – By Arabindo Ghosh
In 1950 the song’s first two verses were given the official status of the National Song of the Republic of India.

Question 17.
Find out about the life of Swami Ramananda Theertha. (Textbook Page No. 145)
Answer:
Swami Ramananda Theertha (1903 – 1972) was an Indian freedom fighter, educator and Social activist who led the Hyderabad liberation struggle, during the reign of last Nizam. He was the main leader of the Hyderabad State Congress.
He fought against the Nizam after the establishment of Congress party wing in 1938. He participated in Satyagrahas and was imprisoned for 111 days by the last Nizam. He created a revolutionary movement which helped Hyderabad to integrate with the Indian Union in 1948. The integration was successful after the Hyderabad police action.

Question 18.
What role do you think was played by the AMS in making the Telangana Armed Struggle possible ? (Textbook Page No. 147)
Answer:
Andhra Maha Sabha in the beginning supported the education and literary works. The Nizam government subjected these centres to a lot of harassment as they were becoming centres of new radical thinking. By 1940 many communists had joined the AMS and they insisted on taking up other demands of the rural people like end to vetti, land reforms, oppression by doras etc. Some of the old leaders of the AMS disagreed and wanted it to continue as educational and literary forum. Soon the radical elements gained leadership and a new movement of the peasants started.