Question 2.
Describe in a table what happened in Ravi’s case from its first hearing and session court.

Question 3.
In the context of the differences between a criminal and a civil case, write a sentence each about (a) punishment and jail; (b) government lawyers; (c) filing FIR.
Answer:

Question 6.
What are the differences between the role of the S.H.O. and the magistrate?
Answer:
S.H.O is the officer at P.S. level. Magistrate is still higher level.
S.l. should present the arrested person before the Magistrate before 24 hours.

Question 8.
A person confessed his crime at the police station and the police locked him in jail for 6 months. Is this the correct procedure? Explain your answer.
Answer:
This is not the correct procedure. He should be handed over to the court for further prosecution. The judiciary decides if the accused person is guilty or not and what punishment is to be given.

Question 9.
Can you identify different roles of the Executive and Judiciary given in this chapter?
Answer:
The police comes under the Executive. They register cases and conduct enquiry in the initial stage. Trials, evidences of witnesses, judgement all these are the duties of Judiciary.
These will not interfere in each other’s matter.

a) The column on the right provides a list of functions. Match these with the roles that are listed on the left. Have each group pick the functions that it needs to perform to bring justice to those who were affected by the violence of the Fiesta fans. In what order, will these functions be performed?

b) Now take the same situation and ask one student who is a supporter of the Fiesta Club to perform all the functions listed above. Do you think the victims would get justice if only one person performed all of the functions of the criminal justice system? Why not?

c) State two reasons why you believe that different persons need to play different roles as part of the criminal justice system.
Answer:
a) Order of the functions.

Question 1.
Can you write the imaginary details of Ravi and Samba as given below:
The complaint should contain ……………. address and details. (Refer to Textbook on Page 173 and Page 174)
(Textbook Page No. 174)
Answer:

In this case, the S.l. went to the village and began his investigation by examining the injuries suffered by Samba. The report of the hospital doctor established quite clearly that the injuries were serious. Then he questioned Ravi’s neighbours. The neighbours gave him a full account of the incident that had taken place. This established beyond doubt that Samba was assaulted and injured by Ravi.

The S.l. then went to Ravi’s house and informed him that he was being arrested on the charge of causing grievous injury to another person. He arrested Ravi and took him to the Mandal Police Station and questioned him there. Ravi flatly denied ever assaulting Samba. They tried hard to make Ravi accept his offence, but he stuck to his denial. Ravi was detained in the police lockup, so that he could be produced before the magistrate, the next day.

Question 3.
What is meant by ‘an accused’ ? In this story, who is the accused ? (Textbook Page No. 175)
Answer:
‘Someone that has done something wrong or taken part in illegal activity is known as accused. In this story ‘Ravi’ is accused.

Question 5.
Samba thought that the SHO arrested Ravi to punish him for the crime. Was he right? (Textbook Page No. 175)
No, he was not right. To punish’ is the duty of court only but not of the police. Ravi was arrested to be submitted to the court.
a) When Ravi sold Samba’s plot to another person it was …. offence, (criminal or civil)
Answer:
Civil
b) When Ravi beat up Samba it was a offence, (criminal or civil) (Textbook Page No. 176)
Answer:
Criminal

Question 7.
Fill in the table given below based on what you have understood about criminal and civil law. (Textbook Page No. 177)
Answer:

Question 9.
Kranthi says, “My Father got justice but too late.” Do you agree with him? (Textbook Page No. 182)
Answer:
Yes. I agree with Kranthi. It took 3 years for justice. This is not a reasonable period.

Question 12.
What happened in the first hearing? (Textbook Page No. 178)
Answer:
The S.l. had given a copy of the FIR and the police report to Ravi’s lawyer so that he could know the exact charges levelled against his client. From these reports, Ravi’s lawyer could also know the kind of evidence that the police had collected against Ravi. All this information would enable him to prepare a defence for Ravi, who was the accused in this case.
In the first hearing, the judicial magistrate accused Ravi of inflicting grievous injury to Samba. This offence, if proved, would entail imprisonment for 4 years. Ravi did not accept the charges. So, the magistrate ordered a second hearing of the case after 15 days.

Question 14.
Identify the location of these courts for your area with the help of your teacher. (Textbook Page No. 180)
Answer:
Our district court is in Machilipatnam and High Court is in Hyderabad.

Question 15.
Why did they wait for the SHO / S.l. to return? If you were to file such a report, what would you write in it? (Textbook Page No. 174)
Answer:
SHO/S.I. is the head of the police station. To record the F.I.R. his presence is must. So they waited for him. If I were to file such a report, I would write all the issues in the report like- What happened? How did it happen? Who was the accused? etc, I would write their names, witnesses’ names, and their addresses etc.

Question 16.
Why do you think it is important for the person who makes an FIR to take a copy of the report? (Textbook Page No. 174)
Answer:
The complaint should have the acknowledgement for his complaint. After the F.I.R. is filed it becomes the duty of the police to investigate and solve the problem.

Question 17.
What is a Fair Trial? Is it necessary? Why? Discuss. (Textbook Page No. 178)
Answer:
The rule of law says that everyone is equal before the law. Before deciding if someone is guilty she/he will be allowed to a fair and impartial public hearing. Criminal prosecution starts with ‘presumption of innocence’ and the guilt must be proved beyond reasonable doubt.
This kind of trial is known as Fair Trial. It is necessary. If the trial is not fair, the victims may lose their confidence in the judiciary. This confidence only leads the people to judiciary.

Question 18.
Discuss why is it necessary to hear the evidences given by the witnesses in any case. (Textbook Page No. 180)
Answer:
In any case the victims and the accused, support their own words in the court. So the truth may be under cover. Being third person, the witnesses uncover these truths. So it is neces¬sary to hear the evidences given by them in any case.

Question 19.
Can you think of the reasons why the session’s court may have reduced Ravi’s punishment? (Textbook Page No. 181)
Answer:
In any country the penal code is to change the attitude of the accused. The district magistrate court imposed an imprisonment of 4 years. Then he appealed to the session’s court. It took 2 years for judgement in this court. He spent half of his punishment period awaiting court decision. There is a chance of change in the behaviour of any person. So the court considered all these issues and reduced his punishment to one year.

Question 21.
Imagine that there is a big company cutting down forest and tribal cutting wood for fuel. Is impartiality a good thing? Debate. (Textbook Page No. 179)
Answer:
The tribals have natural right on forest. So they can be permitted to cut wood. They do no harm to the forests.
So we can support the tribals.
Cutting down forest by a big company is an illegal activity. So we cannot suppoi; them.

Question 22.
The structure of the court from lower to highest level resembles a pyramid. Can you fill the information about it in a diagram? (Textbook Page No. 180)
Answer: 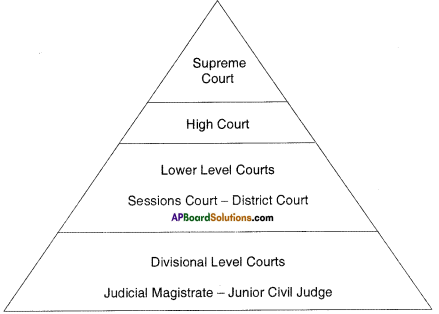