Students can go through AP State Board 10th Class Biology Notes Chapter 7 Coordination in Life Processes to understand and remember the concept easily.

→ Every life process is dependent on others to keep the body in good condition.

→ When glucose levels in the blood fall we get hunger pangs in the stomach.

→ The hormone ghrelin secreted in the stomach is responsible for hunger generating sensations.

→ Ghrelin is secreted from certain cells in the wall of the stomach.

→ Interactions between the senses of taste and smell enhance our perceptions of the foods we eat.

→ Taste can be identified easily when the tongue is pressed against the palate.

→ Food in the mouth has to be broken down into tiny pieces to increase the surface area for the action of substances that aid in digestion.

→ The fifth cranial nerve controls the movement of muscles in the jaw.

→ The mechanism for swallowing is also under nervous coordination and its control center is in the brain stem.

→ The nature of saliva is alkaline.

→ Saliva is secreted by the action of the autonomous nervous system from salivary glands. The chewing of food in the mouth forms a slurry mass called a bolus.

→ The wall of the esophagus is made up of inner layer circular muscles and the outer layer longitudinal muscles.

→ Contraction and relaxation of the muscles present in the esophagus resulting in wave-like movements called peristaltic movements.

→ The food from the esophagus reaches the stomach by peristaltic movements.

→ The partially digested food present in the stomach is known as chyme.

→ Pyloric sphincter present at the opening of the stomach and small intestine releases a small amount of chyme into the duodenum.

→ The gastric juice produced by the stomach contains mucus, hydrochloric acid, and pepsin. Food is completely digested in the small intestine.

→ Absorption of nutrients by villi takes place in the small intestine.

→ The neural apparatus of our digestive tract comprises a vast and complicated network of neurons called the second brain or enteric nervous system.

→ The enteric nervous system stimulates and coordinates the breakdown of food, absorbing nutrients and expelling wastes from the body.

→ Oxidation of food is required to release energy.

→ Respiration is controlled by the medulla oblongata of the autonomous nervous system.

→ Digestion occurs in the food canal, coordination of respiration and blood circulation is necessary otherwise oxidation of food and transport of substances will not take place.

→ Ghrelin: It is a hormone produced mainly by the cells lining the human stomach and cells of the pancreas which stimulate hunger.

→ Leptin: It is the hormone that suppresses hunger.

→ Gustatory: Concerned with tasting or the sense of taste.

→ Papillae: One of the certain small protuberances concerned with the senses of touch, taste, and smell.

→ Food Bolus: A small rounded mass of substance, especially of chewed food at the moment of swallowing.

→ Peristalsis: Contraction and relaxation of circular and longitudinal muscles in the esophagus bring a wave Like motion that propels the food bolus into the stomach by the action called peristalsis.

→ Chyme: The partly digested food in the stomach.

→ Pyloric Sphincter: Muscles present at the opening of the stomach and the first part of the small intestine and duodenum.

→ Villi: These are tiny finger-like projections that enable the small intestine to absorb nutrients from food.

→ Medulla oblongata: The continuation of the spinal cord within the skull, forming the lowest part of the brain stem and containing control centers for the heart and lungs.

→ Brain stem: The central trunk of the mammalian brain, consisting of the medulla oblongata, Ponsvaroll, and midbrain.

→ Hunger pangs: These are the contractions made by the stomach when we feel hungry.

→ Stale food: Food that is not freshly prepared but not harmful. It may not taste good.

→ Sipping: To drink a liquid by taking small mouthfuls.

→ Relish: Liking or enjoyment of the taste of something.

→ Palate: The roof of the mouth, separating the cavities of the mouth and nose invertebrates.

→ Munch: To chew with the steady or vigorous working of the jaws, often audibly.

→ MasticatIon: Biting and grinding food in our mouth so it becomes soft enough to swallow.

→ Belching: It is the emission of wind noisily from the stomach through the mouth.

→ PorrIdge: It is a dish made by boiling ground, crushed or chopped cereal In water, milk, or both.

→ Rumination: The process of rechewing the cud to further break down plant matter and stimulate digestion is called rumination.

→ Neurotransmitter: A chemical substance that is released at the end of a nerve fiber by the arrival of a nerve impulse and by diffusing across the synapse and junction. It affects the transfer of the impulse to another nerve fiber, muscle fiber, or some other structure.

→ Second brain (or) Enteric nervous system: One of the main divisions of the autonomic nervous system and consists of a mesh-like system of neurons that governs the function of the gastrointestinal system.

→ Colon: It is the last part of the digestive system in most vertebrates. It removes water, salt, and some nutrients forming stool. 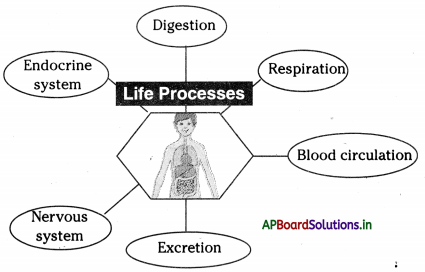 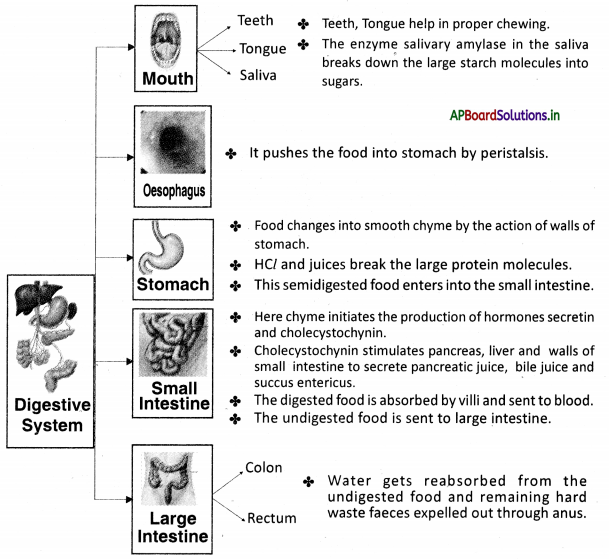 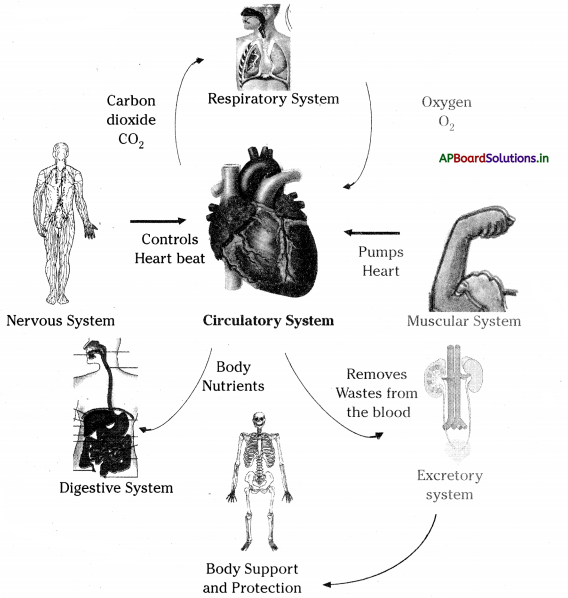